Judgment Day For The ECB In The German Courts 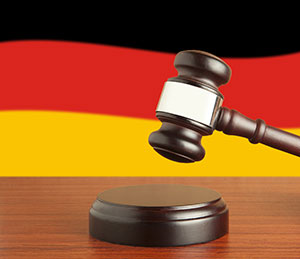 Once again we await news from the German courts, who are deciding whether or not Germany rescuing other countries by way of, for example, monetary easing is constitutional for German taxpayers. The German constitutional court will start its hearing on the legality of the European Central bank's bond buying programme at 11am local time (10am BST).

The hearing and consequences place the Bundesbank versus the ECB, Germany's top central banker Jens Weidmann, versus the country's man at the ECB, JörgAsmussen. Whether Mario Draghi's pledge to buy unlimited amounts of bonds issued, by a eurozone country that signs up for stringent economic reforms, is the simple question to which we expect an answer today.

The Swiss government has warned this morning that the eurozone recession remains the biggest single threat to its economy. In its latest assessment of its domestic economy economists at the State Secretariat for Economics (SECO) pointed to the;

"Europe's financial crisis cannot be regarded as addressed, countries in southern Europe are still relatively far from a significant economic improvement. Growing social tensions and political disagreement could inflame the debt crisis again and spark another panic in the financial markets. This could put also fresh upward pressure on the Swiss Franc – which is currently pegged versus the euro to prevent it rising too high."

As news regarding the UK's employment levels and unemployment head count breaks (unemployment rate static at 6.8% with the claimant count falling slightly) a think tank in the UK; the IFS (Institute For Fiscal Studies) has published data revealing that wage cuts in the UK are the deepest on record. Employees have sacrificed pay to keep their jobs during the 'longest and deepest' slump in a century.

Describing this downturn as the longest and deepest slump in a century, the Institute for Fiscal Studies says workers have suffered unprecedented pay cuts of 6% in real terms over the last five years, whilst the UK TUC (Trades Union Congress) puts the figure at -7.5%.

Historically, real wages rise by about 2% a year. This suggests that people are more than 15% worse off than they would have been if the pre-crisis wage trends had continued. Analysing downturns going back to the great depression, Paul Johnson, director of the IFS, said:

"This time really does seem to be different, it has been deeper and longer than those of the 1990s, the 1980s and even the 1930s. It has seen household incomes and spending drop more and stay lower longer."

The IFS believes that much of the sharp drop in pay is due to widespread wage cuts for workers staying in the same jobs, as opposed to being driven by inflation outpacing pay growth, or people losing high paid jobs and taking worse paid roles. One-third of workers experienced nominal wage freezes (or cuts) between 2010 and 2011, and 70% experienced real wage cuts.

EUR/USD has risen during the Asian and London session. Still significantly above the 200 simple moving average breached on June 1st, price has approached R1 in the morning session, but has failed to penetrate this first line of resistance with any force at the time of writing.

Cable has continued it's significant rally of recent days, having failed to breach the 200 SMA since June 6th (when cable enjoyed a surge) price is once again approaching this key moving average. The closed HeikinAshi candles over recent days, combined with price breaking through R1, could suggest that cable has further to rise over coming sessions. However, the rise since early June has been significant, in excess of 400 pips, therefore some profit taking may be advisable. Traders who have enjoyed this surge would do well to contemplate locking in profit by way of their favoured stop loss techniques.

Many analysts have taken to the wires over the past 24 hours suggesting that the Aussie may be bottoming out versus USD, GBP and yen. Versus yen the Aussie has (over recent days) breached the 200 SMA and having broken through the daily pivot point this morning price failed to gain any more momentum. Versus USD Aussie has developed a classic doji on the daily chart indicating a possible change in direction and sentiment. Whilst perhaps too early to predict a swing long, the preceding days' H.A. candle price action could suggest that fatigue is present in this currency pair's downward trajectory.

Versus yen the dollar has continued the fall which began its recent swing lower on 23/24th May. Despite pushing through the daily pivot price has so far failed to breach S1. The 200 SMA is still some distance from current price.

The expectation that the upcoming news from New Zealand late this evening will be positive for N.Z.'s economy appears to be borne out by the rise in the kiwi versus USD. Price has reversed its recent trend to penetrate R1 and create a classic doji which is beginning to take on a bullish appearance.

« Judgment Day For The ECB In The German Courts Between The Lines; Morning Roll Call »