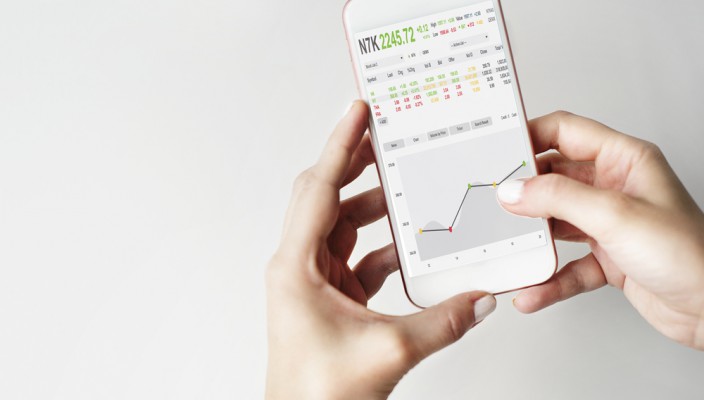 Many of us (of a certain age) were big fans of Star Trek, the original series with William Shatner playing James T. Kirk. As kids we were mesmerised by the phaser and the communicator gadgets. The most memorable message delivered into the communicator by Kirk and his trusty officers; “beam me up Scotty” has entered into the lexicon of English language. How my group of friends wished we had a mobile walkie-talkie like Kirk, when the most futuristic telephony equipment in our houses in the 1970’s was the plastic trim phone, which you could have in two dull colours, either beige, or olive.

Here we are, forty years later and we have a “communicator” that, even in science fiction scripts, would have been regarded as incredibly futuristic. It’s way beyond the capabilities of Kirk’s communicator, but now it’s taken for granted and most of us traders fail to use it to its full capacity, not just in terms of the information and communication abilities it can provide us, but the freedom it also offers up.

The strides made by the retail forex industry during the past decade or so have been outstanding; the platforms, the spreads, the speed of execution as broadband speeds have improved exponentially, however, the constant hardware developments and improvements appear to pass us by largely unnoticed.

Back in 1995 your typical home PC would have 8mb of ram, a hard drive of 1000mb, processor speeds of 33MHz and video was 24 bit and the cost of such a top of the range Dell PC would be circa $4,400. We now have (as standard) 8-16gb of ram, a terabyte of hard drive and processor speeds of 3.5GHz. Computers have improved by ten fold with prices crashing by close on the same metric; the spec outlined in the latest PC could be bought for circa $400. Comparing the evolution of mobile phones to become smartphones, during the same period of time is equally revealing; there is more power in our handheld devices now, than existed in PCs back in 1995, or even ten years back.

Despite all these massive improvements in the key tools to conduct our forex trading business, we still fail (en masse) to take full advantage of the huge developmental strides. We don’t use the tools to anywhere near their full capacity, or use them to allow the personal freedom we crave and ironically that freedom and independence is one of the main attractions that drew us to the industry initially.

Meta Quotes MetaTrader platforms have integrated seamlessly into smartphone applications, as retail traders we have a pocket rocket, in terms of a state of the artmini computer at our disposal. An underrated device that can allow us to be free from our home office and to trade and monitor our trades anywhere and at all times.

Unless you’re a scalper then you have no requirement to be chained to your home office desk. And for the vast majority of retail traders the skill, discipline and method required for scalping methods of trading shouldn’t be considered. As data has consistently proved; retail traders profit most from day trading and swing trading strategies.

So how do we make the most of our mobile smartphone technology, to benefit and potentially profit from the freedom it delivers?

Ensuring that your mobile platform mates perfectly and replicates your PC parameters exactly, is  one consideration. The mobile platform should simply be a reduced version of the full platform. In terms of power and functionality the MetaTrader mobile platform offers all the features you’ll require. Moreover, if you test the speeds of the broadband offered by 4G carriers, you’ll discover that the speeds are comparable with (if not better than) many landline broadband services. If you’ve programmed your personalised MetaTrader platform with your EA (expert advisor) through your PC, you’ll be able to monitor its performance and or make adjustments through your smartphone. Your trade orders will be executed as per your instructions, irrespective of what device you’re using to log into your platform.

If you’re not using the full EA ability of MetaTrader and you prefer to a place trades manually then should your, for example, indicator based trading strategy make you aware of a set up through an alert function then this feature will alert you via email and or SMS. More evidence if needed that you don’t have to be chained to your desk to always be on message and in a position to take trades based on your conditions and demands. So set your “phasers to stun” and trade.