The European “firewall”, though somewhat disappointing, has received agreement from major stakeholders and many sovereign debt spreads have eased off their highs. However, the risks are large, particularly as Spain appears to be struggling under strict austerity and disappointing growth. In addition, credit-default swap markets, which passed a major credibility test following the Greek debt restructuring, are still discounting Portugal’s inability to service its debt obligations.

The Sterling Pound
GBPUSD (1.5822) • Sterling is weaker, amid-performer among the majors as a result of weaker industrial production figures.   The BoE maintained both rates and the size of its asset purchase pro-gram at 0.5% and £325bn, respectively, with no accompanying statement given that policy remained unchanged (as was widely expected).

The unexpected decline in manufacturing data contrasts with the stronger PMI’s from earlier this week, and has driven GBPUSD through the previous support level at the 200 day MA (1.5848) to a new level of support at the 50 day MA (1.5821).   The expanding triangle pattern seen over the past two months increases the potential for a medium term decline below the March low at 1.5641

The Swiss Franc
EURCHF is trading at 1.20182. The Swissie has strengthened 0.2% vs the EUR, following the re- lease of   stronger than expected inflation and downward pressure on EURUSD.   EURCHF fell briefly below the SNB’s floor at 1.2000, the first such occurrence since the floor was imposed in September of 2011.    Our expectations are for the EURCHF floor to be raised in the coming months, following the selection and approval of a new SNB president.

Asian –Pacific Currency
USDJPY is trading at 81.93. The yen is stronger, having gained 0.7% from yesterday’s close, fuelled by FX patterns that suggest ongoing risk aversion. While intraday movements in USDJPY continue to oscillate around 82.00, we have yet to see a breach of the level on a closing basis.

Broader market sentiment will continue to drive USDJPY ahead of the April 8th release of current account figures, where market participants are expecting for a return to a surplus following last month’s deficit, the first since January 2009.   Market participants are also be- ginning to focus on media coverage of the selection process for the next BoJ leader (beginning in 2013).

Support for USDJPY is at 81.50, while resistance is expected at 82.50 followed by 82.80. Japan swung back to a current account surplus in February after suffering a record deficit in the previous month, official data showed. The surplus in the current account, the broadest measure of trade with the rest of the world, stood at ¥1.18 trillion ($A13.98 billion), the finance ministry said.

The current account measures the value of a country’s imports and foreign investments against the value of its overseas income such as exports of goods and services. China’s inflation edged up in March as the government shifted focus from containing politically dangerous price rises to stimulating its slowing economy. The government said on Monday that consumer prices rose 3.6 per cent over a year earlier, up from February’s 3.2 per cent. That was driven by a 7.5 per cent rise in food costs, up from the previous month’s 6.2 per cent. 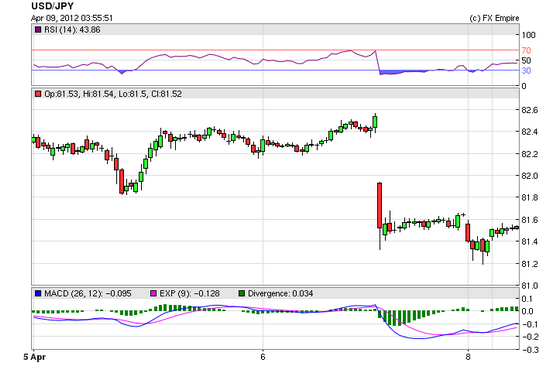 Gold
The Gold markets have been closed for the Easter holiday and will reopen in during the US trading session on Monday April 9, 2012.

Crude Oil
Crude Oil markets have been closed and will reopen on Monday April 9, 2012 during the US trading session.