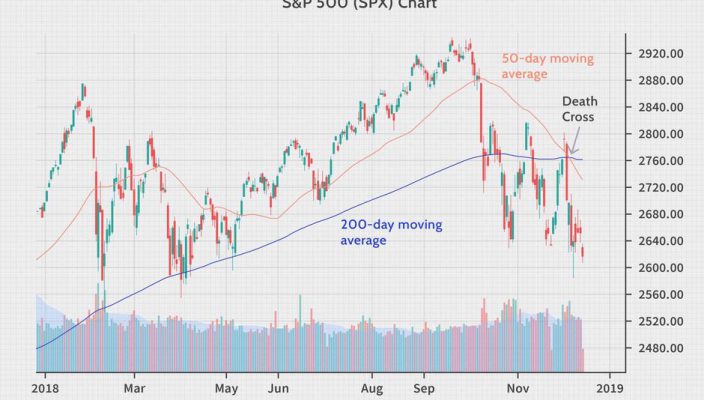 The death cross is a technical pattern that signals the end of a bull market and the beginning of a bear market. When a short-term moving average (50-day) passes below a long-term moving average, it is known as the Death Cross (200-day).

What is the Death Cross?

The pattern has previously appeared after a drop in long-term and short-term moving averages. The Death Cross indicates that momentum is weakening in the short term.

How to recognize the Death Cross?

Traders sometimes look for crossovers on shorter-term charts as an indication of a strong and continuing trend.

How to apply the Death Cross trading strategy?

When used in conjunction with other technical and fundamental analysis, the Death Cross pattern is more valuable to traders.

Trading volume is one of the most often used technical indicators for demonstrating a long-term trend shift. A major trend change is caused by increased trading volume, implying that more investors are buying or selling.

It is considered a more trustworthy indication if the Death Cross happens in combination with significant trade volumes.

Trend confirmation may also be done with momentum oscillators like the MACD. Because the momentum of a long-term trend frequently goes away before the market turns, they did well.

Smaller periods, such as the 5-period and 15-period moving averages, are widely used by day traders to trade intra-day Death Cross breakouts.

The chart’s time interval can be changed from 1 minute to a week or month. The Death Cross signals are stronger and remain longer when the chart timeframe is greater.

Because the Death Cross pattern is frequently a lagging indication, some traders don’t put too much faith in it.

It’s possible that the downward moving average crossing won’t materialize until the trend has turned from bullish to negative. Before the crossing death signal, the price of an asset may have already dropped significantly.

The Death Cross is a powerful bearish pattern that gives entry and exit possibilities. The Death Cross should be used in conjunction with other technical indicators to increase its effectiveness.

Because it’s a bearish pattern, it solely delivers sell indications. Traders, on the other hand, can exit long positions whenever the Death Cross appears.

The Death Cross predicted many previous market crashes. This demonstrates that the pattern can predict trend shifts. However, no indication is perfect. Thus the Death Cross should be used in conjunction with other technical indicators.