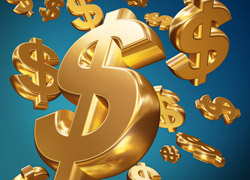 Gold Gets Clobbered by the USD

May 31 • Forex Precious Metals, Forex Trading Articles • 1337 Views • Comments Off on Gold Gets Clobbered by the USD

The yellow metal has came under severe pressure with the Euro wobbled by a rating cut of Spain by Egan-Jones from “B” to “BB-“ which was the third round of down gradation by the agency in less than a month. The Euro has been hammered by the news that led the shared currency to its 23-months low of 1.2461 and is still expected to prolong its weakness.

Gold, set for a fourth monthly decline in the worst run since 1999, dropped for a second day as concern that the debt crisis in Europe was escalating strengthened the dollar as a haven. Spot gold lost as much as 0.6 percent to a one-week low of $1,545.88 an ounce, and was at $1,547.93 at 12:24 p.m. in Singapore. Bullion fell 1.6 percent yesterday, the most in three weeks, as the dollar rose to the highest level since September 2010 against a six-currency basket.

Asian equities slipped today morning hurt by the Spanish woes of a destabilized banking. We therefore expect gold to dip further amid the Euro plight. Concerns are now shifting from Greece to Spain where new bonds will be issued to fund the poor lenders and indebted regions. This may feed in to more anxiety as the country’s refinancing ability may ruin and push borrowing cost to over 7%, a level that is unsustainable. The European commission today will be setting out its strategy pointed for Spain and Italy to balance growth with fiscal consolidation. Besides, reports today from the Euro zone are likely to indicate an obstructive business climate, while the economic, consumer and industrial confidence may remain faint. Hence, Euro is expected to resume its feebleness which will drag the metal down. The metal’s investment demand is also getting weakening since March 2012 and that could be one major reason for gold to lose its sheen. The weak demand is largely attributed to weak consumption by India. Broader fundamentals are seemed to be weak as the continued rupee depreciation increased the landed cost and lessening the import demand for the metal. We therefore recommend remaining short for the metal for the day.

Silver futures prices are also trading at a weak note at the Globex platform. The Asian equities slipped followed from the unexpected credit rating down gradation of Spain for the third time in less than a month and that would have continued to keep the Euro under pressure. As discussed in gold’s outlook, concern has now shifted from Greece to Spain whose bond yield neared 7%, a level that is unsustainable. Reports today from the Euro zone are likely to indicate an obstructive business climate, while the economic, consumer and industrial confidence may remain faint. Hence, Euro is expected to resume its feebleness which will drag the metal down for the day.