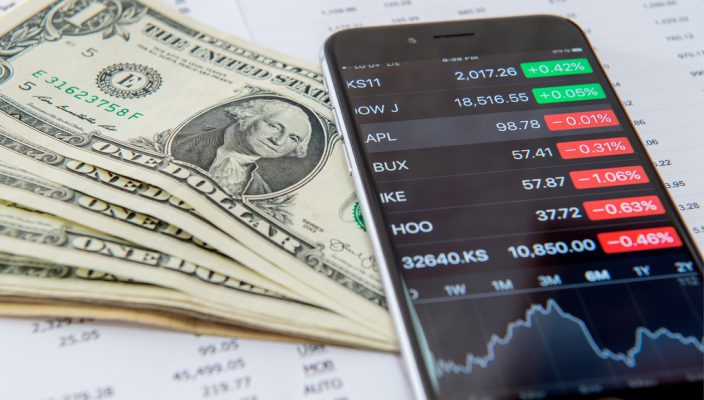 Will U.S. equity indices continue to reach record highs at the expense of the U.S. dollar?

The U.S. equity markets maintained their gravity defying rises last week as the DJIA, SPX and NASDAQ indices all continued to take out record highs. It’s worth noting that the DJIA finally broke through the 20,000 level in January 2017 and here we are, thirty months later and 27,000 has been breached representing a thirty-five percent rise. The rise in the NASDAQ has been more stunning, the tech-index has risen by circa 60% during the same period with the FAANG stocks accounting for the majority of the growth.

The corporate tax cuts the Trump administration introduced are the key factors causing such stellar rises due to increased investment into financial markets in search of dividends and yield, the market rises are not as a consequence of economic growth. As several  major corporate firms in the USA publish their latest reports and earnings this week it’ll be fascinating to note if this fiscal stimulus has continued to juice the markets, or if the boost first noted in the 2018 earnings season is beginning to fade.

The corporate tax rate was lowered from 35% to 21%, as some related business deductions and credits were also reduced or completely eliminated. But despite the massive cuts GDP growth has failed to experience a significant, sustained boost, adding to the criticism that the tax-cuts were lob-sided as the trickle-down effect appears to be marginal.

Although the USA government apparatus will continually stress the record low unemployment and employment figures as signs that the USA economy is buoyant, Wall Street has powered ahead whilst Main Street remains in the doldrums. According to certain data from Pew Research approximately 40% of USA households can’t lay their hands on circa $400 for an emergency without resorting to borrowing and approximately 40 million Americans receive food-stamps in order to eat. 17% of American children live in poverty.

The concern that the supposed economic boost is contained at elite level and financial markets, could be a factor in the Fed Chair Jerome Powell’s belief that the USA economy may need monetary stimulus by way of an interest rate cut in July. During his recent Capitol Hill testimony he stressed: global trade concerns, weak USA manufacturing growth, low inflation and weak GDP as reasons to potentially lower the key interest rate below the current 2.5% level. His remarks caused a further sell-off in the value of the USA dollar across the board.

Other than the latest advanced retail sales data for the USA and industrial/manufacturing production figures to be published on Tuesday July 16th, it’s a relatively quiet week for economic calendar events and data specific to the USA. Several Federal Reserve Presidents and officials are set to deliver speeches and these will be closely scrutinised due to the belief that the FOMC are now odds-on to lower the rate at the end of July.

Monday July 22nd is scheduled to be the day the Tory party reveals the voting decision by their members to elect their next leader and the default prime minister of the U.K. The odds are on the divisive figure of Boris Johnson winning the vote. During the build up this week the speculation surrounding sterling may increase, as FX market traders begin to position themselves for the outcome. Assuming Johnson isn’t playing to their right-wing voters by threatening a no-deal exit by October 31st, then the predictions for the value of GBP look ominous.

In the event of a no-deal exit certain analysts at investment banks predict GBP parity with the euro and U.S. dollar irrespective of any monetary policy adjustments by the ECB and FOMC, as the BoE are also likely to lower rates to fend of any impending Brexit recession. Economic calendar events for the U.K. this week includes: employment and unemployment data, the latest CPI reading, government borrowing statistics and retail sales. All data prints could alter the value of GDP if the metrics miss or beat the forecasts by any distance.

Eurozone news this week mainly centres on CPI figures and various Zew sentiment readings. If the inflation figure comes in at the Reuters forecast of 1.1% YoY growth when the data is published on Wednesday July 17th at 10.00am, then speculation could increase that the ECB has the slack and justification to lower the interest rate in order to stimulate growth in the bloc. Therefore, the value of the euro might alter depending on the inflation figure.

Other notable calendar events this week includes Canada’s CPI which is forecast to fall to 2.0% from 2.4% YoY when the figure is revealed on Wednesday afternoon, a reading which could increase speculation that the Bank of Canada could lower the main interest rate. Japanese CPI is forecast to come in at 0.7% YoY which could (once again) cast doubts on the effectiveness of the four-arrows Abenomics growth and stimulus measures.

« What a Poker beating algorithm can teach FX traders China’s GDP falls to a twenty-seven year record low, as USD continues to fall in correlation with rising USA equity markets »