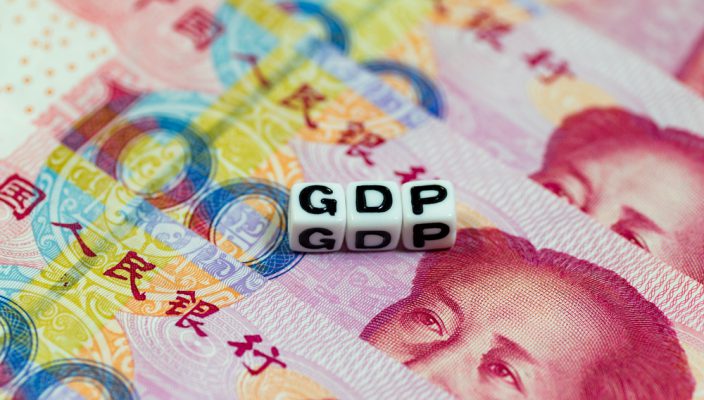 China’s year on year GDP growth came in as forecast by Reuters at 6.4%, the quarterly figure of Q2 did beat the 1.5% forecast by coming in at 1.6%, ahead of the Q1 reading of 1.4%. Analysed in isolation the Q2 figure was the lowest in 27 years, since 1992. The improvement between the Q1 and Q2 figures caused analysts and traders to consider that China’s economy may have reached the bottom of its recent, tariff induced slump. Other Chinese data indicated a modest improvement in the globe’s second largest economy as industrial production and retail sales also beat the various news agencies’ predictions.

At 8:45am U.K. time the yuan traded down -0.10% at 6.874. The antipodean currencies rose versus their peers as a consequence of the improved Chinese data, the economic performance of Australia and New Zealand are closely linked to China’s economic growth. At 9:00am U.K. time AUD/USD traded up 0.25% reclaiming position above the 0.700 handle at 0.703 as price threatened to breach the first level of resistance, R1. Meanwhile NZD/USD traded up 0.52% at 0.672 breaching R2. Analysts and traders will closely monitor the latest New Zealand CPI figure when the reading is published at 23:45pm U.K. time. The forecast is for a rise to 1.7% from 1.5% which could cause further appreciation of the kiwi dollar, if analysts belief the RBNZ have the required justification to raise the key overnight interest rate above the current 1.50% rate.

USD continued its recent sell-off versus the majority of its peers during the early trading sessions. Increasing bets that the FOMC will reveal a rate cut from the current 2.5% level when its two-day meeting concludes on July 31st, have caused the recent slump. The dollar index remained fixed below the 97.00 handle at 96.80 down -0.02%. USD/JPY traded in a tight daily range oscillating near to the daily pivot-point, close to flat and below the 108.0 handle at 107.95. USD/CHF also traded in a tight, daily range with a bearish bias, down -0.05% at 0.983. Futures markets for U.S. equity indices were indicating further record highs for USA stock markets when New York opens; SPX up 0.08% and NASDAQ up 0.04%.

The feel-good factor of U.K. citizens is closely aligned with house prices. Many analysts claim that the phenomenon of ever-increasing prices keeps the wheels of U.K. commerce turning. The trickle down effect works something like this; as prices rise home-owners engage in refurbishment projects generally by the process of taking on more debts. Therefore, they’ll engage service firms to carry out their refurb projects and perhaps indulge in retail shopping to furnish their new extensions and developments. When house prices fall it can be an indication that U.K. citizens have reached their maximum debt threshold and begun to doubt the ever increasing house-price paradigm. Therefore, house sales, service demand and retail sales suffer.

The online agency Rightmove provides an asking price index, it reported on Sunday morning that asking prices have fallen by -0.2% in July and -0.2% year on year. Naturally, the catch-all excuse of Brexit is being used to explain away the modest house price fall. However, the stagnation may be due to prices being simply out of reach for the majority. Only low interest rates are preventing a rush to exit the highly illiquid market, listings in London are down -18% with the average price of a home in London costing close on 15 times annual salary.

Partly as a consequence of the house price data, at 9:45am GBP/USD traded down -0.12% at 1.255 as price traded in a tight range with a bearish bias, close to the daily pivot-point. Sterling fell versus its peers with the largest fall occurring against both antipodean currencies, GBP/NZD traded in a deep, bearish, daily channel down -0.53% at 1.868 as price breached S2 and threatened to reach S3.

Analysts are beginning to price sterling based on the outcome of the Tory party leadership contest. The result is expected on Monday July 22nd and Boris Johnson is widely predicted to become the new leader and automatically the prime minister of the U.K. Due to his commitment to leave the E.U. by way of a no-deal process if necessary, forex markets may continue to collectively sell-off the U.K. pound this week. Particularly if the opinion gathers traction that the Bank of England will have to cut the base rate below 0.75%, in order to prevent a Brexit induced recession.

« Will U.S. equity indices continue to reach record highs at the expense of the U.S. dollar? Don’t ignore the evidence, part-time forex traders are the most successful »