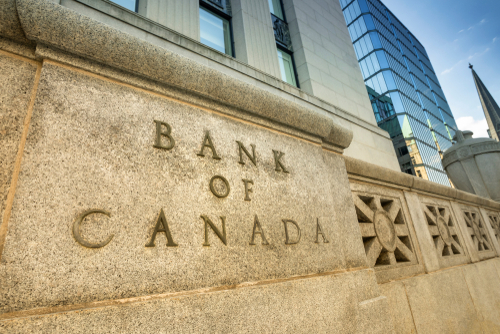 Whilst the BOC bank of Canada is widely tipped to maintain its interest rate at 1.75%, speculation in the Canadian dollar might increase

Mar 5 • Forex Trading Articles, Market Commentaries • 1369 Views • Comments Off on Whilst the BOC bank of Canada is widely tipped to maintain its interest rate at 1.75%, speculation in the Canadian dollar might increase

At 15:00pm U.K. time on Wednesday March 6th, Canada’s central bank, the BOC, will announce its decision regarding its latest interest rate decision. The current interest rate for the globe’s eleventh largest economy is 1.75%, a level which has been maintained since the BOC wrong footed analysts and FX traders in October 2018, as they raised the rate by 0.25%. The rate is currently higher than at any time since December 2008.

Policymakers in the BOC, stated in their last monetary policy statement in January, that more interest rate hikes might be needed in the medium term, in order to keep inflation in a neutral range and close to their 2% target, CPI is currently at 1.6%. However, in their opinion, such rises would be dependent on economic factors such as: consumption, housing, global trade policy developments, potential oil price shocks, the evolution of business investment and the Bank’s assessment of Canada’s overall economic capacity. Therefore, the overall tone, whilst appearing to be hawkish, was on closer reflection, more nuanced and erring to the side of caution.

As always; it’s not necessarily the rate setting announcement that can cause the domestic currency to move versus its peers, it’s often the monetary policy statement which accompanies the broadcast, or the press conference that is held shortly after, at which the Governor of the central bank will outline monetary policy, that can cause the currency and equity indices to move.

At 12:30pm U.K. time on Tuesday March 5th, USD/CAD traded up 0.28% at 1.334. Trading in a narrow range, price had breached R1. The currency pair whipsawed in a wide range during the month of February, weekly the commodity currency pair is trading up 1.32% and up 0.97% monthly. Price is currently trading significantly above the 200 DMA, sited at 1.316, a level not visited since the start of March.

The rate setting announcement and statement occurs during a peak trading period, therefore, as the release and statement are published, the Canadian dollar is likely to come under intense focus and speculation. Traders who specialise in trading CAD, would be advised to diarise this high impact, calendar event, in order to monitor their current positions, or to make decisions regarding trading the event.