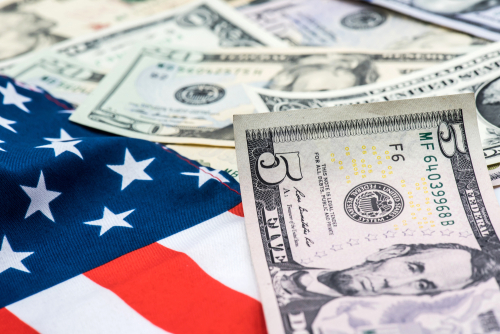 Positive fundamentals for the USA economy, fail to lift U.S. equity indices, as the U.S. dollar rises versus its major peers

With all the geo political tensions taking centre stage over recent days and weeks, FX traders could be forgiven for taking their collective eyes off the ball, in relation to the economic calendar. The issues for the USA concerning: the North Korea summit ending in failure, the China-USA trade talks fading and Trump’s personal lawyer washing their dirty linen up on Capitol Hill, have diverted analysts’ and FX traders’ attention away from the economic calendar.

A reminder of how important it is to diarise economic calendar events, came in the form of extremely positive readings on Tuesday afternoon, that beat the forecasts and targets by some distance, whilst impacting positively on the value of the U.S. dollar. New home sales smashed the Reuters forecast; registering a 3.7% rise in December, versus an expected fall of -8.7%. The latest non manufacturing-services ISM reading recorded a rise to 59.7 for February, beating the Reuters forecast of 57.3, rising significantly from the 56.7 printed for January.

The dollar rose as these latest metrics were broadcast, most notably USD/CHF rose through the first two levels of resistance, whilst threatening to reach R3. At 18:30pm U.K. time on Tuesday, the major pair traded up 0.60% on the day, continuing a positive move for the pair, often referred to as the Swissy, after whipsawing in a wide range, oscillating between bullish and bearish tendencies, during the majority of February’s trading sessions. USD traded up 0.30% versus the euro, and up 0.35% versus Canada’s dollar. The dollar index, the DXY, traded up 0.17% at 96.85. The U.S. market indices closed down marginally, the SPX closing down 0.11% and the NASDAQ closed down 0.02%.

Staying on the subject of North America, Canada’s dollar came under pressure during Tuesday’s sessions; resignations in government, a general lack of trading data confidence and concerns that the BOC may signal a more dovish position, after they announce their interest rate decision during Wednesday’s trading sessions, caused the Canadian dollar to fall versus several peers. USD/CAD traded at 1.333, breaching R1, up 0.25% on the day at 19:15pm. The BOC is widely expected to maintain the interest rate at 1.75%, however, as always, it’s often the accompanying monetary policy statement and or the press conference held shortly after the announcement, which can cause the relevant currency to move.

USA economic calendar news for Wednesday concerns the latest balance of trade deficit, Reuters are forecasting a -$57.8b deficit for December, worsening from November’s recording of -$49.3b. Once again, such numbers illustrate the dire position the USA finds itself in, with regards to its various trade deficits with its peer countries. The ADP jobs number, generally regarded as an indication of the NFP jobs number which follows at the end of the same week, is forecast to reveal only 190k jobs created in February, falling from 213k in January.

Late in the New York session at 19:00pm U.K. time, the Fed publishes its Beige Book. More formally called the Summary of Commentary on Current Economic Conditions, it’s a report published by the United States Federal Reserve Board, eight times a year. The report is published in advance of meetings of the Federal Open Market Committee. The report is often regarded as an adjunct to the FOMC minutes and their latest monetary policy statement.

Sterling gave up some of its recent gains during Tuesday’s trading sessions. The fall could be related to a combination of profit taking and remarks from the Labour Party opposition that they had no intention of backing the withdrawal agreement, that was voted down by record numbers in January. Once again, the suspicion has arisen that Mrs. May has simply delayed the process, whilst trying to blackmail MPs to accept the original offer, if not voted through, then the U.K. crashes out under a no deal scenario.

The lack of Brexit political developments, may have caused currency pairs, such as; EUR/GBP and GBP/USD to whipsaw in wide ranges, throughout the day’s trading sessions. For example; EUR/GBP breached R2, to then give up the daily gains, falling back through the daily pivot point, trading down 0.25% on the day by 19:30pm. A similar pattern emerged with GBP/USD; after falling through the second level of support, cable recovered to trade above the daily pivot point and trade close to flat on the day, at 1.317. The FTSE 100 closed up 0.67%. The CAC closed up 0.21% and the DAX up 0.24%.

« Whilst the BOC bank of Canada is widely tipped to maintain its interest rate at 1.75%, speculation in the Canadian dollar might increase Aussie dollar slumps as GDP growth falls in Q4. Focus turns to Canada’s interest rate announcement on Wednesday and Mario Draghi’s press conference, set for Thursday afternoon »