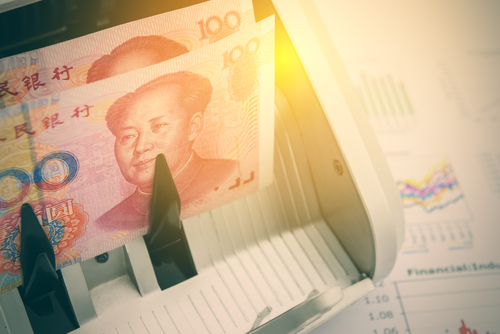 During the Asian session, the Chinese authorities at the annual Chinese National People’s Congress, announced a fall in the projected rate of annual GDP growth, from 6.5% to 6.0%, the lowest growth rate projected since 1990. The Chinese government announced a massive fiscal stimulus to counter the pressures, including: lowering corporate tax rates, reducing VAT rates and committing to a huge countywide infrastructure spend, in order to stimulate growth.

China’s GDP versus its deficit will rise to 2.8% as a consequence of the fiscal stimulus, still significantly below that of its peer countries. The current national debt v GDP is currently 47.6% and inflation is running at 1.70%, with China hoping the stimulus will raise the CPI rate to 3%, in the medium term. China’s Caixan services index came in at 51.1, missing the forecast of 53.5.

Chinese equity markets reacted positively to the fiscal stimulus, policy news; the Shanghai composite closed up by 0.88% and the CSI closed up 0.58%. At 8:50am U.K. time on Tuesday, USD/CNY traded up 0.04% at 6.707. The Chinese govt. and authorities avoided blaming the trade and tariffs spat with America as the reason for the reduced growth target, however, analysts, investors and FX traders, will be looking for concrete evidence that a resolution has been found, in what appears to be open ended discussions between China and the USA, with no detail emerging of any actual agreement.

As forecast, Australia’s central bank, the RBA, announced they’d kept their cash rate at the record low of 1.5% for a record period of inactivity. The impact on the value of the Aussie dollar was benign, as the currency rose or fell by small margins, versus its peers; AUD/USD traded down 0.16% at 0.707, as USD strength grew across the board during the Asian and early part of the London-European session, with the dollar index DXY, trading up 0.10% at 96.73. USD/JPY traded up 0.21%, close to the first level of resistance, R1 and just below the critical psyche handle of 112.00, at 111.97.

A raft of IHS Markit PMIs, relating to the Eurozone economy, were published on Tuesday morning, the readings for: Italy, Germany and France largely beat the forecasts, with the E.Z. composite PMI reading coming in at 51.9 in February, increasing from 51.4 in January. The euro reacted positively to the PMI news releases, EUR/USD recovered some of its previous session losses, trading close to flat at 1.132, down 0.24% monthly. EUR/GBP traded down 0.12% at 0.859, the currency cross pair is trading down 2.12% monthly.

Investors and FX traders will now begin to focus their attention on the ECB rate setting announcement, scheduled for release on Thursday and any accompanying press release and monetary policy narrative, delivered by president of the ECB, Mario Draghi. France’s CAC traded up 0.13% in the morning session, whilst Germany’s DAX traded up 0.21%, year to date the CAC is up over 11% and the DAX up approx. 10%.

The U.K. services PMI beat the forecast of 50.0 when published on Tuesday morning, by coming in at 51.3 for February, rising from 50.1 in January. As a consumer driven economy, which is circa 80% reliant on consumers’ continued spending, the services PMI is one of the most closely watched Markit readings, relating to the U.K. economy. Despite the positive reading, Markit reported that job declines are at an seven year high in the services sector, more worryingly, several analysts concluded that the U.K. economy is on course for 0.1% growth in the first quarter of 2019, based on the cumulative PMIs, which Markit has published over the past week.

The U.K. FTSE was trading up 0.35% shortly after the release was broadcast, whilst sterling made modest gains versus several of its peers, as the reading was published. GBP/USD recovered part of its previous daily losses, trading flat at 1.318, close to the daily pivot point, up 1.9% monthly, but down 0.56% weekly.

At 10:00am U.K. time, USA equity market futures were up, indicating a positive open for the New York session; SPX up 0.23% and the NASDAQ up 0.29%. FX traders will turn their attention to the latest ISM non manufacturing services reading, to be published at 15:00pm. The Reuters forecast is 57.3 for February, a rise from the 56.7 reading, recorded in January. The ISM reading ranks far higher amongst analysts who cover the USA economy, than for example the Markit PMI. New home sales in the USA are forecast to have fallen by -8.7% in December, after increasing by 16.90% in November.

« U.S. equity markets sell off suddenly as investors question China-USA trade talks progress, sterling slips in late trade Whilst the BOC bank of Canada is widely tipped to maintain its interest rate at 1.75%, speculation in the Canadian dollar might increase »