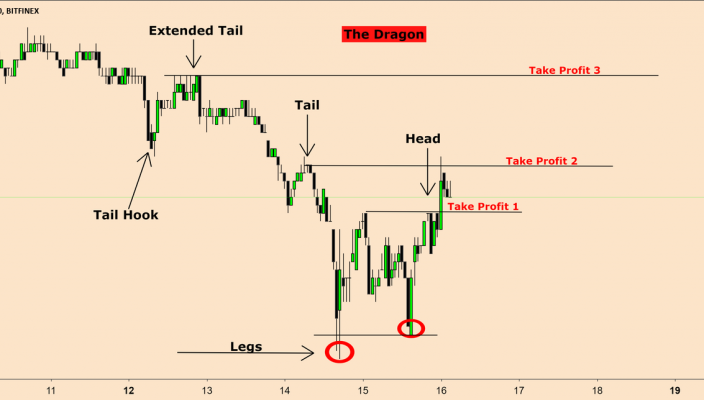 Dragon is a reversal pattern related to technical analysis in Forex. It is a candlestick pattern that indicates the beginning of a trend reversal. It points out the change from a bearish market to a bullish one.

Recognizing the Dragon Patter on the Chart: How does it form?

This pattern forms when the market starts to fall. A “head” represents the start of its decline. Once the head is established, the market starts falling from the point. This forms two consecutive lows on the chart called “dragon feet”.

There is a peak between the Dragon’s feet or before the second low called the “dragon’s hump”. So, we get a pattern of “hump-foot-hump”.

How Can You Use Dragon Pattern to Trade?

When using the dragon pattern in the forex market, open the position after the pattern is formed, once the price breaks the trend line or the hump pattern. Wait for the closing price to be above the line so that you may not enter the market on a false breakout.

Place the stop-loss order a few pips below the feet of the dragon. The dragon tail length represents the potential profit in pips.

If you are using the dragon pattern to trade, it is better to enter the market with more than one positions at the same time. However, you can start with low initially and keep your profit objective low, for example, at the height of the dragon’s Feet.

The second profit objective can be at the “Head Level”. Break down the profit estimations into small portions. This will make it easy to achieve your desired goals.

Once the first profit target is reached, move the stop-loss to the breakout level. Once the price reaches the middle of the hump in the dragon pattern, set a safety stop-loss at the feet level.

This lowers the risk and allows the trader to yield maximum profit from a position.

Alternative use of dragon method

An alternative method is to use Fibonacci levels to determine the preferred take profit values. For this, we apply Fibonacci Grid on the dragon pattern, starting from Feet to Head.

The same opening and following the positions apply for the uptrend in the reverse dragon pattern. Thus, the difference exists only in short positions.

There are some other indicators as well that prove the authenticity of the trade signal by Dragon pattern. Some of them are,

It is very rare to see a change in the basic market direction. Therefore, the dragon pattern is formed on the rules applied for determining these reversal points, which permits the traders to open a position at the beginning of a new price trend.