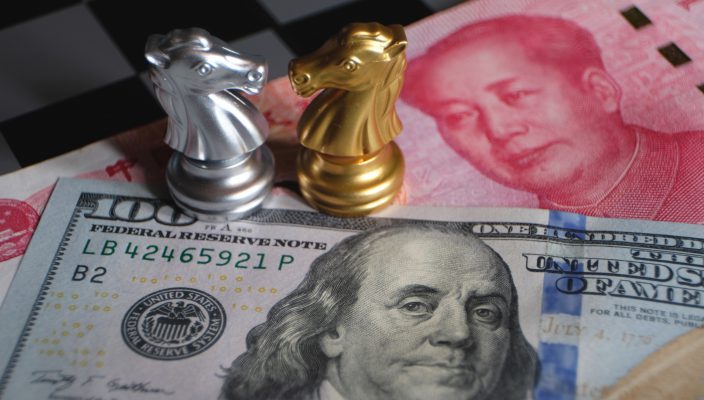 WTI oil slumped by up to 4% yesterday after both Iran officials and President Trump intimated that a negotiation was possible in order to avoid future conflict. Many analysts were surprised by this sudden Trump climbdown, which represents a departure from his usual grand-standing rhetoric. However, no sooner had his remarks; that the USA had no intention of becoming embroiled in regime change in Iran been voiced in a cabinet meeting and his sights were immediately turned on China.

On Tuesday he said the globe’s largest economies have a “long way to go” on trade, suggesting that the U.S. could follow through on earlier threats and impose sanctions on an additional $325 billion worth of Chinese goods. The comments come as Washington and Beijing are looking to restart negotiations on a trade deal after Trump and Chinese President Xi agreed not to escalate tensions after placing tariffs on billions of dollars’ worth of tariffs on both countries’ imports over the past twelve months. In an indication as to how sensitive the USA economy is to the issue of tariffs the leading U.S. equity markets sold-off marginally during the latter parts of the New York session on Tuesday. After disappearing from the news radar for several weeks market participants will carefully monitor the USA v China tariff situation to ascertain if Trump intends to follow through on his revisited threats.

The Shanghai Composite index closed down -0.20% and at 8:40am U.K. time the futures prices for the leading equity indices were indicating a positive open for the New York session; SPX up 0.11% and NASDAQ up 0.19%. The U.S. dollar index, DXY, traded close to flat at 97.39 providing an indication of the tight daily ranges USD traded in versus the majority of its peers, during the early part of the London-European trading session. USD/JPY traded up 0.01% and USD/CHF traded up 0.07% as both major currency pairs oscillated close to the daily pivot-point.

The tight, daily, range trading in FX markets was evident across the board for the majority of major pairs and cross pairs as traders struggled for fundamental reasons to justify shifting currency values in a particular direction. The only significant movements recorded in the early sessions came courtesy of the kiwi dollar, which rose versus many of its currency peers. NZD/USD traded up 0.29% as a consequence of global dairy prices increasing. Farming and the export of dairy products, particularly to China and wider Asia, forms a significant part of New Zealand’s economic activity.

The key Eurozone indices and the leading U.K. index traded down in the early stages of the London-European session as the renewed concerns over Chinese tariff issues extended to global markets. At 9:00am the FTSE 100 traded down -0.22%, Germany’s DAX down -0.20% and France’s CAC down -0.16%. EUR/USD traded in a narrow range as the euro failed to make gains versus any pairs. The major pair traded up 0.04% at 1.121.

Sterling failed to recover from its recent slump and at 9:10am the major pair referred to as “cable” traded in a tight range below the daily P.P. and close to flat, just above the 1.2400 handle at 1.241. FX traders of GBP will be counting down the days until the new prime minister is installed on Monday July 22nd. Betting markets expect it to be Boris Johnson, a vowed eurosceptic who continues to threaten a calamitous no-deal exit from the European Union.

In a day likely to be dominated by CPI reports from the U.K. the Eurozone and Canada, at 9:30am the key U.K. inflation figure came in at 2.00% annually and 0.00% for June. The June figure falling from 0.3% in May could suggest the U.K. economy is beginning to stagnate which could encourage the Bank of England to engage in monetary stimulus measures. Focus will quickly turn to Canada’s latest monthly and yearly CPI figure scheduled for publication at 13:30pm U.K. time as Reuters forecast a monthly fall to -0.3% taking annual inflation down to 2.0%.

Canadian GDP growth annually has reduced down to 1.3% from a recent 2017 high of 3.8% with Q1 coming in at 0.1%. If the CPI predictions prove to be correct then FX analysts and traders will begin to speculate that the Bank of Canada has the slack and justification to cut Canada’s key interest rate from its current level of 1.75%, in order to stimulate the economy sooner rather than later.