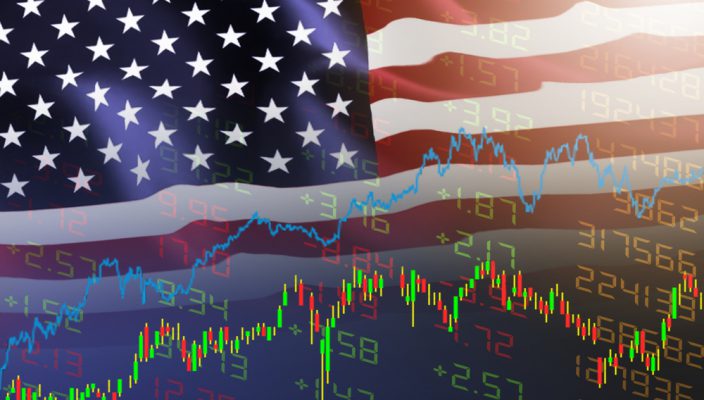 U.S. equity indices register a second day of losses as investors seek refuge in gold as a safe haven

Analysts and market commentators are fearing that the impact of the tax reduction stimulus first felt during the 2018 reporting reason could now be fading. The flip-side to the negative predictions which many analysts from specific firms and the wider community have made, is that any significant beat of the underwhelming forecasts over the coming weeks could be translated as bullish and cause a boost in equity values.

Investors are currently combing through the information at hand which suggests profits are up as are the earnings, but not as much as the collective market-makers need in order to justify higher values. The tax cuts aren’t causing the long-term stimulus politicians and the Fed had hoped for. Moreover, the tax gap which the U.S. government will have to bridge as the deficit and national debt keeps on rising, arguably defeats the purpose of diverting funds to private shareholders.

The only significant economic calendar data published for the USA economy on Wednesday concerned the housing market. Housing starts fell by -0.9% in June and housing permits, arguably a leading indicator revealing the demand for new housing in the USA during peak building season, fell by -6.1% in June missing the Reuters forecast of a 0.1% increase. Such a negative reading fuels the concerns and suspicions that USA growth is mainly consigned to financial markets.

WTI oil sold off on Wednesday failing to recover any of the losses recorded during the previous day’s session, which came courtesy of both Iran and the USA governments suggesting they were open to discussing a truce with regards to the sanctions the USA has imposed. WTI oil traded down -1.86% at $56.55 per barrel, the recent slump has caused the 200 and 50 DMAs to converge as the weekly fall has registered losses of -6.83%. Gold, XAU/USD, has risen to six-year highs over recent weeks which could be considered as an indication that investors are seeking refuge in safe haven assets, due to their overall distrust of equity markets. During Wednesday’s sessions gold traded in a bullish channel up 1.40% on the day taking the monthly gains to 5.69% and the yearly gains to 16%.

The major U.S. dollar currency pairs traded down and in tight, daily ranges against the majority of their peers, the lack of positive price-action for USD was reflected in the value of the dollar index, DXY, which traded in negative territory throughout Wednesday’s sessions and at 8:45pm U.K. time traded at 97.22 down -0.18%. USD/JPY traded down -0.13% and USD/CHF down -0.08%. The Canadian dollar rose by 0.30% versus USD as the monthly CPI figure came in ahead of forecast at -0.2%.

EUR/USD traded up 0.13% at 1.123 as USD bearishness engulfed the forex markets. The largest fall USD experienced was versus the kiwi dollar, NZD/USD traded up 0.50% as the latest positive dairy auction prices best forecasts. Positive farming metrics generally prove to be bullish for the New Zealand economy based on its reliance on the export markets of: Australia, China and wider Asia.

GBP/USD reversed its series of losing days which had previously seen the major currency pair crash through the handle of 1.2400 for the first time since 2017. At 21:10pm the major pair traded at 1.243 up 0.25% oscillating close to the daily pivot-point. The gains came as a consequence of USD weakness as opposed to overall GBP strength across the board, versus its other peers sterling mostly traded flat or registered modest gains.

Thursday July 18th is a light day for significant economic calendar events and data releases, the U.K. statistics agency the ONS will public the latest retail figures, analysts and traders will carefully monitor the data when released at 9:30am U.K. time to establish if the issue of Brexit and overall economic stagnation is extending to consumers’ motivation to shop.

The customary weekly and continual unemployment claim figures will be published for the USA at 13:30pm U.K. time, there is no expectation for significant change. Late evening-early Friday morning the latest CPI figure for Japan will be published. The forecast is for an annual rate of 0.7% which could be translated that the Abenomics 4 arrows of growth strategy has failed, despite the efforts and faith Japan’s government and central bank have placed in the programme over several years.