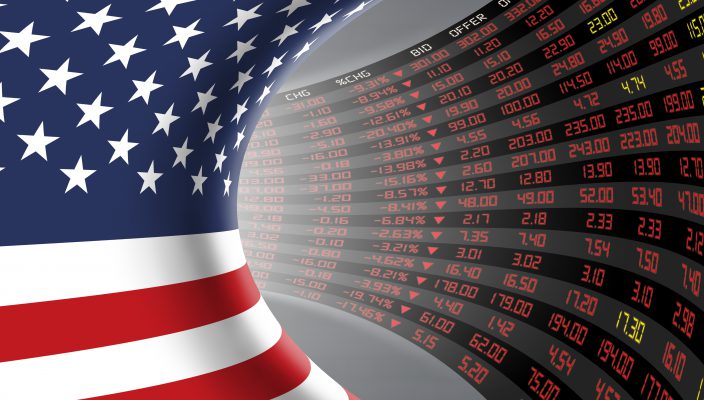 The weak dollar could have been related to many FX traders and investors beginning to concentrate on the FOMC interest rate setting meeting, ending on Wednesday May 1st at 19:00pm U.K. time. The overwhelming forecast is for a hold at 2.5% for the upper bound range and for the Fed chief, Jerome Powell, to continue his and the FOMC’s commitment to a dovish, inconclusive monetary policy, with no target to raise interest rates, over the short to medium term.

USA equity indices rose to record highs during the New York session, at 20:30pm U.K. time the SPX traded up 0.25% and the NASDAQ index up 0.28%. A general risk on tone has been supported by an earnings season holding no shock results. Bullish sentiment events have also supported the risk on mood, such as Über announcing its $90b valuation float, and Spotify declaring it has surpassed the 100 million paying subscriber numbers, despite losing circa €47 million in quarter one 2019. The company, which pays out artists approximately $7.00 per thousand streams, predicts losses will continue to accelerate throughout 2019, amounting to between €180 million and $340 million for the year. The shares were trading close to flat, during the New York session. Tesla rose by circa 2.36% (after plunging to a 52 week low on Friday April 26th) due to its key revenue figure topping $2b for the first time.

Fundamental calendar news, relating to the USA economy published during Monday’s sessions, involved the latest income and expenditure data for USA citizens. Income fell sharply, up by only 0.1% for the month of March, whilst spending also increased by 0.9%, as Americans used their savings to fund their lifestyles; based on the savings ratio falling sharply. The Dallas Fed manufacturing index has slumped dramatically, falling to 2.0, missing the forecast of 10.0 for April. A reading that caused little impact or concern on Monday, despite it being a portent of reduced activity, for an area reliant on manufacturing and production.

European markets experienced mixed fortunes during the day’s sessions; the U.K. FTSE 100 closed up 0.17%, the German DAX up 0.10% and France’s CAC up 0.21%. The euro experienced a positive day versus several peers; at 21:00pm EUR/USD traded up 0.16%, as bullish price action took price through R1, EUR/JPY traded up 0.49%, EUR/CHF traded up 0.45% as bullish sentiment caused price to breach R2, whilst EUR/GBP traded up 0.21%. Sentiment for the euro wasn’t impacted by the consumer sentiment reading for the E.Z. coming in at -7.9, falling to a close on two year low, as several other soft sentiment readings also missed Reuters forecasts.

Sterling experienced gains versus several peers during Monday’s trading sessions, with Bank of England Governor Mark Carney offering some comfort to investors in the U.K. economy, after he delivered a speech in London, covering a wide ranging series of subjects. Most notably, how the central bank intends to manage any potential Brexit fallout, between now and the final October exit deadline. There was little in the way of fundamental data to support a rise in sterling on Monday, other than Carney’s speech.

The U.K. is holding local government elections on Thursday May 2nd, and potentially holding elections for European Parliament members in June. These are the prominent political issues dominating the value of the U.K. pound, whilst the current Tory government continues to manage the chaos and fallout, of its own creation. At 21:20pm U.K. time, GBP/USD traded at 1.293, below the 200 DMA, up 0.16%, above the daily P.P. threatening to breach R1, after whipsawing in a narrow range, above the P.P. during the day’s sessions. GBP also made gains versus: JPY and CHF.

Tuesday is an extremely busy day for the publication of significant economic calendar events, therefore, FX traders would be advised to refer to their economic calendar, in order to stay in front of the data. The high impact events include: German unemployment, Eurozone GDP, Eurozone unemployment, and German CPI. The various data and readings will be published between 8:55am and 13:00pm U.K. time, with all the readings having the ability to impact on the value of EUR and E.U. equity indices, dependent on the results published.

Canada’s latest GDP growth figures, both monthly and annually, will be published on Tuesday afternoon, at 13:30pm. Reuters forecast 0.00% growth in February, with annual growth falling to 1.4% YoY, from 1.7%. These predictions, if met, could take FX traders (who prefer to trade events or the CAD exclusively) off guard and impact on the value of CAD, if analysts and institutional level traders have failed to factor in the projected falls. Mid afternoon, at 15:00pm U.K. time, the latest conference board consumer confidence reading for the USA will be published, the forecast is for a figure of 126.4 in April, rising from 124.1.

Late evening at 23:45pm U.K. time on Tuesday, a slew of data releases relating to the New Zealand and Australian economy will be published. A manufacturing PMI for Australia will be published, as will be an AiG manufacturing index. For the N.Z. economy, the latest employment, unemployment, wages and hours worked data will be revealed. The cumulative effect of this series of data, during a time when liquidity is low, could cause volatility to increase in both AUD and NZD, dependent on the metrics published. FX traders who prefer to trade both Australasian currencies, should remain alert to this raft of releases.

« Trading noise in the FX markets can lead to devastating losses, however, the methods to avoid such damage are obvious, but often ignored. French and Spanish GDP figures provide hope for E.Z. economic improvement, China’s Caixin PMI misses forecast. »