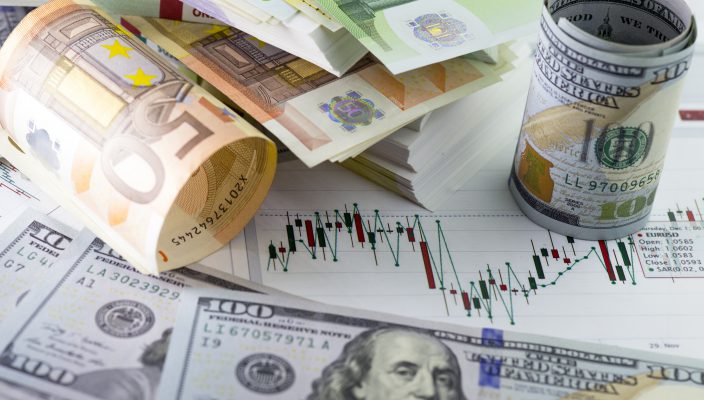 Volatility and liquidity were lower in the FX markets during Monday’s trading sessions, as the U.K. and USA enjoyed one day public holidays and no high impact calendar events were published. President Trump also took the weekend off from his usual activity, of threatening various countries’ economies via social media. Instead, he concentrated his efforts on presenting trophies at a sumo wrestling event, during his diplomatic visit to Japan.

Despite the global reach of the forex market, in all its guises, London and New York still accounts for the majority of trading, therefore, if these venues are effectively closed, then trading volume slumps, which can lead to unusual movements in the retail FX market, generally illustrated by: poor fills, slippage and spikes.

At 21:00pm on Monday May 27th the dollar index, DXY, traded at 97.74 up 0.15%. USD/JPY traded up 0.22% at 109.53, oscillating in a tight range between the daily pivot point and the first level of resistance, R1. USD/CHF made significant gains in the European session, the bullish price action caused price to breach R2, before the major pair gave up a proportion of the gains, to trade close to R1, up 0.23%.

GBP/USD traded down during the afternoon session, after registering marginal gains in the morning session. At 21:15pm U.K. time, the major pair often referred to as “cable” traded at 1.268, down -0.25%, as price neared the first level of support. Sterling had experienced a brief relief rally as a consequence of the European election results and Theresa May’s resignation. However, the forex markets have eventually developed the intel and collective wisdom to realise that any replacement Tory party leader and de facto prime minister, is most likely to pursue a hard Brexit agenda. Sterling subsequently fell versus the majority of its peers, after rising in the morning session.

The euro slipped versus the U.S. dollar during Monday’s sessions, owing more to dollar strength than euro weakness, EUR/USD traded down -0.10%, still close to the 22 month low, printed during the previous week’s trading. EUR/GBP traded up 0.13%, up 2.29% monthly, whilst EUR/CHF traded up 0.10%. The main Eurozone equity market indices closed the day up, the market consensus was relief, as close on 70% of parties that’ll constitute the new European Parliament are pro Europe, whilst the extreme right wing failed to make inroads into the vote share. Germany’s DAX closed up 0.50% and France’s CAC up 0.37%. Gold traded close to flat and near to the 1,290 per ounce round number, whilst WTI traded up 1.04% at $59.24 per barrel. At 21:30pm on Monday futures markets for USA equity indices were indicating a flat open for the New York session, on Tuesday afternoon.

As trading is fully restored on Tuesday morning, the economic calendar events for Europe begins with Swiss GDP growth, which Reuters forecast will fall to 1.0% from 1.4%, a reading that could impact on the value of CHF. Thereafter, Germany’s import export prices and the Swiss import and export data, will be published. Germany’s GfK and the Eurozone’s latest consumer confidence readings will be released, Reuters forecast both readings will remain unchanged, from the previous month’s figures.

The Kiwi dollar is likely to come under increased attention and speculation in the late evening-early morning Sydney session, as the New Zealand central bank the RBNZ publishes its financial stability report, a report that’ll be explained by way of a press conference. The Governor of the C.B. and his entourage will then attend a parliamentary hearing, to justify their decision making and the content in the report. The latest business confidence and outlook activity for New Zealand will also be published during the early part of the Asian session.

« Euro holds firm as populist parties fail to make gains in European elections. How can you stop yourself closing your winning FX trades too early, or too late? »