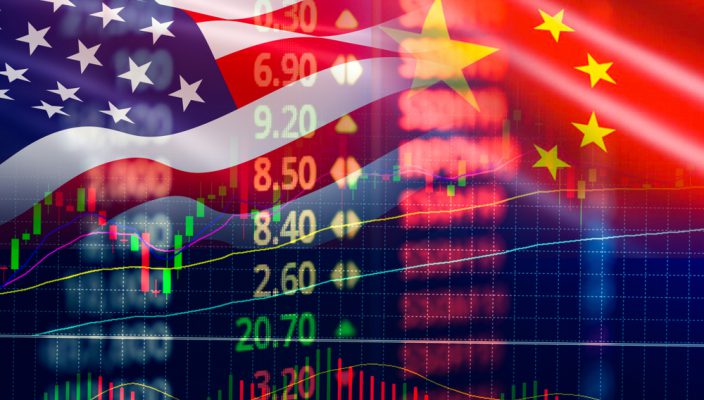 China’s equity market indices, continued the recent sell off, after President Trump issued a statement at a political rally in American during the evening. He stated that China broke off negotiations and effectively broke the conditions of the agreement, which had been brokered over recent months. He reiterated the threat issued earlier in the week; the implementation of 25% tariffs on $200b of Chinese imports into the USA, beginning Friday April 10th.

The leading CSI index closed down -1.85% and the Shanghai Composite closed down -1.45%, both indices have slumped dramatically over recent sessions, since the Trump administration’s threats were first issued; the Shanghai is now up circa 14.3% year to date in 2019, falling from a circa 30% gain in late April. At 8:15am U.K. time, USD/CNY traded up 0.50% at 6.842, whilst the Hong Kong, Hang Seng index also sold off, as did both main Japanese indices; Nikkei and Topix, with the Nikkei closing down -0.93%.

USA equity market futures prices were indicating a negative open for New York, once the bell chimes on Wall Street; SPX down -0.70% and NASDAQ down -0.91%. At 8:30am U.K. time, USD/JPY traded down -0.35%, falling below the 110.00 handle to fall to a six week low of 109.63, as the bearish price action saw price punch through the second level of support, S2. The kiwi dollar continued its recent sell off, accelerated after the RBNZ central bank lowered the key interest rate from 1.75% to a new record low of 1.50%. At 8:40am NZD/USD traded close to flat, in a narrow range, hovering near to the daily pivot point and the six month low, recorded during Wednesday’s trading sessions.

The Aussie dollar also experienced a sell off during the Sydney-Asian sessions, a slide that continued in the early stages of the London FX session, as analysts and traders downgraded AUD due to the Australian close economic ties with China, particularly in terms of its position as an export market. At 8:50am AUD/USD traded down -0.25%, at 0.697, trading on the first level of support, reaching lows over recent sessions not witnessed since January 1st 2019.

Sterling trading experienced a lull during the recent Easter parliament recess. The E.U. providing a reprieve for the U.K. exit up until October 31st 2019, also took the spotlight off the currency and the intense speculation which surrounded major GBP pairs, such as GBP/USD. Volatility has increased over recent sessions, as the Brexit trades are back in play. The Tory government is creaking; the local election results were disastrous, the euro elections (which the Tory party of government were desperate to avoid) are now inevitable, the Tory party supporters want the prime minister to resign and the overall polling readings of the Tories and the p.m. are plunging to lows not broadcast in years.

As a consequence, cable (GBP/USD) is under pressure, falling from recent highs of 1.320 as the Brexit pressure relented, to threaten to fall below the 1.300 handle at 9:00am U.K. time on Thursday during the London-European session. Trading close to the daily pivot point, down -0.04%, below the 100 DMA, the major currency pair is trading circa 40 pips above the 200 DMA. The overall mood with regards to the U.K. economy wasn’t helped by the latest RICS house price survey, published in the early hours of Thursday morning. The metric came in below forecast at -23%, indicating that a significant amount of house price surveyors are witnessing falls in house prices, as opposed to rises.

The economic calendar mainly centres on the USA this afternoon. The Fed chair, Jerome Powell, will deliver a speech in the USA on Thursday afternoon at 13:30pm, the event is listed as high impact, based on the position Mr. Powell holds. Various PPI readings will also be published, whilst focus will also turn to the latest trade balance deficit for the USA; the forecast is for a figure of -$51.1 for March, rising from -$49.4 in February. Such a figure will enhance the continual doubts; that any measures the USA administration have put in place to address the various deficits, are working. The USA BLS will also publish the latest weekly and continuous jobless claims, weekly claims are forecast to fall to 220k from 230k.

Late evening on Thursday, yen will come under scrutiny as the latest consumer spending and earnings figures will be published by the Japanese authorities. Reuters are forecasting a fall which could have an impact on JPY pairs, coming after a period when Japan’s markets have been shut, due the the ascension of a new emperor.

« The high impact releases that tend to have a higher impact on FX markets. The latest U.K. GDP growth figures and the USA CPI data could have a significant impact on the values of GBP and USD, when the figures are published on Friday May 9th. »