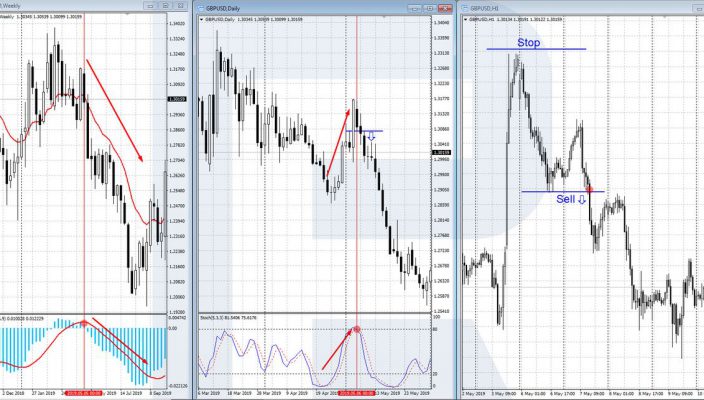 Dr. Alexander Elder developed the method in 1985, and it was initially published in Futures Magazine in 1986.

What is the Triple Screen trading system?

There isn’t a single signal that can be called “perfect.” He went on to say that an indicator couldn’t operate in all timeframes and conditions.

Dr. Elder’s points can be explained in a variety of ways.

For example, when the market is heading upwards, trend indicators such as Moving Averages provide buy signals.

On the other hand, momentum oscillators, such as the Stochastics, show an overbought state, indicating a sell signal. When the market is in decline, the opposite is true.

As a result, Dr. Elder created a trading method that combines the best trend and momentum indicators with the removal of basic averaging concerns.

How did the system get its name?

The name “Triple Screen” comes from the medical field. Since he was engaged with medical sciences, Dr. Elder named this Triple system Screen after the Triple Marker Screen Test.

Some individuals get the terms Triple Screen, and Three Screen mixed up. This is because the system uses three tests using trend and momentum indicators on every trade.

For example, on the 5-minute chart, an indicator may provide buy signals, whereas, on the daily chart, it can show sell signals.

A trader can solve this problem by dividing timeframes into five parts. There are 5 to 6 trading hours in day trading, for example. Each hour may be divided into five portions by a trader. Trend indicators would no longer generate contradictory indications in this manner.

How to use the Triple Screen trading system?

Trading with the trend is the best method to use the Triple Screen strategy. The system separates the trend’s period into three parts:

A trader would search for long-term patterns using trend indicators (by dividing timeframe into five segments). The indicators would then be applied to the intermediate timeframe.

These indicators would thus provide a trader with precise entry and exit positions, free of misleading signals.

Moving Averages and the MACD Histogram are the greatest trend indicators for the Triple trading technique.

Momentum oscillators can be used in range markets in the same way.

Dr. Elder created the Triple Screen trading system, which is a complex strategy. This strategy can be used in two ways: trading with the trend or trading against the trend.