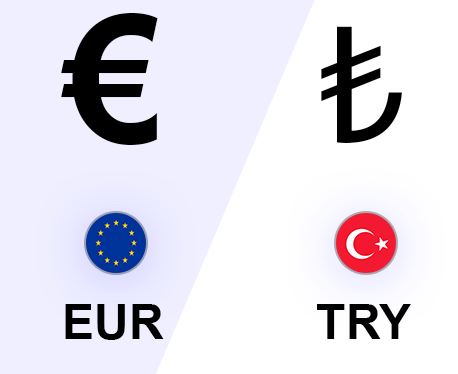 In forex trading, it is important to understand currency pairs. Currency pairs consist of various types, including majors, minors, and exotics. Due to their lack of liquidity, exotic currency pairs differ from significant pairs.

Despite this, some exotic currencies have unique price actions and strategies that make them worth trading. Currency from exotic locations is also called an alternative currency or a currency from a third-world country.

The potential for higher returns than other currencies makes them an attractive option for forex traders, but they also carry significant risks. This article describes three virtual exotic currencies available for trading in the foreign exchange market and what makes them attractive to traders.

EUR/TRY is the first exotic currency pair we will analyze. The European Union has 19 members who use the Euro as their single currency. In this pair, it serves as the base currency.

The EUR/TRY rate is 6.5821, which means it takes 6.5821 Turkish Lira to buy 1 Euro. Regarding trade volume, the Euro ranks second to the US dollar. Inflation, manufacturing data, consumer demand, and the geopolitical crisis all affect the Euro. The European Central Bank’s (ECB) monetary policy, inflation, and manufacturing are also influential factors.

The Turkish Lira is used in the Turkish Republic of Northern Cyprus and the Republic of Turkey (TRY). After undergoing economic reforms in 2005, the TRY became one of the world’s least valuable currencies.

The country devalued by more than 40% against the US Dollar in 2018 due to an extensive debt crisis and current account deficit. In the world, the Turkish economy is growing at a rapid pace. Agricultural goods and vehicles are their main exports.

In pre-crisis times, traders attracted this pair because of its high volatility. The Eurozone’s monetary solid policies have since kept prices stable, leading to a decline in this statistic.

During the early years of Rand’s existence, the currency’s value was closely related to gold prices, one of South Africa’s most significant exports. The financial crisis of 2008 cost it nearly half its value against the Dollar.

There is still a relationship between the Rand and gold prices. Gold and platinum mining and agriculture are significant revenue streams for them. However, the weather and political concerns continue to affect both sectors.

The South African banking sector and manufacturing sector are thriving. 10% of its exports come from the automotive industry. A 30% unemployment rate in the country should be of concern to traders, as it is among the highest in the world.

AUD/MXN is the third exotic currency pair. In addition to being a commodity currency, the Australian Dollar is also very volatile. Australia exports a wide variety of goods, including iron ore, beef, oil, gold, and other precious metals.

AUD prices are affected by seasonal changes in these goods as well. This pair frequently trades in carrying trades due to the high-interest rate differential between the two currencies.

Nominal GDP-wise, Mexico’s economy ranks 15th globally. The economy is heavily reliant on exports. Over 90% of the world’s trade is supported by free-trade agreements, including those between the EU, Japan, Israel, Canada, and the US.

Trade-related events and reports influence MXN’s price direction. As a result, tariff wars, supply chain disruptions, and NAFTA developments are all on the rise. To make their decisions, FX traders consider these factors carefully.

Exotic currencies are not a good place to start if you are relatively new to currency trading. They are less liquid than majors and minors, and their spreads are also higher. Trading currency pairs from the major and minor groups are an excellent way to begin your journey as a forex trader, as these pairs are more active and have lower spreads. While exotic pairs can be riskier for more experienced traders, they can be profitable if you know what you’re doing.

« Definition of “Cable” in Forex Trading Forex Hedging- What is it? »