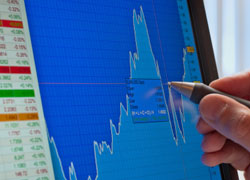 The Impact of Leading and Lagging Indicators on Your Forex Trading

Indicators, as part of a trader’s overall technical analysis, help to identify: momentum, trends, volatility and other aspects of a forex security’s behaviour empowering traders to make more considered and therefore many more profitable long or short (buy or sell) decisions. Whilst some traders use a single indicator, solely for buy and or sell signals, they are best used in conjunction with price movement, chart patterns, and other indicators.

The perceived wisdom is that traders are best using a combination of leading and lagging indicators as part of their overall strategy and most technical traders would agree with this assertion, however, it’s worth analysing the relative benefits of each set of indicators to arrive at that conclusion.

Discussions as to the relative and diverse merits of leading and lagging indicators can often prove to be contentious within the FX community, the most obvious question is why bother with lagging indicators, why not just use leading? If one set illustrates where price is headed and the other tells you where price has been then surely it’s a ‘no brainer’?

Many traders would contend that all patterns and indicators are derived from price and since price itself is lagging, all the indicators (both leading and lagging) which are ultimately based on price are behind the curve and therefore also lagging, so why not simply develop skills as a ‘price actionista’? Committed swing traders would alternatively suggest that they’ve often waited a day and been a day ‘late’ in entry and still captured the majority of the trend’s move using lagging indicators.

Another reasonable question is how can you differentiate between leading and lagging indicators, given the apparent random nature of markets leads to an expression of price? Therefore how can any indicator, or combination series of indicators, predict with any degree of certainty were price is headed? Another opinion often challenged is that lagging indicators actually demonstrate price action and leading indicators can’t.

One key aspect of whether to favour leading or lagging indicators could be based on whether the trader is a swing or trend trader, or a scalper or intraday trader. Trend traders would arguably be better utilising lagging indicators (momentum indicators) displaying changes and continuation in trend, scalpers or day traders could possibly achieve better results by choosing leading (oscillating) indicators.

Leading Indicators
Examples of leading indicators would include the following;

An excellent example of an oscillator is the RSI, which varies between zero and 100. A security is traditionally regarded as overbought when the RSI is above 70 and oversold when below 30. Oscillators indicators are leading indicators, oscillators are easily identifiable as those drawn within boundaries of two lines. The oscillator signals buy or sell based on the set levels of the range. The stochastic oscillator is another excellent example, it generates two bands, if one of these bands is broken (crossed) you have a potential sign of an overbought, or an oversold currency market.

A Leading indicator is the graphical representation of a mathematical expression that predicts the future value of a random variable by taking all the information contained until the last period of time. Forex trading platforms such as Currenex and Meta Trader have many leading indicators. The main concept behind indicators is that “the present is as the past, in probabilistic terms”, meaning that the probability of an increase of the price above a determined value is the same today as it was yesterday.

A lagging indicator is one that follows price movements and as a consequence has less predictive qualities. The most well-known and used lagging indicators are the moving averages and Bollinger bands, this would include the MACD which is, by definition, a series of moving averages. The benefits of these indicators lessens during non-trending periods, however, they can prove to be extremely useful during trending periods.

This is due to the fact that lagging indicators tend to give clearer signals during trends and as such produce fewer buy-and-sell signals. This should in theory assist the trader to capture more of the trend instead of being forced out of their position based on the volatile nature of the previously mentioned leading indicators.

A Lagging indicator is the graphical representation of a mathematical expression that generates signs of a new currency price tendency according to information received in the past. A “Lag” is a statistical feature in time series meaning that past values of a random variable (currency pairs) contain lagged information that determines the actual value of that variable. The most commonly used lagging indicator is a “Moving Average” which is a simple mathematical average of the last K prices (determined by the trader according to his preferences). The main concept behind lagging indicators is to use information received in the past, in order to show a new trend in price that has developed.

Undoubtedly the best technical trader indicator based strategies involve a combination of leading and lagging indicators. A combination of the two, looking for confirmation across the full spectrum of both the two defined sets, can prove to be incredibly valuable particularly when, for example, the currency security is in a period of consolidation, generally considered to be the period of time when many traders can give back a proportion of their hard fought gains.

The choice of which to use depends on trading style and preferences, for swing traders it’s more appropriate to use lagging indicators to determine trends, it may also be worth contemplating using leading indicators to enter as close to the beginning of the trend as possible. Whilst we accept as traders that losses are as inevitable as whipsaws and fake price movements, isolating the two sets of indicators, and narrowing down their benefits to a particular trading style, should result in the probability of your trade selection being increasingly profitable.

« Debts By A Thousand Cuts The Light Bulb Moment, Or Will The Last Person Left in Europe Please Switch The Lights Off »