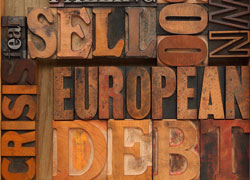 Debts By A Thousand Cuts

Greece’s government voting in the austerity bill came as no surprise. The government is now a safe bet to get their next tranche of pocket money (circa €8 billion) courtesy of the troika which should ensure they can firstly fill up the cash machines this weekend, not that anyone has any wages or savings to go shopping.

Secondly allow the one or two wealthy individuals who’ve been in a coma for the past two years and haven’t already transferred all their cash into Swiss francs, to quietly escape.

Thirdly the govt. can pay the civil servants not on strike (such as the riot police) who are getting a couple of decent work outs during the two day strike plus overtime bonus, I wonder if they asked to be paid in Yen or Swissys? How Greece manages to pay bond rates that kneecap-breaking, door-banging gangster money lenders would be embarrassed to charge (150% on the two year bonds) remains be seen, but at least Greece has breathing space, for a day or two..

So now the vote is ‘slam-dunked’ the focus will now quickly switch back to the upcoming EU meeting. Papandreou now heroically flies to Brussels for a meeting with other European leaders on Sunday to try and prevent the debt crisis spinning further out of control. A second summit is also expected to be held on Wednesday.

We are at a critical point, not only for us but for European history. I have never, in my memory, heard before from leaders of major European countries that there is danger of Europe coming apart.

The USA enjoyed some positive news in the form of economic data releases on Thursday. Factory activity in the Mid-Atlantic region rebounded in October whilst the number of Americans claiming new jobless benefits fell last week. Initial claims for state unemployment benefits fell 6,000 to 403,000 the Labor Department said. A four-week average, which smoothes out the weekly volatility, reached its lowest level since April. Separately, the Philadelphia Federal Reserve Bank’s business activity index rebounded to 8.7 in October, the highest reading in six months, from minus 17.5 in September.

However, it wasn’t all good news Stateside, an unofficial gauge of human misery rose last month to a 28-year high as Americans struggled with rising inflation and high unemployment. The misery index, which is the sum of the country’s inflation and unemployment rates, rose to 13.0 pushed up by higher price data the government reported on Wednesday. Consumer prices rose 3.9 percent in the 12 months through September, the fastest pace in three years. The last time the misery index was at current levels was in 1983. This year, the index has risen more than 2 points.

The ranks of the poor rose in almost all U.S. states and cities in 2010, despite the end of the longest and deepest economic downturn since the Great Depression the year before, U.S. Census data released on Thursday revealed. Mississippi and New Mexico had the highest poverty rates, with more than one out of every five people in each state living in poverty.

Poverty was acute in Washington, D.C., where one in 10 people had incomes less than 50 percent the threshold. The Texas region defined by the cities of McAllen, Edinburg and Mission had the highest poverty rate in the country – 33.4 percent, followed by the Fresno, California, area at 26.8 percent.

Markets
U.S. stocks ended the day with modest gains on Thursday, alternating back and forth due to rumours of developments in Europe where leaders are constantly seeking to reassure investors that a solution to the debt crisis will arrive at the weekend Eurozone summit. The SPX closed up 0.46%.

The slight up tick in sentiment in the USA came too late to influence the secular bearish mood that enveloped European markets in both sessions. The STOXX closed down 2.50%, the FTSE down 1.21%, the CAC closed down 2.34%, the banking sector doubts and threats of downgrades not helped by the rift appearing in the Franco German view on how the stability fund should be structured. The DAX closed down 2.49% and the MIB closed down 3.78%. The FTSE equity index future is up 0.5%.

Currencies
The Swiss franc could once again regain it’s safe haven status, it rallied versus all of its major counterparts on demand for a refuge as Europe’s leaders struggle to achieve a resolution of the region’s sovereign debt crisis. The franc rose 0.9 percent to 1.2317 per euro at 5 p.m. New York time. The Swiss currency rose 1 percent to 89.38 centimes per dollar. The euro rose 0.2 percent to $1.3780 after earlier falling by 0.8 percent. The U.S. currency was little changed at 76.80 yen after rising 0.4 percent. One month volatility on the euro versus the dollar rose to 15.8 percent, the highest level since Oct. 7, when Fitch Ratings downgraded Spain and Italy. Implied volatility for the currencies of the Group of Seven nations increased to 13.3 percent, also the highest since Oct. 7, according to a JPMorgan index.

Canada’s dollar strengthened against its U.S. counterpart on apparent optimism that European leaders will be able to solve the region’s debt crisis by the second scheduled meeting next week. The loonie (Canada’s currency) rose 0.6 percent to C$1.0144 per U.S. dollar at 2:37 p.m. in Toronto, after falling as much as 0.4 percent. One Canadian dollar buys 98.58 U.S. cents. The loonie has weakened 1.7 percent over the past month, according to the Bloomberg Correlation-Weighted Currency Indexes, a gauge of 10 developed-nation currencies. The greenback (US dollar) has gained 0.5 percent.

Economic data releases that could affect the morning London and European sessions.