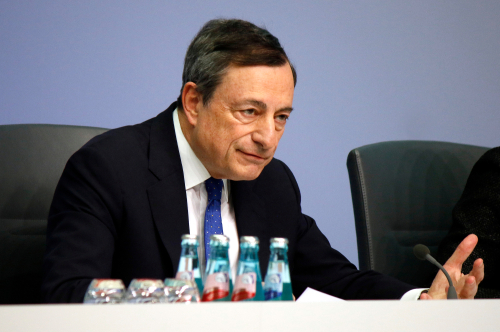 The ECB rate setting announcement is forecast to reveal the rate maintained at 0.00%, but it’s Mario Draghi’s press conference where focus will be concentrated

Mar 6 • Forex Trading Articles, Market Commentaries • 772 Views • Comments Off on The ECB rate setting announcement is forecast to reveal the rate maintained at 0.00%, but it’s Mario Draghi’s press conference where focus will be concentrated

At 12:45pm U.K. time, on Thursday March 7th, the Eurozone central bank, the ECB, will announce its latest interest rate decision. The widely held consensus is for the current key rate to be maintained at 0.00%, where it’s remained since July 2016, with the deposit rate held at -0.40%.

After holding the rate steady in January, the ECB stated that it expects the key interest rates to remain at their record low levels, at least through to the summer of 2019. The central bank finally brought to an end its €2.6 trillion bond purchase scheme in December 2018, but the ECB will keep reinvesting the cash from maturing bonds, for an extended period of time.

The latest ECB decision on Thursday, will come after the latest E.Z. GDP growth figures will be broadcast at 10:00am U.K. time. Reuters are forecasting growth for Q4 of 2018, to come in at 0.20%, no change from the Q3 figure, with annual growth set to come in at 1.2%. As to whether or not the ECB has prior knowledge of this sensitive GDP information, before their decision making meeting takes place, is impossible to know. If the ECB did have sighting of the data, then undeniably it could alter their monetary policy stance.

Whilst the rate setting decision has the capacity to move markets in the euro, the press conference, traditionally held forty five minutes later, by the president of the ECB, Mario Draghi, is where FX analysts and traders quickly switch their attention and focus. During these conferences, the ECB reveals its latest monetary policy statement and delivers forward guidance, in relation to how they intend to use their monetary policy powers, to steer the E.Z. economy forward. If Mr. Draghi delivers what’s termed a “dovish” statement, for example; suggesting that any interest rate rises will be indefinitely postponed, then the value of the euro could come under pressure.

During the month of February, EUR/USD traded in a wide range, oscillating between bearish and bullish sentiment, partly related to falling USD sentiment, rather than increasing euro confidence. The major pair, at 11:45am U.K. time on Wednesday March 6th, was trading close to flat, at 1.130. The pair is trading down -0.57% weekly, -0.32% monthly and -8.93% yearly.

When taking into consideration: the GDP data being broadcast, the ECB interest rate decision being released and the press conference held by Mario Draghi in Frankfurt at 13:30pm U.K. time, it’s highly likely that the euro will experience intense focus and thereby increasing speculation, as these three high impact calendar events take place. Therefore, FX traders who hold euro positions, or those considering trading these news events, need to diarise the timings, whilst ensuring they’re prepared for all outcomes.