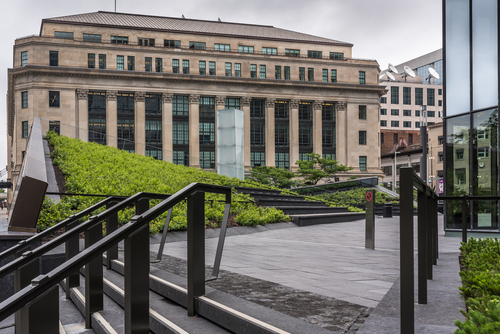 As widely expected, the BOC, Canada’s central bank, announced on Wednesday afternoon, that they’d held the key interest rate at 1.75%. Maintaining their highest rate since 2008. The BOC stated there was “increased uncertainty” around future rate hikes, as it held the interest rates steady, diverting from the previous strategy; to engage in rate rises throughout 2019. The value of the Canadian dollar immediately slumped, as analysts and FX traders digested the BOC monetary policy statement.

The value of CAD was also hit by fundamentals which missed targets; Canada’s trade balance deteriorated to -$4.59b for December, whilst labor productivity fell to -0.4% for Q4 2018, from 0.2% growth in Q3. The Ivey PMI fell to 50.1, just above the contraction-expansion level. At 19:45am U.K. time, USD/CAD traded up 0.61%, breaching the third level of resistance, R3. At 1.342, price reached a two month high, a level not seen since January 5th. CAD’s fall was replicated versus its other peers, for example; EUR/CAD also breached R3, shortly after the BOC statement was broadcast. EUR/CAD broke up through the 200 DMA, reaching a six week high, indicating just how far sentiment has fallen for the Canadian dollar, on the basis that the euro has performed badly versus its peers, over recent months.

Whilst the deterioration of the Canadian trade balance deficit and missing the forecast, may have added to the negativity surrounding CAD, the news regarding the USA trade deficit stunned investors. The latest monthly deficit for the USA came in at -$59.8, missing the forecast of -$57.9, rising from -$50.7 in November. The December figure took the annual trade balance deficit for goods, to a stunning -$891.2. Making a mockery of the Trump administration’s efforts, to reduce the trade balance deficit, by applying tariffs. The deficit is the largest in the nation’s 243 year history and the trade gap with China also hit a record of $419 billion.

Despite illustrating why Trump is obsessed over reducing the deficit with China, the figures also reveal how impotent the initial China tariff measures, set during 2018 have been. There’s a certain irony that the best method by which the USA could shrink the deficit, is by inducing a recession. In 2009, during the heights of the Great Recession, the trade deficit fell by 40% from the peak three years earlier, to circa $506 billion.

The latest ADP private jobs numbers for the USA also missed forecast, registering a rise of 183k in February, versus the 300k jobs created in January. This figure could have been impacted by the government shutdown in January, causing employers to temporarily pause recruitment. As the fundamental economic releases were absorbed by the FX market, at 21:00 pm U.K. time, the dollar index, the DXY, was trading close to flat on the day at 96.86. USD/JPY traded at 111.75, down -0.12%, close to S1, after oscillating in a narrow range during the day’s sessions. USD/CHF also traded in a narrow range, close to parity. At 1.004, close to the daily pivot point, the major pair was up 0.07%. USA market indices closed down on the day; SPX down -0.54% and the NASDAQ down -0.93%.

Sterling traded in tight ranges versus its peers, with the exception of its value versus AUD and CAD; the Aussie was impacted by falling GDP numbers and CAD by the BOC dovish monetary policy statement. At 21:15am GBP/USD traded at 1.317, up 0.03%, close to the daily pivot point, down 1.06% weekly. Once again, the U.K. pound has proved to be remarkably resilient, despite the lack of progress on last minute Brexit talks with the E.U. on Wednesday. A hard, no deal Brexit now looks the most likely outcome. However, it must be noted that FX markets are rarely predictive, they’re always reactive. Therefore, if high impact Brexit news breaks, sterling traders need to be in a position to react.

EUR/USD oscillated in a narrow range during Wednesday’s sessions, mainly below the daily pivot point, with a bias to the downside. At 21:20pm the major pair traded at 1.130, close to flat on the day. Focus will turn to the value of the euro during Thursday’s sessions, as several high impact calendar events and releases will be published. The latest GDP growth figures for Q4 2018 will be delivered at 10:00am U.K. time; the Reuters expectation is for 0.2% growth, identical to Q3, with year on year growth to be maintained at 1.20%. Any significant miss, or indeed beating of this GDP prediction, could cause movement in EUR versus its main peers.

Then at 12:45pm, the ECB, the Eurozone central bank, will reveal its latest rates setting decision. The bank is widely expected to maintain the rate at 0.00%, with the deposit rate at -0.40%. It’s the monetary policy guidance delivered 45 minutes later in a press conference, which analysts and FX traders will concentrate on, as this is where and when the value of the euro is likely to whipsaw. Particularly if (as some analysts expect), Mario Draghi the president of the ECB, announces that the bank stands ready and willing, to participate in more asset purchasing, in order to stimulate the economy and force E.Z. inflation up.

« The ECB rate setting announcement is forecast to reveal the rate maintained at 0.00%, but it’s Mario Draghi’s press conference where focus will be concentrated Aussie dollar fails to launch as Australia publishes a record trade surplus. FX traders turn focus to Eurozone GDP and the ECB monetary policy, forward guidance »