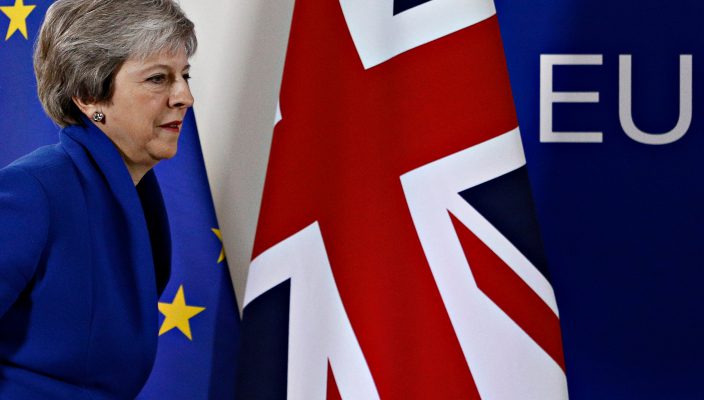 Sterling whipsaws in a wide range versus peers, as a new Brexit deal is offered by prime minister May to Parliament, U.S. equity indices rise as trade war fears recede.

May 22 • Forex Trading Articles, Morning Roll Call • 1643 Views • Comments Off on Sterling whipsaws in a wide range versus peers, as a new Brexit deal is offered by prime minister May to Parliament, U.S. equity indices rise as trade war fears recede.

The U.K. prime minister delivered a speech, offering up a new withdrawal agreement (WA) to Parliament, on Tuesday. A speech in which she promised various improvements, to get the deal through the House of Commons by way of a vote, in the first week on June. The most surprising element of the revised offer, involved the opportunity to have a second referendum on the WA, if her deal was voted through. As a unequal mixture of blackmail, cloaked with a withered olive branch, her gamble failed spectacularly. No sooner had her dramatic speech, heavily laden with false passion, fallen flat on its face and the majority of her Tory MPs turned against her. Nearly all MPs (from all parties) condemned her desperate opportunism and reckless last roll of the dice, before she retires in ignominy in July.

For FX analysts and traders, the behaviour of sterling during the afternoon session, was proof once again (if needed) that events drive our markets and how the FX markets are reactive and not predictive. GBP/USD displayed text book, whipsawing price action, in an extremely wide range, during the afternoon trading session. In the early hours of the London-European trading session, price had slumped through S2, to print a daily low of 1.268. Price remained in a bearish price action pattern, until Mrs. May delivered her speech.

As news broke regarding her second referendum offer, FX market participants immediately bid up the value of sterling, believing that remaining in the E.U. was now a possibility. GBP/USD violently reversed trend and breached R3, rising by 0.70%, to print a daily high of 1.281, within a five minute time scale, after her offer was broadcast. However, as MPs reaction to the offer quickly fell flat, GBP/USD gave up the day’s gains to reverse direction and by 20:40pm U.K. time on Tuesday, the major pair traded at 1.270, close to S1 and down -0.20% on the day. Naturally, this breaking news event dominated the U.K. economic/political news landscape.

However, there were several negative news stories indicating the perilous state of the U.K. economy, in the lead up to Brexit, which helped determine the direction of sterling before May’s speech. The recently rebranded British Steel, the assets of which (without the pension liabilities) were bought by a hedge fund from TATA with U.K. government funding, required a £120m lifeline from the U.K. government last week and on Tuesday the owners demanded another £30m. If the payment wasn’t forthcoming on Tuesday evening, it threatened to close the plants, with a total loss of circa 25,000 jobs. A restaurant chain, fronted by the celebrity cook Jamie Oliver, went bust on Tuesday, with the loss of circa 1,500 jobs and £90m of debts. And the CBI sales/orders trend survey posted a dismal -10 print for May, versus the Reuters prediction of -5, the lowest reading printed since the Great Recession era.

Tuesday was a relatively quiet day for economic calendar news events from the USA, existing home sales data was published; the reading missed the forecast of a rise of 2.7%, coming in at -0.4% month on month for April. The U.S. dollar posted gains versus the majority of its peers during Tuesday’s trading sessions, whilst U.S. equity market indices closed up on the day. The risk on mood was encouraged due to a lack of rhetoric being broadcast, in relation to the trade war, the USA has sought with China. Huawei launched its latest and most advanced Honor 20 series of smartphones on Tuesday; arguably as good as the latest iPhone, but less then half the price. Obviously, being placed on an banned list yesterday by Trump, was not a coincidence of timing.

Wednesday is a busy day for economic calendar events and data releases, which FX traders should remain vigilant to. At 8:30am U.K. time, Mario Draghi, the President of the ECB, delivers a speech in Frankfurt, the content of which could vary widely, based on the various threats and pressures the E.Z. region is currently experiencing. Thereafter, at 9:30am, the latest series of U.K. inflation data is published. The expectation, based on Reuters forecast, is for a rise in the U.K. key annual CPI reading to 2.2% for April, from 1.9% in March. April’s CPI is forecast at 0.7% for the single month, significantly above the normal monthly range of 0.00-0.02%, registered for the U.K. over recent years. Sterling could react to the readings if the predictions are met, if analysts and FX traders deduce the BoE are more likely to raise the base interest rate from 0.75%, earlier than previously anticipated. Various government borrowing figures for the U.K. will also be published by the ONS, a sharp rise in borrowing is expected.

Later evening, at 19:00pm U.K. time, the minutes from the latest, May 1st, FOMC monetary policy and rate setting meeting, will be published. An event which can move the value of USD, if the narrative in the document contains any surprises, such as; any forward guidance indicating a reversal in monetary policy, from dovish to hawkish.