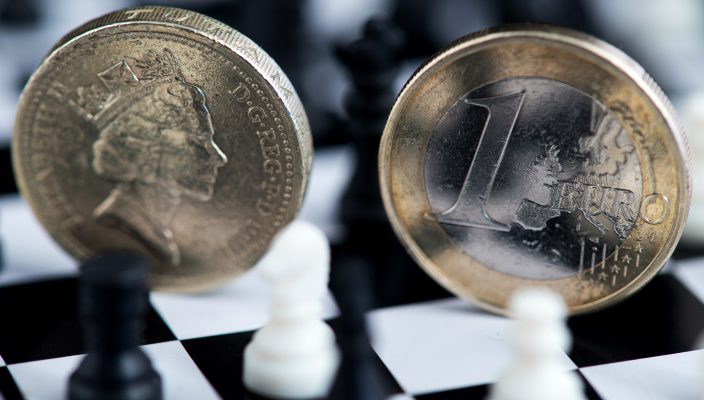 GBP/USD traded in a tight range, near to the daily pivot point, during Monday’s trading sessions, as FX analysts and traders attempted to price in both the latest Brexit issues and Tory government chaos. At 20:30pm U.K. time GBP/USD traded at 1.272, up 0.05% on the day. Trading down -1.89% monthly, the major pair often referred to as “cable”, traded close to a four month low.

With markets pricing in an 11% possibility of a U.K. base interest rate rise of 0.25% before 2019 ends, FX traders are looking towards two main political issues; Brexit and the inevitable Tory party leadership/prime ministerial battle, as reasons for sterling to fall or rise versus its peers, over the coming months. Cable’s fall was capped due to USD falling versus the majority of its peers during Monday’s sessions, however, when measured against its other peers, GBP registered losses during the day’s sessions.

The U.K. FTSE 100 closed down -0.53% as global trade jitters once again resurfaced, courtesy of the Trump administration. These concerns extended to Eurozone indices with Germany’s DAX closing down -1.61% and France’s CAC down -1.43%. The USA NASDAQ index closed down -1.35%, after the tech heavy index was spooked as a consequence of Trump placing Chinese smartphone manufacturer Huawei on a banned list for American firms to do business with, ensuring that Google’s Android system will eventually have to cut its support and features.

Whilst Trump cites fears over security as the reason for the ban, the suspicion remains that USA commerce fear that Huawei is gaining market share rapidly and a combination of its phones and Samsung’s, could lead to a dramatic drop in Apple’s: sales, market share and share price. Both Google (Alphabet) and Apple traded down circa -2% during the New York session.

The dollar index, DXY, traded down -0.06% at 21:15pm U.K. time, at 97.94 the index is close to the 98.00 handle and up 0.67% weekly, versus its baskets of peer currencies. USD lost ground versus the majority of its peers during Monday’s sessions; EUR/USD traded in a narrow daily range, oscillating close to the daily pivot point, up 0.10% on the day at 1.116, increased German producer prices in April added to confidence that the economic situation of both Germany and the wider E.Z. is improving.

USD/CHF traded down -0.20% on Monday evening, trading below the first level of support, S1. Swiss franc strength returned to the FX market, as a consequence of both safe haven appeal and increased weekly sight deposits being recorded at Swiss banks. The Aussie dollar, after registering significant gains versus its peers during the Sydney-Asian session, gave back some gains in the later sessions. The relief rally, due to the general election in Australia returning a consistency of government, faded during the London-European and New York sessions; at 21:45pm AUD/USD traded up 0.58%, having been up as much as 1.00% during the Asian session, as price breached the third level of resistance, R3.

WTI oil remained above the 63.00 a barrel handle, up 0.69% on the day, as USA tensions with Iran and Venezuela continued to cause supply concerns. Gold, XAU/USD, traded in a tight range on Monday, below the daily P.P. at $1,277 per ounce. Its safe haven appeal has reduced over recent sessions, as the trade war and tariff rhetoric, has temporarily fallen off the financial mainstream media’s reporting agenda.

Tuesday’s economic calendar events of significance for Europe, includes an appearance by several members of the Bank of England’s MPC, monetary policy committee, who will discuss many issues and threats surrounding the U.K. economy. GBP could come under intense scrutiny during this gathering, which begins at 9:30am in London. A U.K. trade body, the CBI, reports its latest sales trends metrics for May, expected to remain unchanged from April’s figures.

Eurozone data concerns the consumer confidence reading for May, forecast to come in at -7.7, which would represent a marginal improvement from the -7.9 level recorded for April. The OECD will publish its latest report on economic conditions pertaining to the E.Z. The cumulative effect of both events, could cause increased speculation in the euro, which has registered significant gains versus the majority of its peers during May, with the exception of a fall versus USD. The New York session data releases mainly concerns the latest home sales data; existing home sales are forecast to rise to 2.7% for April, rising from the -4.9% registered in March.