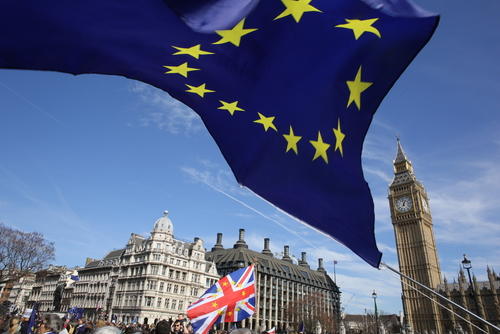 The U.K. pound began to fall versus its peers, during Monday’s early trading sessions, as FX market participants began to wake up to the fact that the U.K. is now only nine working days away from needing to find an exit solution, or crash out. However, markets were taken by surprise, as the leader of the house, John Bercow, a Tory MP, ruled shortly after 15:30pm that the Tories and the prime minister cannot bring the same withdrawal agreement back to Parliament, to be voted on as the meaningful vote (MV), for a third time.

Referred to as MV3, this preventative action by the speaker, has ruined Mrs. May’s strategy, of wearing MPs down and blackmailing them to accept her plan, or face a chaotic exit. With the European Council due to vote on the U.K. A50 extension later this week, on Thursday, the government has got itself into a complete mess with regards to its timing and tactics. The impact on the value of GBP/USD was negligible, at 20:00pm U.K. time the major pair was trading down -0.28% at 1.325, having plunged to a daily low of 1.318 and S2, shortly after the announcement was made.

Other sterling pairs followed similar patterns. Whilst EUR/GBP traded close to R1, after earlier in the day threatening to breach R2, at 20:00pm the cross pair traded up 0.45%, at 0.855. As always; FX markets are reactive, not predictive. Therefore, FX traders need to remain hyper vigilant to all breaking Brexit news, over the coming days, as the legal exit date of March 29th approaches.

In a relatively quiet day for medium to high impact calendar news, Eurozone and European markets experienced mixed fortunes. The news that the two heavyweight German banks; Commerzbank and Deutsche could merge, weighed heavily on the DAX index, which closed down -0.25%. France’s CAC closed up 0.14%, whilst the U.K. FTSE 100 closed up 0.98%, breaching the 200 DMA. The leading U.K. index has made gains of 8.50% year to date in 2019 and at 7,299 it’s the highest close for approximately six months, since the start of October 2018.

EUR/USD has made a significant recovery since printing multi month lows earlier in March, which saw price fall through the critical 1.120 handle. At 20:20pm on Monday, the major and most traded FX pair, was priced at 1.134, up 0.15%, after oscillating in a wide range, with a bullish bias, during the day’s trading sessions. The euro racked up gains versus the majority of its peers, during Monday’s sessions.

After an initial fall, shortly after the opening Wall Street bell, which could have been related to profit taking, USA market equity indices rose during the latter stages of the New York trading session. At 20:30pm the SPX traded up 0.37%, remaining above 2,800 at 2,835, a level not witnessed since October 11th 2018. The tech heavy NASDAQ index also rose, by 0.34%, breaching the critical handle of 7,700, also a level not seen since early October 2018, with the Q4 slump and sell off, now fully recovered.

News that Lyft, a rival to Uber would list on the NASDAQ market, raising an initial $2b, whilst valuing the ride hailing app firm at $23b, helped revitalise investor interest on Monday. The news that card and payment processor WorldPay, is being sold for circa $43b to a rival firm, also helped boost market sentiment. Investors view such huge mergers (and IPOs such as Lyft), as indicative of overall bullishness for markets. Investors will also begin to concentrate their focus on Wednesday’s FOMC rate setting announcement and subsequent statement on monetary policy. An event which has historically moved the equity indices markets and the FX markets, relating to USD currency pairs. At 21:00pm on Monday, USD/JPY traded up 0.05%, with USD/CHF down -0.05%.

Tuesday’s significant calendar events include import and export data from Switzerland published at 7:00am U.K. time, releases that could impact on the value of the Swiss franc. At 9:30am the latest: employment, unemployment and wage inflation data for the U.K. economy, will be published. Wages are forecast to fall to 3.2% growth YoY, unemployment is predicted to come in unchanged at 4%, whilst job creation (on a three month basis) up to January, is expected to have fallen to 120k. At 10:00am the latest Zew surveys for the German economy will be released, Reuters expect improvements, month on month, for March.

At 14:00pm a series of data releases relating to the USA economy will be broadcast; capital goods orders, durable orders and factory orders during the month of January, are forecast to reveal an improvement. With the factory orders metric being of particular interest, based on it being a: leading, fundamental, indicator, of the overall health of the USA economy.