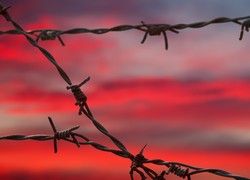 Sanctions Come Somewhere Between A Soldier And A Statement

When asked on US television in the late 1990's if she (Madeline Albright, US Secretary of State) thought that the death of half a million Iraqi children (from sanctions in Iraq) was a price worth paying, Albright replied: "This is a very hard choice, but we think the price is worth it."

If one single phrase could summarise the self-defeating politics of the last fifty years, the term economic sanctions, as a punishment continually waged by the USA, would surely rank high. Economic sanctions are quite simply self-defeating in the Global Age. They haven't 'worked' when visibly practiced versus; Iraq, Cuba, USSR, Serbia or Iran. There is no record of capitulation by a sovereign state since the second World War as a result of America and it's allies in NATO decided to ban its own people from doing business, or from having contact with, a particular country. Sanctions are a product of a shallow thought process and vindictive politics.

American politicians traditionally frame international relations in tactical and simplistic behavioural terms, in skewed epic terms more akin to the production of a “good vs. evil” blockbuster. In contrast, the rest of the world tends to reason with practical national interests, jobs and trade, respectful cooperation and a cordial resolution of differences through a series of negotiations.

Europe is potentially digging an economic hole in relation to the proposed embargo on buying Iranian oil. Whilst Iran potentially loses 18 percent of its oil export business or more (if Europe follows through on it's embargo on July 1st) many of Iran's other big oil customers, Japan and South Korea and China, could be left scrambling to switch suppliers. The intense knock on effect this will cause and the disruption to supplies will be incredibly damaging to an already stretched delivery system. In short an argument could be put forward that this scramble, at a time when the global economic recovery looks at best tenuous, could re-set a deep global recession.

Whilst in theory the EU embargo projects a massive economic blow to a country already suffering from tightening U.S. and European sanctions, Iran's currency plummeting versus the dollar since December is seen by Iran as insignificant given Iran's switch to accepting other currency for oil payment, such as rubles. Saudi Arabia cannot cushion any oil shock by boosting production, therefore if the embargo sticks the price shock could quickly backfire on western governments.

Iran's Oil
The National Iranian Oil Company (NIOC) is a government-owned corporation under the direction of the Ministry of Petroleum of Iran, it's an oil and natural gas producer and distributor headquartered in Tehran. It was established in 1948. NIOC ranks as the world's second largest oil company, after Saudi Arabia's state-owned Aramco. Oil reserves in Iran, according to its government, rank third largest in the world at approximately 150 billion barrels as of 2007, although it ranks second if Canadian reserves of unconventional oil, tar sands, are excluded. This is roughly 10% of the world's total proven petroleum reserves. Iran is the world's fourth largest oil producer and is OPEC's second-largest producer after Saudi Arabia.

In addition to the large reserves, Iran still has huge potential for new significant gas discoveries: areas like Caspian Sea, North East, Central Kavir and especially areas starting from Aghar and Dalan gas fields in Fars province up to the Strait of Hormuz and Central Persian Gulf have considerable amount of undiscovered gas resources. According to Exploration Directorate of NIOC, there are about 150 unexplored anticlines in Iran.

Sanctions Never Work
The stock phrase is that modern day sanctions never work, they're not intended as a punishment for a regime that the majority of world leaders despise. Rather sanctions are designed to impoverish the indigenous population of a nation in order that, (out of desperation) they organise, uprise and rebel versus the powers or regime within their state. After the upheaval, which can take many years driving the country into measurable poverty, corporations then pick up the baton with the newly installed regime on much more favourable terms than those previously in situ.

The powers who organised/indirectly sponsored the uprising get a freshly compliant polished client state with which to do business and the leading risk takers/agitatants, who emerge within the new client state, get rewarded in equal, if not far more favourable terms, than the previous non compliant holders of power.

The 'bonus' is that having crippled the country economically the prized assets and the spoils of the hidden war that sanctions propagate slow down in use and are preserved as future plunder. A metaphorical tap is turned off, a plug is put on top of the country's use of it's own resources until the client state receives it's new orders from an altogether more friendly foe who only wanted the "rule of democracy" to be established..

Modern day historians really struggle to find an example of a sanction punishment programme that has actually worked, the best model commentators and historians can point to is Belarus in 2002. Although scholars argue endlessly over just how ineffective sanctions are, all agree that in some exceptional cases, sanctions have worked. Positive examples are relatively rare (the most optimistic researchers claim no more than a circa 33% percent success rate), the few that have succeeded have done for different reasons, they include the apartheid regime in South Africa and the Communist government in Poland. However, neither country had the natural mineral resources of the value and magnitude of Iraq and Iran.

The sanctions on Iraq were perhaps the most brutal in living memory, it's worth looking back at the impact up to and before 1998 in order to gauge the full impact sanctions can have bearing in mind the E.U. is considering effecting sanction control on Iran for apparent non compliance with nuclear inspectors. Will the proposed sanctions versus Iranian oil imports actually 'work', have sanctions ever worked, do they ever hurt the intended targets, or are those invented targets simply the convenient scapegoats to mask the real agenda?

Sanctions Kill
UNICEF and other United Nations bodies reported that the Iraq sanctions (which the U.S. and U.K., primarily, refused to have lifted), added to the death toll since 1991 and was estimated to be close to 1 million deaths up to 1998 with mass starvations and disease (whilst the regime remained unaffected). Up to half of these were said to have been children, but the 500,000 number has been controversial based on the methods of data collection and estimation. Other estimates suggest 227,000. Either way, the sanctions were criticised for targeting Iraqi people and not Saddam Hussein’s regime.

U.S. officials in fact stated that sanctions would remain even if Iraq complied with United Nations inspectors, giving the Iraqi regime virtually no incentive to comply and heightening suspicions that the sanctions were simply a means to an end. For sanctions to work, there needed to be a promise of relief to counterbalance the suffering; a carrot as well as a stick. Indeed, it was the failure of both the United States and the United Nations to explicitly spell out what was needed in order for sanctions to be lifted that led to Iraq suspending its cooperation with UN inspectors in December 1998, the history from thereon in has been well documented..

The Slight Of Hand – The USA Actually Accounted For More Than The Rest Of The World Combined Illegal Oil Sales By Iraq
Julian Borger and Jamie Wilson, reporting for the British newspaper The Guardian, found that the US was the most corrupt of all countries dealing and benefitting from Iraq prior to the invasion of 2003. Documentary evidence was available that the Bush administration was made aware of illegal oil sales and kickbacks paid to the Saddam Hussein regime but did nothing to stop them.

US oil purchases accounted for 52% of the kickbacks paid to the regime in return for sales of cheap oil, more than the rest of the world put together. On occasion, the United States actually facilitated the illicit oil sales. The US Treasury apparently played delaying and avoiding tactics to repeated requests by staff from the UN and the US state department for information on transactions of US oil companies. The US military allowed some oil to be smuggled out, even assuring a US oil company that the oil they had illegally purchased would not be confiscated.

Sanctions Are Not A Price Worth Paying
At times it defies belief what a short memory the global community has, less than a decade after a duplicitous and miscalculated crusades into Iraq and Afghanistan which have left the countries shambolic, with Libya now showing the scars, deep divisions and growing pains of a region in turmoil, it's beyond belief that the pressure is being cranked up using exactly the same rhetoric as used versus Iraq.

Most economists and market commentators regard the price of oil as a thermometer to global economic health. For every dollar rise of oil estimates suggest up to $500 bl of USA GDP is lost, this at a time when any global recovery could easily be knocked of its fragile gyroscopic course. The effect of rising oil prices has also had a devastating affect on emerging nations, witness the turmoil in Nigeria as the government feels compelled to remove subsidies.

The cost of basic raw materials ballooning, since the economic crisis post the 2008 event horizon, caused a massive spike in global commodity prices (principally through speculation) that the poorest on the globe have been burdened with disproportionately.

Well known broadcaster and respected journalist John Pilger commented in 2000 on the devastation the Iraq embargo and sanctions had wielded over a ten year period, neither Iran, the global economy, or if they're truthful the USA, can afford to repeat this protracted pattern of abject failure again. Both in monetary and human cost the price is simply not a price worth paying…

The change in 10 years is unparalleled. In 1989, the literacy rate was 95%; and 93% of the population had free access to modern health facilities. Parents were fined for failing to send their children to school. The phenomenon of street children or children begging was unheard of. Iraq had reached a stage where the basic indicators we use to measure the overall well-being of human beings, including children, were some of the best in the world. Now it is among the bottom 20%. In 10 years, child mortality has gone from one of the lowest in the world, to the highest.