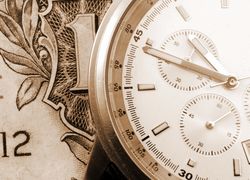 Jesse Livermore was a famous (arguably infamous) speculator and market operator. He is famed for firstly making and losing several multi-million dollar fortunes and secondly for his aggressive short selling during the stock market crashes of 1907 and 1929. His legendary short selling expertise earned him the title “The Boy Plunger”..

Inadvertently he provided many profound ‘one liners’ during his colourful career; “you never know ’til you bet!” is one quote that’s often at the forefront of my ‘trading mind’ when I pull the trigger and enter the trade.

“After spending many years in Wall Street and after making and losing millions of dollars I want to tell you this; It never was my thinking that made the big money for me, it was my sitting” is another quote relevant for swing and position traders as it illustrates the need to continually exercise patience and more importantly how to avoid a potential account killer for fledgling traders; over-trading.

The first Livermore quote illustrates that the trading industry (at the retail level) is still a probability based ‘competition’. We accept we have no control over what price will do once we pull the trigger; “among the hazards of speculation the happening of the unexpected – I might even say of the unexpectable – ranks high”.

Based on previous chart patterns, (illustrating how human behaviour is moving the market, both now and in the past), we can make a determined and weighted prediction on what price will probably do next, but we are always at the mercy of the market; “the game does not change and neither does human nature”.

There’s another pearl of wisdom that has particular relevance to this article as it relates to money management, risk and mindset; “a loss never bothers me after I take it. I forget it overnight. But being wrong – not taking the loss – that is what does damage to the pocketbook and to the soul.”

It’s fascinating to note that up to a century before the advent of technology (allowing us to set a stop at the click of a mouse) Jesse was advocating the use of stop losses for all his trades. He recognised that he wasn’t right or wrong, being on the right or wrong side of price is the real issue and having the mindset to cut your loss (once the trade’s expectancy has reached exhaustion) was as crucial then as it is now.

Once a trade is entered the trader has in effect written out an investment cheque, a commitment that may prove to be a good investment, a bad one or an irrelevance (break even). There is no right or wrong in the conventional sense as we have no control over what price will do, if we stick to our trading rules no self admonishment is necessary.

If price doesn’t move in the predicted direction, the trade is quite simply one that didn’t work out. “If I hadn’t made money some of the time I might have acquired market wisdom quicker.”

Far too many fledgling traders obsess over ‘Holy Grail’ searching, believing there’s a mathematically perfect alignment of indicators, pattern recognition, or price action strategy ‘out there’ that once discovered will open a window to riches. However, in comparison to the other key issues of Money-management and Mindset, Method actually ranks a distant third in terms of importance to trading success.

That’s not to suggest that method is not crucial, it is, any edge and overall strategy relies on a prompt to enter a trade and a reason to exit, either at a loss or with profit, but without the underpinning of sound money management and having your trading psyche (mindset) ‘fixed’ no method can consistently work in isolation. Alexander Elder and Van K Tharp, both celebrated strategists, trading psychologists, authors and mentors, refer to these 3 key critical success factors as “the 3Ms”.

I could confidently demonstrate in excess of 30 well proven indicator based trading techniques that would profitably and consistently ‘work’ for traders, illustrating price accelerating away from the mean thereby indicating a change in market sentiment. Some techniques would suit certain trader personalities, others would be completely unsuitable which is why a trader must embarks on a voyage of self discovery in order to uncover what ‘works’ on a personal level. However, no technique or method will make you profitable without the discipline to execute the trade and having the self discipline to prevent violation of your rules.

Let’s focus on a series of five trades; one trade could be break even, there may be two winners and two losers, if just one of the winners reaches an ideal ROI of 2:1 and the other winner returns 1:1 we’ll be pip positive in our series of trades. Use this series of trades as an example of how focusing on risk highlights how crucial sound MM is, even performance with a fifty percent ‘win’ rate can still reap rewards.

Using a practical example let’s suggest a relatively new or fledgling trader has £20,000 savings, but sensibly decides to only invest (speculate) £5,000 as their first foray into the markets. They’d risk £100 per trade if not exceeding the 2% rule. They may not realise it but that’s actually their first unconscious step into sound money management; the trader has placed a stop loss on their overall initial risk as they commit to a disaster draw down of 25%.

These first ‘risk decisions’ are without doubt the most crucial in determining their future success. And let’s remember that in the financial crunch and crash of 2008 (and the fall out for two years thereafter) many extinguished hedge funds would have been satisfied with only a 25% loss.

If the trader were to gradually witness this first investment reduce, (over an extended period of 12 months+), but be absolutely convinced that their trading was developing in the right manner; the account bleed had stopped, they had turned the corner and could see a pattern of profitability emerging, then justifying further risk of their savings would be a straight forward business decision. Although even at the extreme of losing 25% of their savings a judgement could be made that the first instalment was simply the price of their education.

If that priceless and personal education was acquired through thousands of hours of screen time, hundreds of questions and emails on trading forums or live environments whilst gaining a ‘university of trading education’, then that £5K has surely been a worthwhile investment.

There is no substitute for ‘doing’ in this business, and if that doing has been underpinned by sound MM, leading finally to the construction of a sound personal trading psyche, then the trading edge will be ready to be completed by one of many indicator strategies, pattern recognition, or (if on lower time frames) perhaps by developing a very keen price action technique.

If a FX swing trader regularly trades 3 currency pairs then a series of circa 150+ consecutive losses would have to occur in order to wipe the account out, a situation which would be close on impossible to replicate even if selecting completely random trades. If the win/loss ratio was around one trade won to every two lost, then circa 300+ losers would be required to wipe the account out. I’d expect a swing trader to be taking circa two trades per pair per week, or at the extreme perhaps ten trades across three pairs.

Therefore it could take nearly 18 months before an account is wiped out if the losers exceed the wins by a 2:1 ratio. However, during this time you’d expect a dedicated trader to be constantly analysing their overall performance to improve all aspects of the 3Ms, therefore this extreme loss is unlikely.

An equal distribution of wins and losses can result in profitability if the MM is sound and if your pip wins are greater than you losses perhaps by 2:1. So we can clearly see that sound MM is key to account longevity and later will determine your profitability. But here’s another issue; when you know how much you’re risking on each trade, and you suspect you are developing a positive expectancy to your edge, then you’re exercising superb trader discipline which eliminates chaos and indecision.

This directly impacts on the other critical success factor of trading, your mindset. Once you’ve established a tolerance for acceptable risk and you begin to see positive results, you’re entering a trading zone where you can begin to feel more confident as your trading ‘smarts’ evolve.

Discipline, focus, overcoming fear, adapting, reacting, high levels of concentration, a professional outlook and approach to your business, being positive with regards to your positive expectancy, adapting your lifestyle to your business, identifying the key times of the day and the days of the week that price is likely to move..all these elements help create your unique trader DNA.

Being a disciplined trader and having respect for the market as you develop ‘trader self-respect’, is vital to enjoy success in this industry. Practising market respect, (only risking a maximum 2% per trade), is essential to developing that discipline. Only taking the trade based on your rules and never ever violating those rules throughout any given trade is critical. This is not ‘method’ in operation it’s mindset and money management and the distinct disciplines are often confused.

It is impossible to repeatedly exercise a winning method without a sound mindset and equally robust MM. As sole operators we only have ourselves to rely on, we must be highly disciplined in order to be effective, instilling correct MM creates inherent discipline leading to a more confident, less chaotic rule based trading edge. This correlation of critical success factors will undoubtedly help you build the secure foundations necessary for long term success.