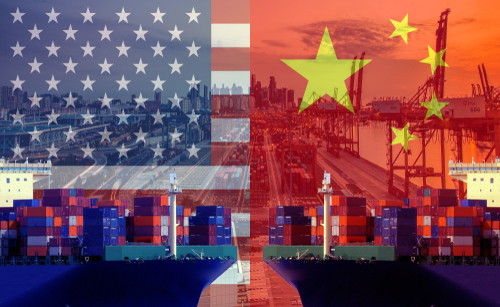 Resolutions to the issues of Brexit and the China-USA trade wars were anticipated this week, but investors’ hopes may be left hanging

Feb 25 • Forex Trading Articles, Market Commentaries, Morning Roll Call • 1029 Views • Comments Off on Resolutions to the issues of Brexit and the China-USA trade wars were anticipated this week, but investors’ hopes may be left hanging

Several global political issues, which are having a demonstrable impact on the global economy, could reach their nadirs, during the trading week beginning Sunday February 24th. Namely; Brexit and the China-USA trade/tariff talks. Friday March 1st is the date the Trump administration has previously set as its tariff deadline. Unless an agreement is reached by Friday, then 25% tariffs on up to $200b of Chinese imports yearly, are set to be implemented on March 2nd. Trump hopes such a tax, of $50b a year, will help redress the huge balance of trade deficit the USA runs with China, which is put variously between $300-$350b per year. The detail emerging from the two detentes, one held in Beijing, one currently being held in Washington, are so far scant.

The financial mainstream media have survived on scraps of information to date, which have suggested that the various, daily, meetings are progressing well. On Friday February 22nd, Bloomberg reported that the Chinese had agreed to buy an extra $1.2 trillion of American goods per year, in order to redress the trade balance. Quite what the Chinese would want and need on their shopping list of American goods, in order to redress the deficit, remains a mystery. The fact remains that the only method which the USA can use to address the deficit, in an economy 80% dependent on imports and the retail and service sectors of the lob sided economy, is by making USA imports cheaper.

The U.S. can only achieve cheaper Chinese imports by increasing the interest rate beyond its current 2.5% level, to perhaps the 3.5% level, which Jerome Powell indicated as policy for his “normalisation” programme, back in 2018. A more valuable dollar versus China’s yuan, will help reduce the Chinese deficit. But this is where Trump has a problem; if the FOMC raise rates to 3.5%, then the equity market rises in 2018, partially scrubbed off in December 2018, might completely disappear. Rendering his $1.5 trillion tax cut potentially impotent.

Perhaps a light is going on in the Oval Office that simply turning over the game board, because you don’t like the rules, or can’t quite cope with the complexity of the strategy, doesn’t work as a major economic policy. The delicate strings of international, economic diplomacy, have to be played like an instrument, not brutally hacked at. Both USA equity markets and the greenback will come under close scrutiny during the week, as the saga no doubt rumbles on. The dollar index, DXY, is down -0.40% weekly and up 0.40% monthly. USA equity markets have made a blistering start to 2019, the best in over 38 years, according to some metrics; SPX up 11.4% year to date and the NASDAQ is up 13.4% in 2019.

Many analysts think an extension will be granted by Trump, on the basis that he’ll conduct a summit with President Li of China later in March, allowing Trump to save face after his ultimatum threats. The value of oil and gold will also be under focus this week, oil will be carefully monitored based on an encouragement that previous levels of global trade will return, ergo demand will increase. Whereas, gold may continue its recent bullish streak, based on its traditional safe haven appeal.

The word and concept of “extension” will also be used extensively during the week, in relation to the ongoing Brexit impasse. Having failed to get the withdrawal agreement passed in January, prime minister May has failed to come up with a plan B. She’s now petrified to put her plan A back in front of the House of Commons, after it was defeated by a record number in January. Since which time she’s spent weeks shuttling between London and Brussels, achieving nothing, during her extra negotiations with the E.U.

On Sunday Mrs May announced that the next vote will now take place on March 12th, giving MPs just over two weeks to then find an exit solution that satisfies all parliamentarians. Therefore, accusations that she’s running down the clock in an attempt to blackmail MPs with her threat of no deal Brexit, will once again resurface on Monday. Reports also emerged on Sunday, that during a visit to Egypt to talk to E.U. leaders, the possibility to extend the leave date for 21 months, was also discussed. How she’d sell such a possibility to her party, who would regard it as a permanent suspension, whilst thwarting the “will of the people”, would be fascinating to witness.

The U.K. Parliament might now take control of the situation, by voting through an extension for article 50, based on the fact that the U.K. is unprepared to exit on March 29th. However, the U.K. House of Commons and its MPs can vote for an extension, but the E.U. are under no obligation to agree to extend the exit beyond March 29th. The U.K. is now five weeks away from B Day, Brexit day, therefore U.K. equity markets and the U.K. pound will come under intense scrutiny as the March 29th deadline ticks down.

Sterling traders will have noted the whipsaws which occurred during the trading week ending Friday 22nd, as various MPs resigned from their respective parties, and May jetted off for various unspecified meetings with the E.U. negotiators. These wide trading ranges, containing spikes and whipsaws, made day trading currency pairs such as GBP/USD tricky, whilst also throwing up opportunities for the skilful and experienced. The major pair has gravitated close to the 1.300 handle, where the 200 DMA is also closely aligned.