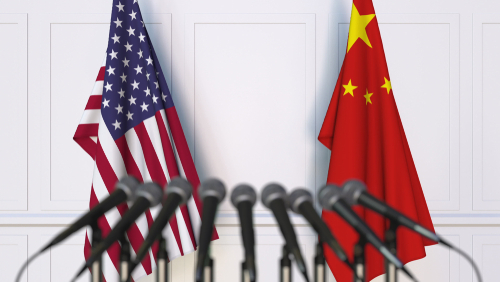 China’s currency, the yuan, rose in the Asian session trading, as both the USA and Chinese negotiators announced that the trade and tariff discussions which took place in Beijing last week, would now continue in Washington. Investors and FX strategists took this as a positive sign that President Trump may also become involved, in order to avoid the the March 1st deadline. From March 2nd tariffs of 25% on up to $200b of Chinese imports, are scheduled to be implemented, unless a trade agreement is reached.

Surprisingly, despite the continued opinion generated by the mass mainstream media reporting the talks have actually progressed, there’s been zero detail or information leaked, regarding what’s actually been achieved, or is close to being agreed. At 8:30am U.K. time USD/CNY traded close to flat at 6.773, after recovering from a session low of 6.760, close to the first level of support, S1. Chinese equity markets made significant gains in the Asian trading session, the CSI traded up 3.21%, now up 14.45% year to date in 2019. China’s banks granted a record number of new loans in January, official data showed last week, Chinese policymakers have tried to boost growth, as inflation data began to suggest that domestic, deflationary forces, might be gathering on the horizon.

Optimism regarding the overall health of Asian trade, was briefly dented by the latest Japanese machine orders data, which is often regarded as a leading fundamental indicator, as to the ongoing, internal strength of the Japanese economy. If manufacturers and factories are tooling up, its bullish for: exports, employment and the overall strength of the globe’s second (or third) largest manufacturer. Year on year up to January, orders came in at 0.9%, missing the forecast of 3.4% YoY growth. Yen slipped versus several peers, by 8:45am USD/JPY traded close to R1, at 110.6 the major currency pair was up 0.10% early in the London session. Yen’s fall was replicated versus the euro and sterling, GBP/JPY and EUR/JPY both traded close to the first level of resistance. The NIKKEI closed up 1.82%, up 6.33% YTD.

Both Brent and WTI oil rose on the commodities markets in the Asian session and the early part of the London trading session, global trade optimism is pricing in increased energy demand. WTI traded above the $56 a barrel handle, reaching a three month high. Despite the surge to date in 2019, price is still significantly under the circa $78 per barrel level printed in October 2018 and when viewed on the daily time frame, price is some distance from the 200 DMA, sited at 62.80. The unintended consequence of the rise in oil is an eventual rise in inflation, therefore, the cost of living will increase for consumers, if the oil price rises for any sustained period. European markets failed to experience any momentum built up by Asian markets, the U.K. FTSE 100 traded down 0.25% at 10:00am, Germany’s DAX traded down 0.21% and France’s CAC down 0.05%.

The only calendar event of note concerning the U.K. came from the online house sales agent Rightmove, who revealed that (according to their data) asking prices were up 0.7% in Feb, up 0.2% year on year. The MoM rise prevented headlines of a negative annual reading being broadcast. The political saga and drama regarding Brexit will rumble on over the coming days. Mrs May, the U.K. prime minister, is scheduled to fly to Brussels, in an attempt to reopen the withdrawal agreement, which the E.U. (once again) explained over the weekend, will not be reopened for renegotiation.