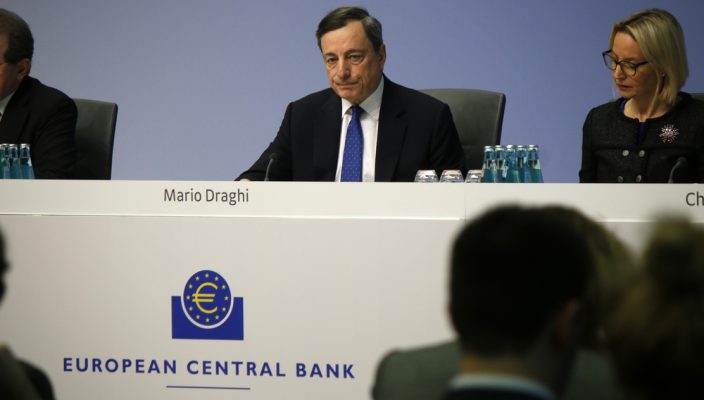 May 21 • Uncategorized • 2410 Views • Comments Off on Mario Draghi’s speech, the latest U.K. CPI readings and the FOMC meeting minutes, are high impact events likely to move the value of EUR, GBP and USD.

At 8:30am U.K. time, on Wednesday May 22nd, Mario Draghi, the President of the ECB, will deliver a speech in Frankfurt. The event is listed as high impact on the economic calendar due to the range of issues Mr. Draghi could cover in his address. Subjects such as: Eurozone GDP growth, inflation, monetary policy stimulus and a target to begin raising the key interest rate above its current zero level, are likely to be covered. The current global growth, impacted by tariffs implemented by the USA, a tariff policy which has been extended to the E.Z. is also a major topic of discussion amongst central bankers lately. During his speech the euro will come under increased scrutiny.

At 9:30am U.K. time, a series of data relating to U.K. inflation and government borrowing, will be published by the U.K. statistics agency, the ONS. FX analysts and traders will quickly focus on the key, headline CPI reading, which Reuters forecast a rise to 2.2% up to April annually, from 1.9% with the monthly rate for April rising by a significant 0.7% amount in a single month. Such readings could impact on the value of the U.K. pound, as FX market participants may deduce that the Bank of England’s MPC is more likely to raise the base interest rate, above its current 0.75% level, before 2019 is closed.

The recently weak U.K. pound is responsible for such sudden rises in CPI and with PPI input prices forecast to rise up to 4.4% annually when the data is released, inflation appears to be on course to continue to rise, unless the BoE takes remedial action by raising rates. A difficult action to take and problem to solve, as the U.K. faces a no deal Brexit on October 31st. The ONS also reveals the latest borrowing figures for the U.K. government; net borrowing is forecast to reveal a considerable rise in April.

At 19:00pm U.K. time on Wednesday evening, the minutes from the most recent FOMC policy meeting will be published. FX analysts will quickly scour the content to establish if the committee were unanimous in their decision making, regarding the interest rate to remain unchanged at 2.5% and their commitment to maintain their current monetary policy. A policy which could best be described as “neutral”; neither hawkish or dovish, based on the previous communiques and the Fed chair Jerome Powell’s recent statements. The release of the minutes are a closely watched event and the detail contained in the minutes have the power to move the markets in USD, especially if the content delivers forward guidance, suggesting a change in monetary policy tone.