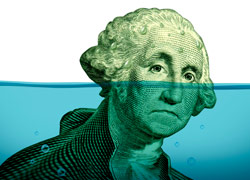 No problem readers, I’ll cover the $1.09, so it’s not all bad. Although using the USA methods of compound interest if I don’t pay it soon they might stiff me with a bill for a million or two, so perhaps a ‘whip round’ is in order.

Is it a joking matter? Well perhaps not, but as the USA becomes a financial parody of itself you have to see the sense of humour in the situation. On Tuesday the S&P closed up 1.55% propelled by stronger USA (and global) manufacturing data. Brent crude and WTI oil rose by over 4% and the ‘oil’ news was heralded as good news for the USA and Global economy, this despite the fact that many economists suggest that the U.S. loses $100 billion of GDP for every dollar rise in price. So today, as WTI rose by $4.75 a barrel, the USA ‘lost’ $475 billion of GDP and as the revised debt ceiling was breached, the USA reaching the 100% debt v GDP level, there wasn’t a murmur in the mainstream press. Financial heavyweight publishers such as Bloomberg and Reuters neglected to mention the milestone.

European stock markets closed at their highest levels for five months. Better than expected economic data out of the US and China helped set the tone. There were other significant data releases on Tuesday.

Market Overview
Stocks surged in the USA and Europe, the Dow Jones Industrial Average closed at its highest level since July whilst commodities rallied on signs of increasing Global manufacturing output. The dollar weakened and U.S. Treasuries fell.

The U.S. Dollar Index appreciated 13 percent from a record low in March 2008 through the end of 2011 even as the Fed kept interest rates at about zero and printed cash to buy $2.3 trillion of Treasury and mortgage-related bonds, and is little changed since 1991. The International Monetary Fund said Dec. 30 that the dollar’s share of global foreign-exchange reserves rose in the third quarter by the most since 2008.

The dollar weakened 0.9 percent on Tuesday to $1.3051 per euro, which appreciated 0.6 percent versus the yen after falling to an 11-year low yesterday. The yen weakened versus 13 of its 16 most-traded peers monitored by Bloomberg, the New Zealand dollar strengthened versus all but two of its major counterparts.

Futures traders increased net bets that the greenback will rise against the currencies of Japan, the euro zone, Australia, Switzerland, Canada, Britain, Mexico and New Zealand to 158,719 contracts last week, compared with a record high 166,591 reached in November.

Analysts polled by Bloomberg predicted a median forecast of 48.3 for Eurozone PMI, the same figure as the previous release. A Bloomberg survey predicts a rate of +2.80% year-on-year for CPI, from last month’s +3.00%.