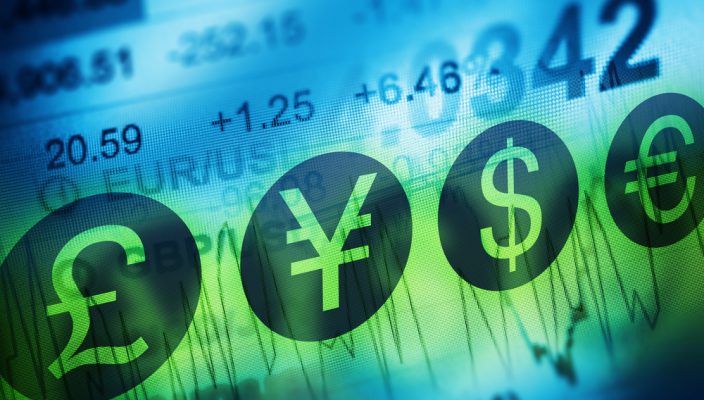 The price-action opportunities for day traders who specialise in trading the major pairs singularly were scarce during Monday’s trading sessions as the majors traded mostly in tight, sideways ranges during the day’s sessions. At 20:00pm U.K. time EUR/USD traded down -0.08%, USD/CHF up 0.02%, AUD/USD down -0.09% and USD/JPY up 0.16%. Monday was an extremely quiet day for economic calendar events and data releases and this lack of economic was undoubtedly reflected in the lack of price-action movement across the board. The dollar index traded up 0.14% at 97.28.

Sterling was the leading currency to experience movement outside of tight ranges versus its peers, as developing U.K. political news caused the currency to fluctuate and whipsaw against several of its peers. News that the chancellor of the exchequer, Philip Hammond, would resign on Wednesday before being unceremoniously sacked by the likely new prime minister Boris Johnson, added to the insecurity and doubts regarding the U.K. pound. On Monday morning another minister resigned before being pushed. As he voiced his incredulity regarding Johnson becoming P.M. he attempted to arrange a vote of no confidence in the new prime minister to be held on Wednesday, before he’ll have been in the job for less than 24hrs. Johnson is odds on to be revealed as the U.K. prime minster at 11:00am on Tuesday after voting closed on Tuesday evening, sterling may react as the result is broadcast.

The arithmetic propping up the Tory party as a government is now also looking decidedly insecure, with a potential M.P. resigning due to being hit with criminal charges and the loss of a seat due to an upcoming by-election their majority could be cut down to one even with the support of the Irish DUP Party. GBP/USD is the currency pair most sensitive to U.K. political issues, after oscillating in a tight bearish daily range at 20:20pm the pair traded down -0.16% at 1.248. EUR/GBP traded up 0.25% as price threatened to breach the 0.900 handle.

The major U.S. equity index, the DJIA, closed out the day close to flat as the rush to invest in blue chip major U.S. stocks as a defensive play is beginning to look tired. The SPX traded up 0.21% as the NASDAQ traded up 0.79% due to tech index earnings coming in ahead of forecasts. At 20:50pm U.K. time WTI oil traded up 0.79% at $56.17, the tensions in the Strait of Hormuz, as a consequence of the U.K. operated tanker being recently seized by Iranian authorities, impacted on the price of oil globally. As tensions cooled during the day WTI gave up a significant proportion of the gains which were registered earlier in the day.

Tuesday’s economic calendar news begins with the latest CBI (confederation of British industry) data published at 11.00am U.K. time. Reuters forecast that the trends orders reading for July will remain at -15 with the business index metric coming in at -20 falling from -13 in June. Such record low numbers, from an organisation at the coal-face of U.K. business will bring into question recent ONS data which suggested retail sales and GDP had improved significantly during the month of June. The latest July consumer confidence reading for the Eurozone is predicted to remain unchanged month on month at -7.2.

Housing data constitutes the major economic calendar news printed for the USA on Tuesday. May’s house price index is forecast to show a rise of 0.3%, with existing home sales expected to show a decline to -0.1% for June after rising by 2.5% in May. Late evening on Tuesday focus will turn to New Zealand as the latest imports, exports and trade balance data is published. The trade balance for June is forecast to slump to $100m in June from $264m in May. Such a slump could impact on the confidence in the kiwi dollar which experienced a rise during Monday’s trading sessions, at 21:22pm NZD/USD traded up 0.10% and NZD/JPY up 0.20%.

« In a quiet day for economic calendar news focus will turn to GBP as the Tories complete their leadership vote ballot Sterling faces scrutiny as new U.K. prime minister is announced yen falls as BOJ hints at further easing »