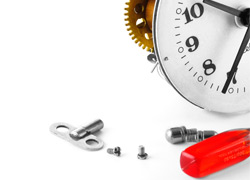 Whilst a stopped clock is right twice a day that’s a luxury we never experience when forex trading. There are many personal events that shape your evolution as a forex trader and there’ll be many intense moments that can induce a form of shock therapy indirectly leading to a steep acceleration of your learning curve.

Witnessing other traders ‘dissolve’ is never a pleasant experience. Witnessing several traders terminally damage their trading careers, by holding onto a trade or series of trades due to their conviction and directional bias, can be an incredibly enlightening experience. Being a voyeur of a ‘trading car wreck’ can be used as an epiphany moment given the over-riding feeling is one of relief; thankfully it isn’t you who’s buried yourself in such a situation, or doesn’t know how to exit.

The mechanism of exiting a trade ‘gone bad’ should never be an issue for traders, but holding onto a losing trade (when all indications are that it’s gone bad) is a ‘fire walking’ test that many fledgling traders have to endure to overcome. Sadly there’s only one way to learn why you have to underscore, irrespective of whether or not your directional bias is eventually proven ‘right’, each and very trade with the effective use of stops, be those mental or physically input on your platform.

Earlier this year my curiosity was peaked by a claim made on a trading forum by a trader claiming to have found the “Holy Grail” of trading and he intended to prove it by trading the euro (eur/usd) exclusively. Plenty of other fledgling traders immediately attacked the claims and ridiculed the trader, fortunately many other seasoned and experienced traders didn’t shout this trader’s claims down, they weren’t being cruel in actively encouraging him, they simply took a brutal, cold and emotionally detached stance. One or two of us did private message each other suggesting that we needed to stock up on popcorn as this type of free entertainment didn’t occur too often, but overall the live discouragement and invective was counter-balanced by the challenge of proof.

The trader never discussed his strategy over and above ‘using candles’, or his overall edge/methodology. My trading antennae were twitching immediately given he proposed to never use stops, not even disaster stops a complete anathema to a trader bordering on the obsessive with regards to disciplined money management. He intended to close any individual trade by using his intuition and fundamental ‘beliefs’ that the euro was due a huge correction. To be fair I’ve known (still do) day traders and scalpers who trade without stops, however, even most of these, some aiming for a few ticks in each move equal to the spread, still have ‘disaster stops’ in place as experience teaches you that literary anything could happen in a fast moving market. Having a power cut, when workmen are building an extension in your home and you lose ten percent on one trade as you furiously speed dial your broker to get your day trade on cable closed, is an experience related to me by someone who I’d previously considered as far more advanced.

The trader began his trading journal on trading the euro (eur/usd) exclusively in January, 2011 utterly convinced the euro was due a severe correction, his first swing trade was profitable as the new year commenced with a selling off of the euro. However, what transpired thereafter was a stunning climb of the currency versus the dollar from which many position traders (bullish on the euro) have benefited from. The euro climbed from a low of circa 12900 to a high in May of circa 14900. The trader’s timing could not have been worse. His conviction and directional bias was too ingrained and hardwired into his trading psyche for him to ‘let go’ during a time when the euro experienced a massive rally, a rally that many swing traders enjoyed riding up by circa 2,000 pips. Whilst not unprecedented the rally was one of the strongest in recent years but the trader could not let go of his directional and irrational bias. His journal didn’t continue right up to the peak of price in May, his involvement and commentary tailed off from early April onwards, but during the period from January to April he experienced many periods when, despite his losses, his overall commitment remained steadfast. He never revealed his risk per trade, only his starting account balance and lot size.

Looking retrospectively at the weekly eur/usd chart there was a pin bar formed in the last week of January when he became convinced that the euro would be sold off, he was correct (temporarily) and he recovered some of his previous losses. He’d made the ‘classic’ mistake of misinterpreting the information (the ‘doji’) was offering, indecision was prevalent not an overwhelming commitment to a sell off. Then the euro began a major trend move up from the second week in February in what appeared to be an unstoppable journey up to its May high. Another pin bar appeared to be forming at the end of February, the candle pattern was in fact a long shadow and only indicated that sellers had dominated during the recent sessions. However, the biggest issue that was responsible for his series of losses was not his misinterpretation of candlestick patterns but his absolute commitment to his bias and abject refusal to trade by using a stop loss.

There was a fascinating sub text and observation to this compulsive viewing which many other traders missed when watching the majority of the series of trades fail. Most traders pointed out his misinterpretation of candlestick patterns, or offered opinion as to other potential indicator based or pattern based strategies, some offered up differing fundamental analysis, yet only one or two experienced traders issued short and sharp advice using two abbreviations; MM. By the time his journal and reached its final entry best estimates suggested he’d lost circa 70-80% of his account.

I made a calculation and comparison by looking at the daily chart and putting in a hard stop on the HH at each of his short trading decisions. If he’d risked only 2% on each of the circa ten losing trades he’d taken from January to April he’d have lost less than 20% of his account balance and if reducing the percentage in line with the diminishing balance of his account, (as part of a highly disciplined trading plan), then the loss could have been kept at circa 17%. One loss hurts, the other is potentially terminal to your trading career. By using the most basic form of stop placement; the highest high (HH) or lowest low (LL) of the period preceding, or what he believed to be the market’s ‘turning point’, the trader could have minimised his drawdown to a level at which most of us would and should begin to question our overall technique.

Stops also have an inherent quality that most fledgling traders ignore, they remove ‘ego’ from the trade and your prediction as to direction becomes irrelevant given you are simply following market price. There is an irony to the trader’s predicament; if he’d been convinced by his bias but still used stops many seasoned pros would have congratulated him on his discipline and planning. In being so wrong, as wrong as you could possibly be over a series of perhaps ten swing trades, his account balance damage would have been recoverable. Further irony can be gained by looking at where the euro currently is, although his turnaround would have taken ten months had he stuck to his directional bias over the past ten months, but had stayed in the game by the effective use of stops, he’d possibly be close to break even.

« “Capitalism has Destroyed our Belief in any Effective Power but That of Self-Interest Backed by Force.” Wednesday's Child is Full of Woe »