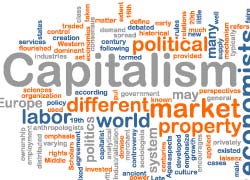 “Capitalism has Destroyed our Belief in any Effective Power but That of Self-Interest Backed by Force.”

Oct 24 • Between the lines • 1540 Views • Comments Off on “Capitalism has Destroyed our Belief in any Effective Power but That of Self-Interest Backed by Force.”

“Capitalism has destroyed our belief in any effective power but that of self interest backed by force.” – George Bernard Shaw..

I experienced a surreal moment when channel hopping late on Friday evening. I’d switched on the tv to catch up on the news and began flicking through the various news channels. When I left the room the topic being covered by the BBC news 24 channel was the Euro crisis. Suddenly I heard a familiar voice, but as I couldn’t see the tv pictures from the other room the context was confusing, it was Sepp Blatter the president of FIFA talking. I chuckled to myself whilst thinking; “surely he’s not involved in saving: the euro, the Eurozone and capitalism as we know it?” He wasn’t, it was other news he was opining on regarding FIFA business.

You have to wonder who’s left to voice an opinion on how to reach a credible solution, who else can be wheeled on stage to add another angle of misdirection to this never ending story; the UK’s Royal Family, Nelson Mandela, Jose Mourinho, the Pope, X Factor’s founder Simon Cowell? The whole episode is crying out to be a Simpsons’ episode were Lisa Simpson finds the solution. Perhaps she could evoke the ghost of 1930′s Chicago gangster Al Capone in the cartoon parody as he states; “Capitalism is the legitimate racket of the ruling class.” Or maybe Henry Ford’s famous quote would be more fitting;

It is well enough that people of the nation do not understand our banking and monetary system, for if they did, I believe there would be a revolution before tomorrow morning.

As Sunday night draws to a close the narrative and rhetoric from EU ‘officialdom’ continues along the similar themes developed over recent weeks, however, the true motivation of those with most to lose is becoming more evident as each day counts down. The major banks, involved in lending to Greece at outrageous levels of interest which have helped propel the country to the edge of default, are simply refusing to take reasonable haircuts on those bonds unless they’re guaranteed the equivalent cash from a different source. Some €100 billion of Greek bonds are set to mature by 2014, it could be regarded as a coincidence that the most exposed banks are demanding circa €100 billion of extra capital.

Those banks on respirator without a rescue plan in sight are mainly French banks, the German banks took their big hits in 2008-2009 as they preferred to avoid the less developed and or secure Eurozone partners and as a consequence have far less exposure. The mainly French banks also want re-capitalising and guarantees that European tax payers underwrite: the bond losses, the recapitalization of the banks and the future potential losses of Spain, France and Italy, that’s how commentators have arrived at the figures mentioned of €2-3 trillion as the total fire power required to cover all contagion eventualities.

Once again the German representatives appear to be offering up the soundest proposals and providing the most logical solutions. Chancellor Merkel is suggesting that (whilst sharp focus is still on Greece) Italy is in a precarious position given their debt is is 120% of their GDP and Greece’s debt (a much smaller country) is currently 160%. Greece accounts for 2.5% of the Eurozone’s GDP, Italy is the eight largest global economy and the fourth largest in Europe, Italy is also the seventh largest global exporter and accounts for circa 17% of the Eurozone’s economy.

Merkel warned in a speech on Saturday that if Italy’s debt remained at 120 percent of gross domestic product “then it won’t matter how high the protective wall is because it won’t help win back the markets’ confidence”. Before the twenty seven European leaders began work on a comprehensive plan to stem the crisis, German Chancellor Angela Merkel and French President Nicolas Sarkozy held a 30-minute private meeting with Italian Prime Minister Silvio Berlusconi officials stated, highlighting concerns that Italy is the next ‘shoe to drop’. Diplomats said they wanted to maximise pressure on Rome to implement labor market reforms to reassure investors worried by its huge debt ratio, second only to Greece’s but dwarfing Greece’s debt in overall size.

Perhaps the most prescient comment with regards to the weekend’s meeting should be left to formally designated EU President Herman Van Rompuy as the chairman of euro summits, a role he has played throughout the crisis. “We have taken major steps to overcome the crisis,” Van Rompuy said. “See you on Wednesday.”

Despite European focus being firmly on the outcome of the various meetings there are important data releases forex traders should be mindful off in the morning session, the PMI figures for Europe and new orders could underpin any belief in a fragile recovery, A Bloomberg survey suggests a median estimate of 48.1 for eurozone manufacturing from a previous figure of 48.5. For services output the expectation is for a median forecast of 48.5, as compared with last month’s figure of 48.8. For new orders analysts expect 0.00%, as compared with the previous figure of -2.10%. The median expectation for the annualised change is 5.80% from 8.40% previously.