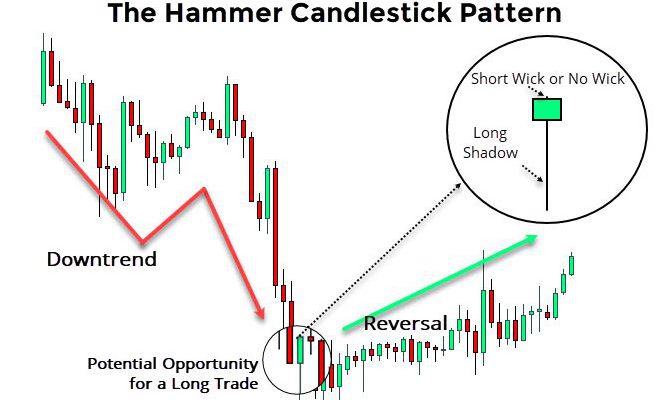 How to trade the hammer pattern for forex day trading?

Mar 28 • Forex Charts, Forex Trading Articles • 298 Views • Comments Off on How to trade the hammer pattern for forex day trading?

The hammer candlestick pattern is common in the forex market and can reveal vital information about trend reversals.

Traders must realize that the hammer candle is about more than just seeing it on a chart. When considered inside the existing trend, price movement and the position of the hammer candle are both critical confirming criteria for this candle.

What is a hammer pattern?

A hammer is a Japanese candlestick, a black or white candle with a little body near the top, a short or non-existent upper shadow, and a long lower shadow (or tail).

A hammer is a candlestick plotting cost pattern when a property sells far lower than its initial price but rebounds during the interval to end around the offering price. This pattern creates a hammer-shaped candlestick with a bottom shadow at least twice as big as the true body.

The candlestick’s body represents the gap between the initial and closure prices, while the shadow indicates the period’s high and low prices.

The hammer candlestick surfaces at the bottom of a trend and indicates a possible (bullish) market reversal. The bullish hammer, which has a short candle body and an extended bottom wick, is the most common hammer candle, and it shows rejection of lower prices. The upside-down hammer, an upside-down bullish hammer, is another pattern traders look for.

Why do we use the hammer pattern for forex day trading?

Hammers are most effective if at least three or more dropping candles accompany them. A declining candle is defined as one that ends lower than the previous candle’s close.

A hammer should have the shape of a “T.” This suggests the possibility of a candle. The candlestick does not mention a price reversal to the upside until verified.

Affirmation happens when the candle that follows the hammer finishes surpassing the hammer’s closing price. This verification candle should ideally reflect significant buying.

During or after the confirmation candle, candlestick traders often aim to add holdings or exit trades. A breakpoint can be positioned underneath the bottom of the hammer’s tail for individuals entering new long holdings.

How to make it work?

A hammer is a trend breakdown means that if one buys the hammer, it’s probably trading against the trend. Therefore, a Trend Line Indicator can be beneficial to enhance the chances of a trade working out.

Place trades near the area of value by having a good risk-to-reward ratio and additional purchasing since hammer does not indicate how the trend is moving since the sequence of candles makes up a trend (maybe more than 100).

Identify a trend that attracts investors to trade. After the trading setup’s parameters are met, an entry trigger, such as a Hammer candlestick, is used to enter a trade.

The hammer candlestick is much like price action trading tactics; it is useful for traders. It assists in determining when the best moment to approach the trade is. However, it is critical to obtain extra information to improve your benefits and reduce your dangers.

« Trading With Bullish and Bearish Flag Patterns Yen hit a seven-year-old low; what lies ahead? »