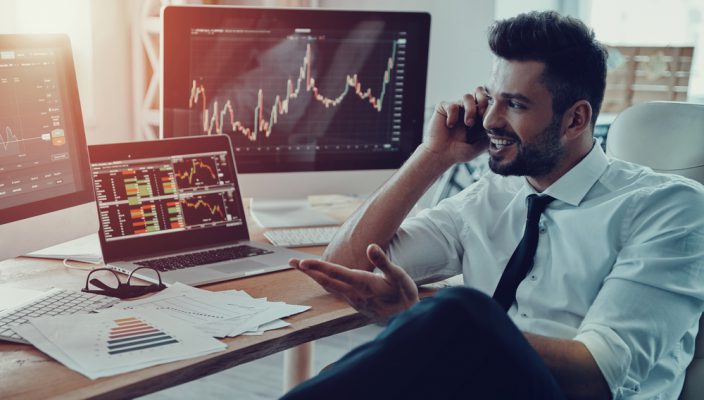 How the gambler’s fallacy can creep into FX traders’ mindset

Jul 9 • Forex Trading Articles, Market Commentaries • 1131 Views • Comments Off on How the gambler’s fallacy can creep into FX traders’ mindset

You’ll immediately recognise the emotions and patterns associated with the gambler’s fallacy; you have an extended series of wins or losses in the market and you begin to think that the next result will inevitably be the opposite. When in reality (based on what can be a random distribution of results) you’re just as likely to see the series continue. There’s no rule of average suggesting that the next result will differ simply because a series of results have been identical.

The most infamous example of the gambler’s fallacy happened in a game of roulette at the Monte Carlo Casino on August 18th, 1913, when the ball landed in black 26 times in a row. This was (and still is) an extremely rare occurrence. The probability of a sequence of red or black occurring 26 times in a row is (18/37) 26-1, or 1 in 66.6 million. Gamblers lost millions of francs betting against black, incorrectly predicting that the streak was an imbalance in the randomness of the wheel and that it had to be followed by a long streak of red.

The phenomenon and theorem is also best illustrated by a coin toss. If after tossing four heads in a row the next coin toss also came up heads, it would complete a run of five successive heads. Since the probability of a run of five successive heads is 1/32 (one in thirty-two) you might believe that the next flip is more likely to come up tails rather than heads again. This is incorrect and is a perfect illustration of the gambler’s fallacy. The event 5 heads in a row and the event first 4 heads then a tails are statistically equally likely, having a probability factor of 1/32.

While a run of five heads has a probability of 1/32 (approx. 3%) the misunderstanding occurs due to not realising this is the probability only before the first coin is tossed. After the first four tosses the results are no longer unknown, their probabilities become equal to 1 (100%). The belief that a fifth toss is more likely to be tails because the previous four tosses were heads because a run of luck in the past influences the odds in the future, forms the basis of the gambler’s fallacy.

Many traders will suffer from the influence of this fallacy, they may have a five trade winning series on a particular security such as EUR/USD and begin to believe that their luck is somehow waning. Therefore, they should stop or reverse their decision making, as inevitably the series will end. When in reality there is no statistical reasoning supporting this irrational behaviour. You could successfully scalp or day trade EUR/USD many, many times if a strong trend has developed until you experience a loss brought on by the trend ending or reversing. There is no mathematical rule suggesting you can’t experience many wins in series before the trend finally ends.

People appear to have a natural cognitive bias to evaluate the probability of a certain event by assessing how similar it is to previous events. According to this view, after observing a long run of red on the roulette wheel, most people falsely believe that black will result in a more representative sequence than the occurrence of an additional red, so people expect that a short run of random outcomes should share properties of a longer run, the deviations from the average should somehow balance out.

When people are asked to create random-looking sequences of coin tosses, they tend to make sequences where the proportion of heads to tails stays closer to 0.5 in any short segment than would be predicted by chance. They’re insensitive to sample size, people naturally tend to believe short sequences of random events should be representative of longer ones. This belief is behind a related phenomenon named “the clustering illusion”; people observe streaks of random events being non-random, when such streaks are actually much more likely to occur in small samples than people expect.

The gambler’s fallacy is attributed to the (mistaken) belief that gambling (and chance) is a fair process which corrects itself in the event of streaks, known as the “just world hypothesis”. Other researchers believe that belief in the fallacy may be the result of a mistaken belief in a form of a person’s internal locus of control. If a person believes that gambling outcomes are the result of their own skill, they may be more susceptible to the gambler’s fallacy, because they reject the idea that chance could be a factor in their outcomes, overcoming any skill or talent.

How the gambler’s fallacy can influence your decision making

In reading the article you’ll undoubtedly have recognised how the fallacy could have impacted on your decision making and trading outcomes. It’s imperative that you allow your trading method and strategy to run over a large series of outcomes whilst paying attention to the law of large numbers. If not then you’re simply guessing on outcomes and allowing yourself to be governed by emotional influences and irrational impulses. That is no way to build a solid trading plan which should be underpinned by: sound reasoning, mathematics, probability and risk. Which are surely the cornerstones and building bricks of trading success?

It’s also important that once you’ve developed a method and strategy which you’re beginning to experiment with and have confidence in, you allow it to run in the markets over a reasonable level amount of time or trades in order to evaluate its potency. Ending it after a series of five to ten traders because it hasn’t worked might be too hasty.

« Sterling and both the Canadian and U.S. dollars will be under the spotlight as key economic data is published U.S. dollar registers gains across the board as sterling slumps and U.S. equity indices have mixed session »