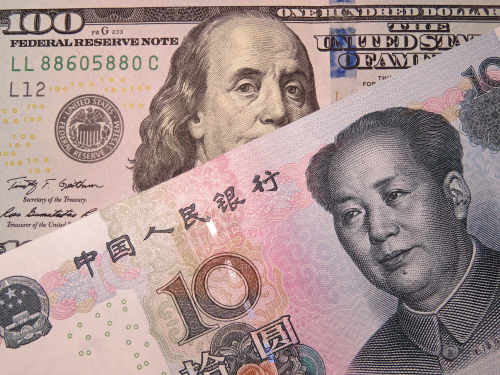 Chinese equity markets close up as optimism increases over China-USA trade deal. Sterling rises as the threat of no deal Brexit recedes

The CSI and Shanghai indices rose by over 1% during the Asian trading sessions, taking the year to date rise in 2019 of the CSI to 26%. Representing a highly significant reversal of Chinese equity markets’ fortunes and in stark contrast to the slump experienced in late 2018. The indices have risen significantly over recent weeks (Shanghai up circa 16% monthly), due to optimism growing that China and the USA, have reached an agreement over trade tariffs.

Reports from the Bloomberg news agency, suggests China will increase its purchasing of USA made goods and arable farming products, in return for all the tariffs to be dropped. A curious proposal, which undermines the reasons the Trump administration gave for applying the original tariffs in 2018. Moreover, with Trump taking to the airwaves on Friday 2nd, to bemoan the high value of the U.S. dollar and the USA likely to announce a record trade deficit this week, the argument put forward to reduce the deficits, particularly with China, will not have been addressed, if the rumoured trade agreement is implemented.

At 9:00am U.K. time, USD/CNY traded down marginally in the London trading session, down 0.18% on the day at 6.701, but up 5.80% on the year. U.S. equity markets futures were indicating gains when New York opens, the DJIA future was up 0.37% and the NASDAQ up 0.56%, with the tech index future indicating an open close to the 7,200 handle. The dollar index, the DXY, traded flat at 96.50, having traded in an extremely tight range for several weeks. USD/JPY also traded close to flat during the early part of the London-European trading session. At 111.85 price is maintaining position above the 200 DMA, sited at 111.31, whilst threatening to regain the critical handle of 112.00.

The only event listed on the economic calendar for Monday afternoon, likely to move the value of USD versus its peers, concerns the latest construction data; according to Reuters, spending is forecast to fall to 0.20% in December from 0.80% in November. However, with the Chinese-USA trade talks making progress, the USA debt ceiling reaching the congress approved $22 trillion level, the country still technically under a national emergency and the North Korea talks ending with no agreement, there are still many political-economic issues percolating in the background, which could impact on the value and price action of both the U.S. dollar and the leading USA equity indices.

Despite the negative reports on Sunday, from the U.K. trade body the CBI, who suggested that trade optimism had reached a six-seven year low, coming shortly after IHS Markit printed the latest manufacturing PMI, revealing on Friday that optimism had reached a 27 year low as stockpiling has reached a 23 year high, sterling rose in early trading. The latest IHS Markit PMI for U.K. construction also missed the Reuters forecast on Monday morning, coming in at 49.5, below the line of 50, separating expansion from contraction.

The chatter in the U.K. political mainstream media, points to the U.K. House of Commons voting to delay Brexit by two months, whilst U.K. Parliament tries to discover an exit agreed by all political parties. At 9:50am U.K. time GBP/USD traded up 0.33% at 1.325, trading in a narrow range, just above the daily pivot point. EUR/GBP traded down 0.45% at 0.856, after breaching S1. Part of the euro’s loss versus sterling, can be attributed to general euro weakness across the board, as opposed to sterling strength. The U.K. FTSE traded up 0.31%, at 10:20am.

European fundamental news was limited to the latest Sentix sentiment index for March, coming in at -2.2 ahead of the forecast of -3.1 and improving from the -3.7 reading recorded in February. Producer prices rose by 0.40% monthly and by 3% year on year up to January, metrics that could indicate that inflation might pick up marginally in the mid term. This could influence the decisions the ECB make in relation to their monetary policy, a narrative they’ll outline on Thursday when they announce their latest rate setting decision. Thereafter, Mario Draghi will hold a press conference, in which he’ll deliver forward guidance, regarding the central bank’s monetary policy. At 10:25am EUR/USD traded at 1.1.34, breaching S1 and down 0.30% on the day, whilst EUR/CHF traded close to flat, in a tight range, close to the daily pivot point. Germany’s DAX traded close to flat, whilst France’s CAC traded up 0.54%.

« FX traders will be hoping for increased price action opportunities to develop, during the trading week Traders of the Aussie dollar need to remain vigilant during the Sydney and Asian trading sessions »