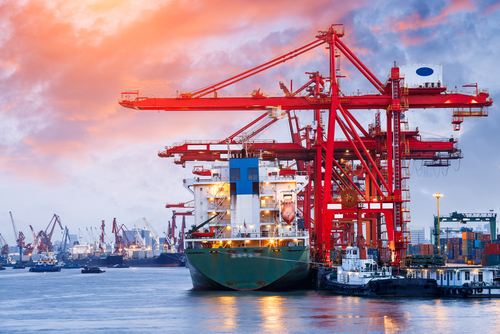 China’s authorities published desperately poor: import, export and trade balance data during the Asian trading session, leading to a significant sell off in Chinese equity markets and a rush into yen, as a safe haven option. China’s exports fell by -20.7% year on year up to February, imports fell by -5.20%, whilst the trade balance fell to $34.46b in February, from $271.6b in January.

This shockingly bad data set, from the globe’s engine of growth, created a ripple effect of negative sentiment throughout Asian and Australasian markets and could impact on the value of USA market indices, once New York opens on Friday afternoon. The ongoing talks between China and the USA regarding the further implication of increasing tariffs, appear to have stalled with no resolution in sight. And with the Chinese manufacturer of smartphones Huawei, preparing to sue the USA, relations at the highest levels of commerce, do not appear to be cordial.

The Shanghai Composite closed down 4.40%, still up over 19% year to date in 2019, as USD/CNY traded close to flat, at 6.730. At 9:00am U.K. time, USD/JPY traded down -0.49% at 111.0, crashing through the third level of support S3 and the 200 DMA, sited at 111.36. Due to the nervousness surrounding China’s trade figures, yen rose versus the majority of its peers, as its safe haven appeal reappeared. Versus EUR, GBP, CAD and both Australasian dollars (AUD and NZD), yen appreciated during the Asian session, with the gains appearing to be capped, as the London session opened.

Poor trade data wasn’t necessarily limited to China on Friday morning. Germany also published factory orders data which missed forecasts; month on month for January orders fell by -2.6%, with year on year orders falling by -3.9%. Similar to China’s position as Asia’s nucleus of growth, Germany is the economic powerhouse of Europe and more specifically; the spark that lights the Eurozone furnaces.

If Germany and China are suffering a contraction in: factory, manufacturing and export growth, then analysts may begin to question if the debt driven growth, experienced by all major economies since approximately 2010, is finally coming to a shuddering halt. Germany’s DAX traded down -0.52%, with France’s CAC down -0.35%, whilst the U.K. FTSE 100 traded down -0.63%.

After experiencing a sell off during Thursday’s trading sessions, as a consequence of the ECB monetary policy statement and new forward guidance direction, broadcast by the ECB president Mario Draghi, the euro recovered marginally versus several of its peers on Friday morning. At 9:45am EUR/USD traded up 0.16% at 1.120. EUR/GBP traded close to flat, at 0.855.

Sterling may come under scrutiny during Friday’s trading sessions as prime minister May prepares to make a desperate appeal to the E.U. to change the withdrawal agreement offer. She’s now given up with her shuttle diplomacy, instead, on Friday she’s due to give a speech in Grimsby, England, a Brexit leavers stronghold. No doubt the speech is carefully choreographed to place the blame on E.U. intransigence, as opposed to U.K. government incompetence. At 10:00am GPB/USD traded close to flat at 1.308, near to the daily pivot point, whilst maintaining position close to the 1.300 handle, the currency pair is circa 100 pips above the 200 DMA.

Focus on Friday afternoon, will turn to USA events and publications on the economic calendar. The latest NFP jobs data will be published at 13:30pm U.K. time, as will be recent wage growth data and the latest headline, unemployment figure. Wages are forecast by Reuters to show a rise of 3.30% yearly, NFP jobs are forecast to show growth of 185k in February, whilst the unemployment rate is predicted to fall to 3.8%, close to its 40 year low. Canada also publishes similar: wage, unemployment and employment data at the same time as the USA data is published. As a consequence, both the Canadian and U.S. dollars will undoubtedly come under scrutiny.

« Euro slumps, as the ECB keeps the key interest rates unchanged, but add further monetary stimulus to the Eurozone economy Focus will remain on the U.K. pound, during the trading week beginning March 10th, as three critical Brexit votes will be held in the U.K. parliament »