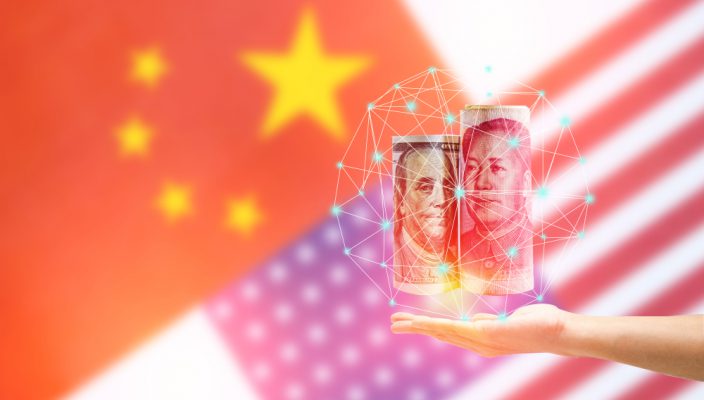 Despite the technical application of up to 25% tariffs on Chinese imports into USA ports, from midnight USA time, on Friday May 10th, Chinese equity markets rose during the Asian trading session. As to whether the rise is a moderate relief rally now the threats have become reality, or Asian market investors expect a resolution to be agreed, will become clearer over the coming trading days. It must be noted that, according to USA sources, the raised goods’ tariffs will only apply to goods leaving Chinese ports from Friday morning and not goods already in transit, or currently at USA ports. Therefore, a window is in place for an agreement to be reached, before the impact of the raised taxes, will be absorbed by commerce and ultimately USA consumers.

At 8:00am U.K. time the Shanghai Composite traded up 3.02% whilst the CSI index traded up 3.43%, the largest gains the indices have recorded in several weeks. Clawing back some of the significant losses (of approximately -4.5%) recorded during the trading week, since President Trump announced his administration’s increased tariffs, via social media, on Sunday May 5th.

At 8:00am USD/CNY traded down -0.16% at 6.825. At 8:30am U.K. time USD/JPY traded at 109.77, in a tight daily range, close to flat, with no directional bias, after printing a low during Thursday’s sessions, not witnessed since February 2019. Yen’s safe haven appeal has risen significantly during the trading week, due to the threat of increased tariffs, on a weekly basis USD/JPY is trading down -1.45%. U.S. equity market futures were indicating a marginal fall when New York opens on Friday afternoon; the SPX future down -0.16%, and the NASDAQ down -0.11%.

USA economic calendar events on Friday will focus on the latest inflation data. The CPI figure annually up to April, is expected to rise to 2.1% from 1.9%, whilst monthly the April figure is forecast to come in at 0.4%. Such figures could create speculation in forex markets that the FOMC/Fed might consider altering their current, dovish, monetary policy outlook, based on the key inflation figure breaching the inflation target of 2%.

During 2018, the Fed chair Jerome Powell, had continually voiced his opinion that the USA interest rate should normalise, suggesting that during 2019 the rate could rise to circa 3.25%-3.5%. However, that hawkish stance and policy outlook was quickly altered, as USA equity markets suffered a slump in quarter 4 2018. The sell off, which caused the major U.S. equity markets to enter bear market territory, wasn’t necessarily related to rates rising to 2.5%, more likely the self inflicted trade war the USA administration induced versus China, caused the crash in equity markets.

At 8:40am U.K. time, EUR/USD traded in a tight range, close to flat at 1.122, above the daily pivot point, with no directional bias. The euro registered early gains versus several peers; EUR/GBP up 0.11%, at 0.863, trading above the daily pivot point, registering weekly gains of 0.45%. Germany posted significantly improved trade data on Friday morning; exports have risen by 1.5% in March, beating the estimate of -0.4%, whilst imports rose to 0.4%. Consequently, the trade balance experienced an uplift; coming in at €22.7b, ahead of the €17.9b registered in February. Eurozone equity indices opened in positive territory on Friday morning, after the much improved data suggested any thoughts of a German recession, might be exaggerated; Germany’s DAX traded up 0.97% and France’s CAC up 0.88%. The U.K. FTSE 100 traded up 0.54%.

Focus in the London-European trading session quickly turned to the latest, preliminary, GDP growth figures, published at 9:30am U.K. time. The quarter 1 GDP came in as forecast at 0.5%, with the annual rate coming in as forecast at 1.8%. However, the March growth figure came in negative at -0.1% for the month, missing expectation of a flat reading and falling from the 0.2% growth recorded in February. This negative reading could suggest that the annual growth pattern is scheduled for a reduction, over the coming months.

Analysts quickly identified that stockpiling, in anticipation of a no deal Brexit from March 29th, was the key driver for U.K. GDP growth prior to March, as that stockpiling began to reduce, so did GDP. Consumer spending also helped to underpin the GDP figures, whilst construction spending slumped alarmingly; falling by -1.9% monthly in March. The index of services fell in the month, whilst the trade balance deficit rose sharply to -£5408m.

Sterling remained relatively unaffected by the data series release, as the headline, year on year, GDP figure came in as forecast, but the monthly figure recorded a concerning slump. At 9:45am U.K. time, GBP/USD traded close to flat at 1.300, maintaining position circa 50 pips above the 200 DMA, sited at 1.295. Versus its other major peers, GBP continued to trade in narrow ranges, without altering direction, after the GDP data was broadcast.

« USA equity markets recover after a significant sell off during the early part of the New York session on Thursday, U.S. dollar rises versus several peers. GDP and soft sentiment figures for both Germany and the Eurozone, will reveal the strength of the wider area’s economic performance over recent months. »