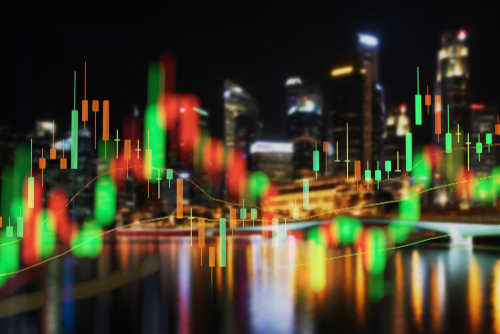 The equity markets in China fell during Tuesday’s overnight/morning Asian session, as global growth fears continued to stalk Chinese markets. The Shanghai Composite index fell by -1.51% and the CSI by -1.13%. Chinese investors could be trading ahead of the curve, by regarding the lack of definitive progress in relation to the tariff talks as bearish, whilst profit taking could be gathering momentum, based on the indices rising by over 20%, in 2019 year to date.

At 8:45am U.K. time USD/CNY traded up 0.03% at 6.71, up 7.41% yearly. The fall in the value of yuan versus the U.S. dollar, has ensured Chinese imports into the USA (based on a stronger dollar) have been significantly cheaper. However, the USA balance of trade deficit with China, is still rising; registering an approximate -$420b deficit in 2018. Confidence in Chinese markets could be restored as a Chinese delegation are due to meet leading representatives of the E.U. for trade talks on Tuesday.

After slight falls registered on Monday, the futures markets for USA equity indices were indicating marginal rises, for both the SPX and NASDAQ, when the New York trading session opens. The stability of the Trump administration, after an enquiry appears to have absolved him of (by proxy) election interference with Russian hackers, could help to soothe investors’ nerves. At 9:10am, the dollar index, DXY, traded down -0.24% at 96.42. USD/JPY traded up 0.24%, oscillating between the daily pivot point and the first level of resistance, as price action kept price just above the 110.00 handle.

The U.K. pound traded in tight ranges versus the majority of its peers during the early sessions, as FX traders attempted to price sterling based on the recent activity in Parliament on Monday evening. MPs took control of the Brexit process, supposedly wrestling decision making from the U.K. government. As to whether this will lead to a second referendum choice, is impossible to predict. Therefore, both analysts and FX traders, are still pricing and parking sterling in a wait and see mode, with the country still scheduled to leave the E.U. on either April 11th or May 22nd. At 9:30am U.K. time GPB/USD traded down -0.25% at 1.316, oscillating between the daily pivot point and the first level of support, threatening to breach S1.

This pattern of price action was repeated by many sterling pairs, as mortgage approvals in Britain according to the BBA, fell by circa 11% to 35,300 from 39,600. The importance of the U.K. housing market, on overall U.K. consumer sentiment and the associated trickle down economic activity it causes, can’t be underestimated. The fall will undoubtedly be blamed on consumer Brexit fears. The U.K. FTSE traded up 0.37%, in a positively correlated move versus the GBP/USD fall, based on the majority of quoted firms being USA owned.

European calendar news on Tuesday, concerned the latest French GDP data, coming in at 0.30% for Q4 2018, with Q4 annual growth coming in at 1%. The latest GfK confidence reading for Germany came in at 10.4 for April, missing the Reuters forecast of 10.8. France’s CAC index rose by 0.30% whilst the DAX fell marginally by 0.08%. At 9:55am EUR/USD was trading in an extremely tight range, right on the daily pivot point, close to flat at 1.131. The euro made gains versus both JPY and GBP, owing more to the respective currencies’ weakness, as opposed to euro strength.

Focus and sentiment this afternoon, between 12:30-13:00pm, before the New York session opens, will centre on the latest housing data for the USA. Permits and housing starts are forecast to show negative readings for February, after a significant boost in January. This adjustment could be related to the govt shutdown in January, simply needing to work its way out of the system. The Case Shiller index of the top twenty USA cites, is forecast to reveal a fall to 4% annual growth for January.

At 14:00pm the latest Conference Board consumer confidence index reading will be published, the forecast is for a rise to 132.0 in March, from 131.4 in February. Despite being a soft data metric, the Conference Board is a highly respected, legacy institution in the USA and its data is carefully monitored, for signs of changes in USA citizens’ confidence and sentiment.

« Sterling pairs trade in tight ranges as Brexit confusion reigns, Euro steadies as IFO soft data for Germany comes in ahead of forecast Analysts and FX traders will focus on the RBNZ interest rate decision and any accompanying monetary policy statement »