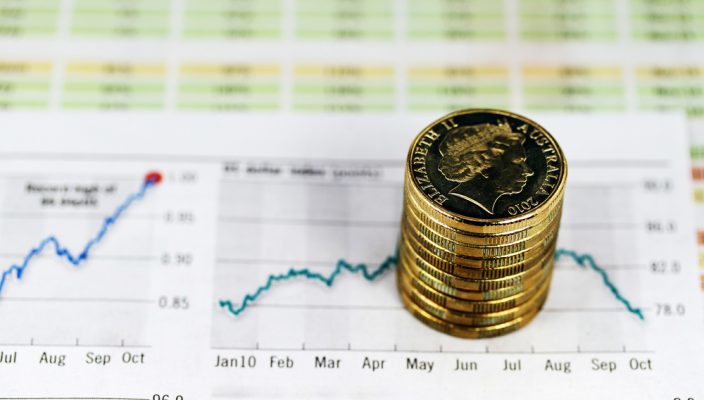 Aussie dollar crashes versus its peers, as inflation falls significantly, German IFO metrics miss the forecasts, adding to fears that Germany could be entering recession.

The Aussie dollar slumped during the Sydney-Asian trading session, analysts quickly attributed the fall based on inflation coming in below expectations at 1.3% year on year in March, falling from 1.8%, as Q1 CPI came in at 0.00%. The falling CPI metric is an indication of weak growth, therefore, the RBA, Australia’s central bank, are less likely to increase the key interest rate. At 9:30am U.K. time, AUD/USD traded at 0.704, down -0.82%, crashing through the three levels of support, to S3, whilst hitting a two month low. Other AUD pairs followed similar patterns of behaviour.

European calendar releases in the morning session, concerned the latest IFO readings for Germany, with all three metrics missing the Reuters forecasts. Ranking as medium impact calendar events, the IFO readings will have added to increasing fears that the German economy could be stagnating, or perhaps heading for a technical recession, in various sectors. At 9:45am U.K. time, EUR/USD traded at 1.121, down 0.10%, oscillating in a tight range, between the daily pivot point and the first level of support. The euro experienced mixed trading fortunes versus several of its peers, rising sharply versus AUD and NZD ,as a consequence of the weak Aussie inflation data and falling sharply versus the Swiss franc. The Swissie rose in early trade versus the majority of its peers, as the Credit Suisse survey metric came in ahead of forecast.

The volatility readings for sterling trading, slumped significantly during the two week Easter Parliamentary recess/holiday, revealing how Brexit related news is the primary factor for U.K. pound movements. As the MPs trudged back to their workplace on Tuesday April 24th, volatility immediately increased, as the subject of Brexit returned to discussions in the FX industry. GBP/USD fell during Tuesday’s sessions, owing more to dollar strength than pound weakness, but that falling momentum was carried forward into Wednesday’s sessions. Despite the ultimate date for the U.K. exit being now set at October 31st, and the U.K. budget deficit reaching a seventeen year low, there was little appetite to bid up GBP, during the London-European session.

The UK borrowed £24.7b to balance the books in the last financial year, figures released on Tuesday morning revealed, the lowest since 2001-2002, and down on a year ago, borrowing in the latest full financial year was £1.9b more than the £22.8 billion forecast by the OBR (Office of Budget Responsibility). As a deficit, U.K. borrowing is now only 1.2% of GDP, when back in 2008-09 the U.K. borrowed £153b, or 9.9% of GDP, when the economy careered into recession, whilst taxpayers bailed out the U.K. banks. Shortly after the encouraging data was published, GPB/USD traded at 1.290, failing to reclaim the 1.300 handle, and trading just below the 200 DMA, sited at 1.296, falling to a low not witnessed since February 2019.

Attention will turn to the Canadian economy during the afternoon session, as the BOC broadcast their latest decision on the benchmark interest rate, currently at 1.75% there is little expectation amongst the analyst community for a rise, based on Canada’s current benign economic performance. Naturally, focus will quickly turn to the Governor Stephen Poloz’s statement accompanying the decision, as analysts comb the detail for any clues that the BOC are considering altering their current dovish monetary policy stance, to potentially raise rates on the near term future. FX traders who trade CAD, or who specialise in trading breaking news events, would be advised to diarise the announcement, scheduled for release at 15:00pm U.K. time. At 10:45pm USD/CAD traded up 0.20%, oscillating between the daily pivot point and the first level of resistance.

As a commodity currency, Canada’s dollar has experienced considerable gains over recent sessions, after the Trump administration put Iran’s customers on notice, that they’d be subject to sanctions, if they continue buying Iran’s oil. WTI climbed above $66 a barrel, a level not witnessed  since October 2018. Despite falling by -0.66% on Wednesday, price held above the 66.00 handle. A level that might be tested, once the DOE reveals the latest energy reserves detail for the USA economy, at 15:30pm this afternoon.

« U.S. dollar index reaches a high not witnessed since June 2017, GBP/USD falls to two month low, as Brexit issues return. What is volatility, how can you adjust your trading strategy to it and how can it impact on your trading results? »