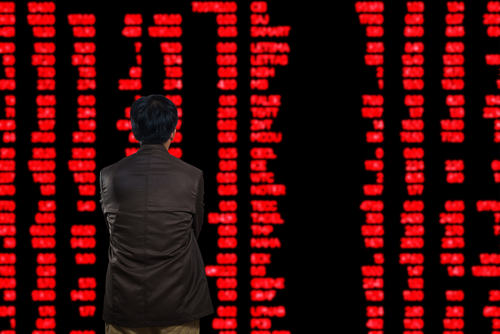 Asian markets fell during the Sydney-Asian trading session, the Shanghai Composite closed down -0.92%, whilst Japan’s Nikkei index closed down -1.61%, reducing the year to date 2019 gains, for Japan’s leading index to 5.09%. The risk off tone has remained due to global trade fears and bond yields falling. Australian and New Zealand government bond yields both hit a record low on Thursday, on expectations of interest rate cuts, after both the RBNZ and previously the RBA adopted dovish tones, in their latest monetary policy statements. Bond yield fears are also hitting confidence in USA equity markets, after the recent inversion of the yield curve caused recession fears; three month yields exceeded ten years, indicating there’s less confidence in lending, over a longer period.

FX traders’ attention will begin to turn towards the latest USA GDP growth figures, the data will be published at 12:30pm U.K. time, Reuters predict a fall to 2.4% from 2.6% for QoQ annualised, for the fourth quarter. A miss or beat of the forecast, could cause both USD and USA equity markets to react, therefore traders would be advised to remain vigilant to the release.

The indicative voting process in U.K. Parliament, a method designed to attempt to discover a route out of the Brexit deadlock, ended with little progress, during Wednesday evening’s gathering of MPs in the House of Commons. None of the ideas proposed won, therefore, FX analysts and traders quickly deduced, that no deal might be the most likely outcome. Parliament actually appears unsure as to what happens next, despite apparently taking control through this indicative process.

Sterling sold off versus its peers, shortly after the results of the indicative votes were announced on Wednesday evening and by 9:30am U.K. time on Thursday, GPB/USD traded below the daily pivot point, down -0.33% at 1.314, down -0.41% monthly. EUR/GBP traded close to flat at 0.855. GBP/JPY traded down -0.41%, although the losses were partly attributable to yen strength, as opposed to U.K. pound weakness. In a positively correlated move, due to most companies being American owned, the U.K. FTSE 100 rose by 0.62% in the early part of the London-European session, as GBP fell versus USD.

Eurozone indices, the DAX and CAC, rose by 0.44% and 0.39% respectively, whilst EUR/USD traded in a tight range, with no directional bias, close to the daily pivot point and flat at 1.125. Various sentiment readings for the Eurozone were published at 10:00am, all missed the Reuters forecasts. Despite being low impact calendar events, the combined impact of these sentiment metrics, could lead to an overall drop in market sentiment for the Eurozone and the wider European Union economies.

The dilemma of Turkey’s: economy, banking system and the country’s currency the lira, has been off the mainstream financial radar since the third quarter of 2018, when the currency plunged in value versus the U.S. dollar. Over recent day’s concerns have risen, due to what’s perceived as President Erdogan’s mismanagement and clumsy interference, in the country’s economic affairs.

The Turkish lira fell sharply versus the U.S. dollar in early trading on Thursday; down almost 5% at circa 5.60 lira to the US dollar. USD/TRY traded close to the five month high struck last week, although still trading significantly below the levels of circa 7.00, recorded in August 2018. The worries over Turkey are not contained to the currency, concerns of over its banking system and economy, are causing many analysts to ponder if its predicament could be a catalyst of contagion, throughout the European banking system.