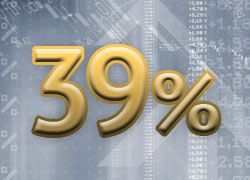 39% Of Forex Traders Are Profitable

I hope you’re OK reader, after all that must have come as quite a shock. Now you’ve picked yourself up the floor, after reading the article title, which is a fact (well kinda), we’ll dwell on the subject at hand; why do so many lose at trading forex and what are the adjustments so many have to make in order to be in that top forty percent of winners?

OK, before we go any further let’s firstly deal with the 39% of winning traders quote. The fact comes as courtesy of forexmagnates in their redux lite version of a report covering the profitability and performance of USA based forex brokers. The leading figure was 39.1% client profitability from a broker who had circa 24,000 active accounts. There’s also other interesting snippets of information that are worth noting before we move on.

There was a steep fall in the number of accounts and activity levels in 2011 whilst the percentages of profitable traders increased. This could suggest a couple of interesting points, firstly are we collectively getting better at what we do? Or (and it’s not mutually exclusive) have a lot of ‘amateurs’ left the arena, gone back to the day job, leaving the numbers to be enhanced by the superior or more proficient traders? More importantly the number of brokers has shrunk, only the fittest of traders aided by most regulatory compliant firms will thrive.

The US retail forex industry is now showing obvious signs of slow down, the number of non-discretionary retail forex accounts held with US based reporting brokers down to record 97,206, the lowest count reported since Q3 2010 when first such report was released. The extreme regulatory climate has made it extremely difficult for American brokers to attract new clients. However, out of the top ten forex clients listed the lowest recorded level of profitability was circa 32%.

It’s fascinating how many of us would receive a paradigm lightening bolt to our pre-conceptions when hit with the kind of figure that led this article. I’m not alone in taking ‘at face value’ some of the data and assumptions that come our way as forex traders. Instinctively I ‘knew’ that the unsubstantiated figure often hurled around trading forums; that only 10% of traders are profitable, was nonsense.

Having enquired at director level and read a comprehensive investors intelligence report, the reasonable figure for success was estimated at 20%, double the previous assumption, but 39% certainly took many by surprise the first time it was published, even more so that the top ten USA brokers have clients enjoying a 32% success rate. There is, however, a caveat, my twenty percent figure includes spread betters who could in theory be skewing the data due to being much worse traders (en masse) than pure play forex traders, a theory worth examining at a later date.

A question often raised by these type of success stats is “are a tiny percentage of successful traders distorting these figures?” But generally percentages, averages and the distribution of random data doesn’t work like that, and we should already know this being traders. If circa 40% of trades are profitable then the figure for the percentage of actual traders being profitable will be fairly close to that number.

In the first paragraph we posed the question why are so many traders unprofitable? Well armed with this new information I wonder if that assumption shouldn’t be examined in more detail. Firstly, out of the circa 97,000 live accounts held in the USA roughly one third are profitable, now not all of these account holders will be full time dedicated sole occupation forex traders, some accounts would be used as ‘punting’ accounts, folk who bet as opposed to trade (and we can save the obvious cerebral discussion on the difference for another time).

It’s impossible to gauge that breakdown of actual numbers of profitable traders from the information and data, but a figure above 50% would be a fairly safe bet and let’s just take our logic a stage further; in order to be full time, (for some time), the vast majority would have to be profitable, otherwise they’d simply give up the job. It’s interesting to note the further away we’re moving from this fantasy 10% figure the more we analyse a small piece of hard (audited) data.

There’s another aspect to this debate on success that’s also worth mentioning, perhaps supporting the view that FX is the best environment to trade in. If the wider trading success figure is closer to 20%, but the top ten USA FX brokers’ clients are all above 32%, then are we being delivered an obvious message there? If you want to enhance the probability of being a profitable trader then trade FX over and above equities, or indices and only consider using (dare I say it) an ECN/STP broker such as FXCC.

Here’s my own take on a more human level so to speak; I refuse to accept that anyone who has gone through my pain barriers over the past five years or so, who has gone to the extremes of discovery I realised was compulsory in order to become a consistently profitable forex trader, wouldn’t ultimately be successful and by successful I’d suggest a metric of taking a regular and reasonable salary or investment return of the forex market. And as I’ve stated on numerous occasions unless you attack our ‘forex challenge’ full time you’ll never ‘kick off the shoes’ and trade part time in a laid back fashion, that’s a luxury that only comes from experience.

Back to the question posed in the initial paragraph; “why do so many lose at trading forex and what are the adjustments so many have to make in order to be in that top forty percent of winners?” I’ll leave you with six reasons and please feel free to join in on the blog with your own suggestions or additions. Now I’m not about to ‘eulogise’ on the reasons and of provide solutions, it’s a straightforward list and there’s no riddle, the answers are there, the solution evident.

But firstly a recap, if close on forty percent of traders are successful then success as a profitable forex trader may be more in reach than you’d first envisaged. And that one figure, far higher than most would have anticipated, should be heralded as encouragement for fledgling traders.

« Does Iceland's Recovery Make Them The Real Poster Boy For The Financial Crash? Are U.S. Consumers All Done With Shopping? »