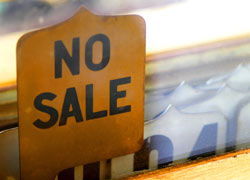 Are U.S. Consumers All Done With Shopping?

U.S. consumer spending collapsed in December, signaling slower consumption early in 2012. The figure was the weakest reading on spending since June 2011, the Commerce Department released on Monday, following two weak gains in October and November. Spending (adjusted for inflation) dipped 0.1 percent last month after edging up 0.1 percent in November. The fear must now exist that the January and February figures will fall far snort of expectation.

Permanent Eurozone Rescue Fund Edging Closer
European leaders agreed on a permanent rescue fund for the euro zone on Monday, 25 out of 27 EU states backing the German-inspired pact for stricter budget discipline. The summit focused on a strategy to revive growth and create jobs at a time when governments across Europe are having to cut public spending and raise taxes to tackle their mountains of debt.

EU Council President Herman Van Rompuy said a deal is needed this week in order for it to be finalised in time to avert a Greek default in mid-March when it faces significant bond repayments.

The leaders have agreed that a 500-billion-euro European Stability Mechanism will enter into force in July, a year earlier than planned. Europe is already under pressure from the United States, China, the International Monetary Fund and some member states to increase the size of the financial firewall.

Greece Swap Deal Edges Closer
Negotiations between Greece and bondholders over restructuring the 200 billion euros of debt made progress over the weekend, but were not concluded before the summit. Until there is a deal, EU leaders cannot move forward with a second, 130-billion-euro rescue program for Athens, pledged at a summit last October.

Germany caused outrage in Greece by proposing Brussels takes control of Greek public finances to ensure it meets fiscal targets. Greek Finance Minister Evangelos Venizelos said that to make his country choose between national dignity and financial assistance ignored the lessons of history. Merkel has played down the controversy, saying EU leaders had agreed in October that Greece was a special case that required more European help and supervision to implement reforms and achieve its fiscal targets.

Combine ESM with EFSF?
The ESM was meant to replace the European Financial Stability Facility, a temporary fund that has been used to bail out Ireland and Portugal, pressure is mounting to combine the resources of the two funds to create a super-firewall of 750 billion euros. The IMF says if Europe puts up more of its own money, the action will convince others to give more resources to the IMF, boosting its crisis-fighting abilities and improving market sentiment.

Market Overview
The yen strengthened versus all of its major counterparts as concern increased that Greek bailout negotiations will hinder efforts to resolve the financial crisis, boosting demand for haven assets. The yen appreciated 1 percent to 100.34 per euro at 5 p.m. in New York and touched 99.99, the lowest level since Jan. 23. The Japanese currency strengthened 0.5 percent to 76.35 per dollar, reaching 76.22. It touched 75.35 yen Oct. 31, a post World War II low. The euro declined 0.1 percent to 1.20528 Swiss francs after sliding to 1.20405, the weakest since Sept. 19.

Indices, Oil and Gold
Stocks slid on Monday due to worries that Greek and Portuguese debts could weigh on regional and global growth, hopes the U.S. economy can decouple from European issues helped U.S. equities close off the day’s lows.

Brent crude oil futures extended losses as supply disruption fears eased after the Iranian parliament postponed a debate about halting crude exports to the European Union. In London, ICE Brent crude for March delivery settled at $110.75 a barrel, dropping 71 cents. In New York, U.S. March crude fell 78 cents to settle at $98.78 a barrel, after trading from $98.43 to $100.05.

« 39% Of Forex Traders Are Profitable How To Fiscal Your Compact, Or Compact Your Fiscal..Or Something »