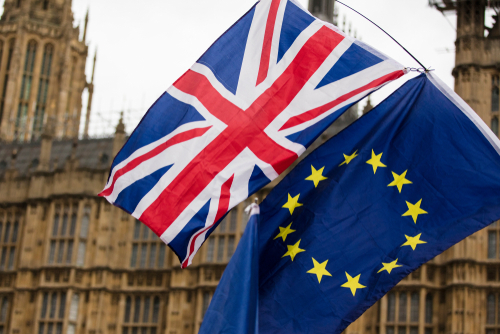 The U.K. pound surged during the latter stages of the New York session, as the U.K. prime minister flew off to Strasbourg to meet with the E.U. Brexit negotiating team. Unfounded rumours had circulated around Westminster during Monday afternoon, that the E.U. had finally relented and were prepared to deliver a compromise, ensuring that the problematic backstop issue was declared as temporary and not permanent. The U.K.government was scheduled to make an announcement at 10:00pm U.K. time on Monday 11th March.

At 20:00pm U.K. time GBP/USD traded at 1.313, up 0.97% on the day. Initially falling through S1, price reversed direction as cable whipsawed in a wide range, taking out the second level of resistance R2, towards the latter stages of the New York trading session. Sterling pairs experienced similar price action throughout the day’s sessions; whipsawing in wide ranges, initially bearish, to then change direction, registering significant gains.

Once news had been broadcast from Strasbourg; that some extra legal clarification had been wrapped around the withdrawal agreement, at 23:20pm U.K. time the daily GPB/USD rise reached 1.71%, as price breached R3. On Tuesday evening, the U.K. House of Commons is still set to hold the second meaningful vote on the withdrawal agreement, FX traders can therefore possibly expect more of the same, intense, whipsawing action, as the day’s Brexit developments unfold.

At 23:20pm EUR/GBP traded down -1.44% at 0.850. European equity indices rose during Monday’s sessions; FTSE closed up 0.37%, DAX up 0.75% and CAC up 0.66%. Germany’s improved current account balance, together with improving export and import data, helped raise market sentiment in the Eurozone. EUR/USD traded up 0.09% at 20:00pm at 1.125, as the euro made gains versus the majority of its peers, with the exception of its significant fall versus sterling.

USA equity markets experienced a surge during the New York session, as Donald Trump announced the latest budget expenditure statement for the USA economy, for 2019-2020. He revealed a record spend of $4.75 trillion up to 2020, including $8.6b for his Mexico-USA border wall. Unsurprisingly, he bolstered tax cuts to wealthy individuals and corporations, at the expense of ordinary citizens, as he took a scythe to universal, USA health care services. Over the next ten years, Medicaid will be cut by $1.5 trillion, Medicare will be slashed by $850 billion, whilst social security will be cut by $25 billion per year.

Donald Trump’s budget for 2019 would hike defence spending by 4%, to $750 billion, according to Reuters. It calls for a 23% cut to the State Department and 31% cut to EPA, he would cut foreign aid by $13 billion. Trump is also proposing an $861b increase in base defence spending over the ten year period. And he proposes to pay for the increased spend by cutting over $1 trillion from: education, affordable housing, nutrition assistance and the needs of working families over the ten year period. At 20:30pm U.K. time the SPX traded up 1.47% and the NASDAQ traded up 2.02%. USD/JPY traded up 0.06% at 111.2, whilst USD/CHF traded up 0.32. The Swiss franc fell versus the majority of its peers, during Monday’s trading sessions.

Tuesday is an extremely busy day for U.K. high impact calendar news. At 9:30am U.K. time a raft of data will be published by the U.K. stats agency, the ONS. The latest monthly GDP growth figure for January will be broadcast, expected to come in at 0.20% according to Reuters, with Q4 2018 forecast to come in at 0.20%. At the same time the latest U.K. data on: manufacturing, construction and industrial performance will be published. Monthly (for January) improvements are predicted, but year on year the series of figures for production and output are forecast to remain negative. This raft of ONS publications, coming on the day when the U.K. Parliament is due to take another critical Brexit vote, could result in sterling experiencing intense speculation, during the day’s trading sessions.

At 12:30pm U.K. time on Tuesday, before New York opens, the latest CPI data for the USA economy will be published, the Reuters forecast is for the rate to be held at 1.6% YoY. The latest weekly earnings rise will be revealed for February (year on year), which is expected to come in close to the January rate, at 1.90%. Both the CPI and the latest wage data, always has the propensity to move the value of USD, particularly if the figure misses, or beats forecast. Therefore, FX traders who specialise in USD, should be prepared for these releases.

Late evening on Tuesday, as the Sydney session opens and the Asian session awaits, the value of yen could come under increasing focus, as the latest January machine orders data for Japan are published. Month on month, the orders are forecast to fall by -1.5%, with the year on year fall forecast to accelerate to -2.10%. With the Japanese economy under scrutiny, due to recent poor key metrics and the neighbouring Chinese economy suffering, analysts could downgrade the value of yen, if the data relating to factory performance, misses the economists’ targets.