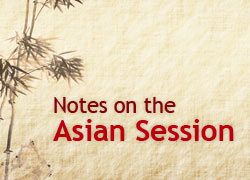 Notes On The Asian Session

May 17 • Forex Precious Metals, Forex Trading Articles • 1097 Views • Comments Off on Notes On The Asian Session

After four consecutive sessions of battering, Gold futures prices nudge higher at the early Globex by over half a percent amid optimism of the Fed minutes that intimated a several members support for additional monetary easing should the economic recovery lost momentum.

Despite the Japan GDP number exceeded the estimates, shares are not showing any inclination to the optimism, but the Chinese bourses are quoting green as their monetary easing is to be effective from tomorrow.

Meantime, Euro has inched up which we think it is a mere pull back. With more than 1trillion Euros withdrawn this week, Greek banks will have to be recapitalized and there is an echo for LTRO3. But this is the first time ECB stopped temporary lending to Greek banks as they are undercapitalized. This would put pressure on the Euro and the compounding fear of Greek exit may again rattle the market sentiment.

So, contagion fears and a most likely rejection of austerity measures on June 17 re-election may put Euro and other asset classes under threat. Gold is also no such exception in this case. From the economic data front, the US manufacturing may show improvement and the jobless claims may also decline after the manufacturing activities improved.

This may support the dollar in evening. Said above, Gold is expected to remain range bound for the day as technical pull back is expected. However, as discussed, concerns are not gold friendly at present. So, even if a pull-back is seen, it might not push it to a much higher extent.

As discussed in gold’s outlook, this rise is expected to be a mere pull back as there are no such reasons for the market to be very optimistic except yesterday’s FOMC remark for a open door of next easing.

On the other hand, the Greek exit is the matter of concern for now as the ECB also stopped lending to their banks since those are heavily undercapitalized.

We therefore expect the Euro to remain under strain and hence silver may fall once the Europe opens. The US economic releases are also supportive for the economy which might put pressure in the evening. Therefore silver is also expected to remain confined within a range.

Currently during early Asian session, Crude oil futures prices are trading above $93/bbl with gain of more than 0.40 cents in Globex electronic platform.

Most of the Asian equities have opened in a positive note, driven by more than expected GDP numbers reported from Japan. Thus, oil prices might have taken positive cues from positive trading equity market. Industrial production of Japan is also expected to climb up, which may support oil prices to remain on higher side in the Asian session.

Most importantly, from minutes of FOMC meet report released on yesterday night indicated a green signal for third quantitative easing if further slowdown in economy will be seen. Lower rate of unemployment, improving industrial production and rising housing sector of US paints a brush of improving economic situation. Thus, oil prices may trade on higher side on speculation of rising demand from world’s largest oil consuming nation US. However, concern of Greece exit is still on the Global financial market, after strong statement given by ECB  Chairperson Mario Draghi.

The ECB said it won’t compromise on key principles to keep Greece in Euro area. Thus, rising speculation of Greece exit from the Euro area is becoming strong which may keep Euro under pressure.

So, oil prices may drive the bearish trend during European session. In the US session, market will be eying on US weekly jobless claims data which are expected to fall, whereas one of the major manufacturing index to climb in May. Thus, pull back in the US session is expected in lieu of positive data expectation from US.

Nevertheless, today is the day for Seaway pipeline reversal which will reduce the glut of stocks from Cushing. Thus, if any news on this hit the market oil prices may fluctuate from its trend.