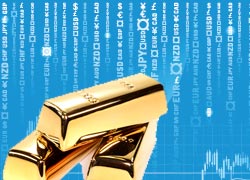 Gold On The International Markets

May 17 • Forex Precious Metals, Forex Trading Articles • 2599 Views • Comments Off on Gold On The International Markets

International gold prices have lost almost all their gains this year, trailing even weaker stock markets, but experts say the precious metal is poised to bounce back in the medium to long term even if it loses more lustre in the short term.

Global prices of the metal had plunged to $1,547.99 per ounce, the lowest in 2012, amid concerns over the financial turmoil in Euro zone, but have inched back to $1,560 after positive data about the German economy and demand from Southeast Asia and India.

Unlike gold, the stock market is up 5.6% in 2012 despite heavy losses since mid-February.

India the world’s second largest gold importer, the decline in gold prices was offset by the rupee’s depreciation. But many analysts and traders expect the currency to appreciate in the medium term. Analysts, economists, fund managers, bullion traders and jewellers say the yellow metal will bounce back and may give returns of 10-15% in three-six months depending on the value of the rupee.

Like every asset class, gold is in a consolidation phase. Though it’s currently in a bearish phase due to geopolitical uncertainty, it will bounce back shortly with broker claiming:

Gold still remains a safe haven and investors should add gold to their portfolio. At least 10-15% of their investments should be in gold

Gold prices plummeted as the euro sank against the greenback on worries that a worsening debt crisis in Greece could spill over to its neighbours and the country may exit the Euro zone.

Though gold is trading at its lowest since December, Morgan Stanley said the metal’s Bull Run “is not over” and there were buyers at current prices. The recent selloff is “consistent with distressed selling and long liquidation”, but prices would recover in coming weeks. Although many institutions including UBS and Bank of America have reduced their gold forecast for 2012, but all keep it in the 1620 range or higher. Current prices are well below forecasts.

Refiners can’t deliver immediate gold because there’s a sudden surge in demand. We are seeing demand from India, Thailand and Indonesia due to the marriage season and the end of the jewellers strike in India.

Bullion traders have resumed purchases after a gap of two months and started building inventories, traders said. This is a good time for buying gold, and imports of the metal are expected to touch 60 tonnes this month compared to 35 tonnes last month. With the prices trading this low, many users and investors are buying up gold to hold for a later time.