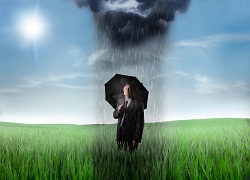 Is the losing period I’m currently experiencing down to my strategy, or just bad luck through ‘outlier’ events?

Apr 18 • Between the lines • 9056 Views • 1 Comment on Is the losing period I’m currently experiencing down to my strategy, or just bad luck through ‘outlier’ events?

Luck is a very contentious word and equally contentious phenomena in trading. Having spent months and in many cases years to create a winning trading strategy, to then finally commit it to our bullet proof trading plan, it’s incredibly hard for any of us to actually accept that a huge element contained within our long term trading success is down to the simple phenomena of luck.

To accept that we are at the mercy of the market and that none of us can predict, with any regular degree of certainty, what the market will do next is an incredibly hard concept for many of us to grasp. It’s as difficult to accept the notion that a huge percentage of our trades will have to be losers in order for us to be consistently profitable. Both of these notions are, as we’ve mentioned in these columns previously, counter intuitive to how we’re ‘wired’ to approach the many tests and trials our industry forces us to face up to on a daily and weekly basis.

After we’ve spent many months (or years) to create our successful trading strategy and have spent an equally proportionate amount of time to develop the self-discipline to stick to our trading plan, it can prove to be quite a blow when our trading strategy begins to fail and we either reach, or are beginning to threaten the drawdown levels we put into our trading plan. But at what point do we give up on our plan and strategy is a difficult proposition to face up to.

How we take an emotionless step back, in order to further analyse our strategy, before tweaking it or abandoning it completely, is one of the major tests we’ll face as traders and in many ways this ‘trial of trader life’ will define us as traders. And in re-analysing our trading strategy we can begin to uncover whether or not luck has played any part in our recent losses. But where do we look for the signs in our recent trading history that simple bad luck has played a significant part in our trading and that there’s nothing wrong with our method and overall trading strategy?

Outliers*, what they are in terms of trading and where to look for signs of them

As regular readers of our columns will have deduced we publish a weekly article titled “is the trend still your friend?” in which we analyse the fundamental backdrop that’ll determine the current week’s high impact publications and policy decisions. Twinned with this we also overlap a very basic form of technical analysis utilizing many of the most commonly used and referred to indicators. What has been of note recently has been the effect of what we’d term outliers and the affect they’re having on the markets we trade.

The most glaring outlier has been the issues in Ukraine, as tensions began over the Crimea region the markets sold off, in particular in European equity indices and then the euro. As the problems receded the markets began a recovery of sorts. Then we had doubts that (as earnings season began in the USA) many of the tech companies quoted on NASDAQ actually deserved the massive valuations versus their earnings that they currently show. Then we have experienced a recovery, but over the past two days Ukraine fears have re-appeared as armed conflict between Russian friendly factions in many Ukraine cities and the authorities in the newly formed Ukrainian govt. have reached a violent conclusion.

Now looking at all these recent issues in isolation, or as a cluster, many traders will have found themselves at times, depending on whether or not they’re swing traders or day traders, on the wrong side of the market moves through no fault of their own other than sticking to their plan. Quite frankly the listing we’ve provided of recent activity was impossible territory for many traders to trade over recent weeks, in particular for swing traders and that’s before we begin to add in all are other usual fundamental criteria such as base rate decisions, unemployment and other economic data stats. As if our profession wasn’t tricky enough we’ve had to contend with an incredible complex variety of fundamental issues over recent weeks, small wonder that many of us will have lost some temporary ground leaving us doubting our overall method and trading strategy.

It’s impossible to predict when statistical outliers will happen and it’s equally difficult to realise that we might be in the firing line of an outlier event as it’s taking place as many of the outliers in our business are not the pure stats outliers statisticians and mathematicians can, in retrospect, point out. Moreover, we can’t trade the past that our stats and maths experts identify.

But what we can do, as our experience grows, is adjust our ‘trading antennae’ to be aware of when we’re in the middle of the maelstrom outliers can and will cause. We then have two simple choices; to trade or not trade…

We either trade through the storm the outlier is causing, or hunker down and sadly only hindsight will prove to us which was the correct decision. However, whilst it’s natural to question your method and strategy during an outlier occurrence without a doubt it’d be the wrong time to alter or stop a previously proven methodology. The time for reflection has to come once we’ve identified that ‘normal’ trading conditions, or as normal as we can expect in the dynamic world of trading FX, indices, or commodities, has once again returned to our trading environment.

In statistics, an outlier is an observation point that is distant from other observations.[1] An outlier may be due to variability in the measurement or it may indicate experimental error; the latter are sometimes excluded from the data set.[2]

Outliers can occur by chance in any distribution, but they are often indicative either of measurement error or that the population has a heavy-tailed distribution. In the former case one wishes to discard them or use statistics that are robust to outliers, while in the latter case they indicate that the distribution has high kurtosis and that one should be very cautious in using tools or intuitions that assume a normal distribution. A frequent cause of outliers is a mixture of two distributions, which may be two distinct sub-populations, or may indicate ‘correct trial’ versus ‘measurement error’; this is modelled by a mixture model.

In most larger samplings of data, some data points will be further away from the sample mean than what is deemed reasonable. This can be due to incidental systematic error or flaws in the theory that generated an assumed family of probability distributions, or it may be that some observations are far from the centre of the data. Outlier points can therefore indicate faulty data, erroneous procedures, or areas where a certain theory might not be valid. However, in large samples, a small number of outliers is to be expected (and not due to any anomalous condition).