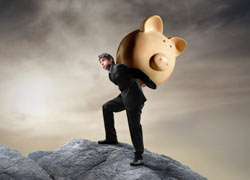 How Much Do I Need To Get Started Trading Forex?

Perhaps the most frequently asked question, by anyone considering trading forex for the first time, is often met by a variety of over complicated answers when the first answer should in fact be a question aimed directly back at the potential trader; “how much have you got to lose?” Actually that’s a bit harsh, allow me to re-phrase, “how much can you reasonably afford to lose, in your first experimental adventure into the world of forex trading, that won’t unnecessarily impact on yours or your family’s welfare?”

That first piece of advice delivered as the question; “how much do you have to lose” is advice most traders are never given. Throughout all the introductory material on forex brokers, or spread betting firms’ websites, it’s conspicuous in it’s absence. Despite all the warnings with regards to regulatory compliance the practicalities of trading are very rarely addressed. There are firms who offer ‘micro-mini accounts’, FXCC being one, who also provide Currenex as part of the micro-mini package, but very few advise as to what level you should fund your first account.

Certain spread betting firms allow you to trade the equivalent of mini/micro lots for a short introductory period, six weeks being the average, which is a relative blink of an eye for traders learning what can be quite a daunting new skill set. When the average time to move from proficiency to profitability is two years, six weeks offers little chance or time to prove to yourself up to the levels of consistency required in order to cope with the range of tests you’ll face during all the market behaviour you’ll encounter.

The ideal would be to open a new account (as a new trader) with the minimum account level required by the forex firm, if that figure is $500 or €500 then open with new traders should fund their first account with no more than that, presuming the ability is present to trade micro lots ensuring that you can still trade effectively and not have to risk more than 2% per trade. You should therefore be risking no more than $10 per trade.

Unless you are an extraordinarily gifted trader then that first account is likely to fall in value considerably before you experience success on a consistent basis, most likely it’ll disappear, you’ll be wiped out. Don’t look upon it in percentage terms, if it falls by 50% don’t mentally beat yourself up, after all is said and done it’s only $250 dollars. Instead of admonishing yourself over such a small loss applaud yourself for having the overall intelligence, foresight and self discipline to risk such a small amount initially, would you rather lose 50% of €500 or 50% of €5,000 when taking your first tentative steps into a new venture?

All thoughts of profitability should be put to onside initially, how long can you make that first account last should be the first objective. How long can it last, taking perhaps a maximum of five trades per week on the one security, such as eur/usd, If you operate 1:1 risk reward as part of your trading plan? If you experience twice as many losers as winners your account could last circa six months, during which time you’ll have gained plenty of experience under your belt. If your risk reward is 2:1 then you may be close on break after a series of close on 100 trades, and if you reach this level some self praise is needed. Let’s not forget that most small business operators make a loss in the first two to three years, therefore performance above this level is to be commended in whatever field you engage with.

Should you reach break even, after a series of one hundred consecutive trades, having planned your trades and traded your plan, then you have surely developed the skill set and consistency to feel confident in taking the next step; funding your account to the next level, a level at which you can begin the next leg of your journey towards consistent profitability. But it all starts with that first small step by funding that first small account. How much do you need in order to start trading forex? A lot less than you think if you manage yourself and your risk appropriately and set (achievable) short, medium and long term goals…

« Is The Greek Debt Swap Deal Really On A Knife Edge? Italy’s Traffic At A Standstill On Monday Whilst Germany Discovers New Avenues To Avert The Eurozone Crisis »