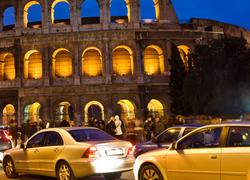 Christine Lagarde, head of the International Monetary Fund, has urged European leaders to commit greater resources to protecting the eurozone. Lagarde said that the European Stability Mechanism should be enlarged beyond its current €500bn limit, giving more firepower to protect Italy and Spain. Lagarde also proposed that the new fiscal compact should include provisions for eurobonds, and warned that the global economy could be dragged into a downward spiral.

EU finance ministers gathered in Brussels to discuss the crisis. Austrian and Dutch officials took a hard line on the Greek negotiations, warning that private creditors could be forced to take losses if a voluntary deal can’t be reached.

Greece pushed back its target for presenting a final deal to its creditors to 13 February. The news broke tonight. Earlier, finance minister Venizelos said that negotiations with the private sector had gone well, despite the head of the Institute of International Finance warning over the weekend that the IIR had reached its maximum potential losses.

Italy was hit by widespread traffic disruption as part of protests over Mario Monti’s economic plans. Taxi drivers went on strike in major cities, while truckers blocked some key highways.

Germany floated the idea of combining Europe’s two rescue funds, in a concession to bolster the fight against the fiscal crisis as Greece bargained with bondholders over debt relief.

Germany may be open to boosting the combined aid limit from 500 billion euros when a permanent fund runs alongside the temporary fund starting in July, government officials in Berlin said. The need for a beefed-up fund was dramatised by haggling between Greece, the trigger of the two year old crisis, and its creditors over debt reduction to stave off default.

Market Overview
The euro strengthened to an almost three-week high against the dollar as French Finance Minister Francois Baroin said negotiations between Greece and its private creditors were making “tangible progress”.

The 17-nation currency gained versus 13 of its 16 major counterparts as European Union finance ministers gather in Brussels to discuss a Greek debt swap, budget rules and a financial firewall to protect indebted nations. Norway’s krone and Canada’s dollar rallied versus the dollar as oil gained after the European Union agreed to ban crude imports from Iran.

The dollar has weakened 1.5 percent in the past month, according to Bloomberg Correlation-Weighted Indexes, which track 10 developed-nation currencies. The yen is little changed, and the euro has slipped 1.7 percent.

Canada’s dollar appreciated to within a cent of parity with the U.S. currency as leading economic indicators increased for a sixth month in December, according to Statistics Canada. The loonie gained 0.5 percent to C$1.0086 per U.S. dollar. It has not traded above parity since Nov. 1.

The pound fell 0.7 percent to 83.59 pence per euro after profit alerts increased by more than 70 percent in the final quarter of 2011 at U.K.-listed companies, the biggest jump since the first three months of 2001, according to Ernst & Young LLP.

The Standard & Poor’s 500 Index rose for a fifth day, led by the energy sector/s, as natural gas rebounded from a 10-year low and investors weighed Europe’s efforts to tame its debt crisis. The euro approached its strongest level of 2012 whilst Treasuries fell.

Oil rose 1.3 percent to $99.58 a barrel, snapping a three-day fall, after the EU agreed to ban crude imports from Iran, raising concern over supplies in the Middle East. The S&P GSCI gauge of 24 commodities increased 1.1 percent.

« How Much Do I Need To Get Started Trading Forex? Greek & Euro Ministers Play Game Of Show & Tell With Private Bondholders »